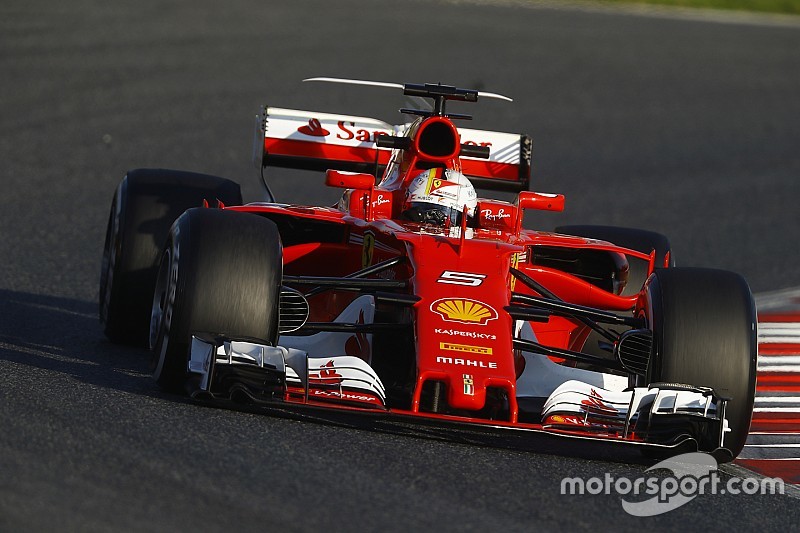 Sebastian Vettel believes the 2017 breed of Formula 1 cars "fix everything" compared to the previous generation because they have so much grip.

Ferrari was arguably the standout team on the third day of the opening pre-season test at Barcelona, with Vettel just two tenths of a second down on Mercedes' Valtteri Bottas, despite only using the soft tyre compared to the Finn running the ultra-soft.

When asked by Motorsport.com what impressed him about the car compared to last year's Ferrari, Vettel said: "From a driver's point of view it's better everywhere.

"Braking is better, cornering is better, you've got more grip. Then in low-speed corners when arguably the downforce effect is less big, you have more grip from the tyres.

"It works pretty much like an aspirin, it fixes pretty much everything. It's difficult to compare [to 2016], it's a different animal, different beast."

Despite Ferrari looking strong so far this week, Vettel said its start to testing "could have been better".

"Everybody is pushing like crazy – there is a lot of work ahead of us," he added. "We've had a good three days, could have been better but we did a decent amount of laps.

"We still have a lot of stuff where we know we need to improve. We had a quiet winter where we really tried to focus on what's important and it's the same here: we try to do our job.

"At this time we have a lot of stuff on our list – it's a very long list."

Vettel said he expects every driver to be happy with the first impressions of their car because of the effect of the new rules, and he believes there are far more important things going on in testing beyond the headline times.

"It feels better than last year but I think everyone is saying that. When you can go faster as a driver it's always nice to be able to push harder.

"I didn't pay much attention to what the others are doing. Everybody is looking at one lap time but it's much more important what happens throughout the day and that's difficult to read."

Red Bull "can be very close" to Mercedes and Ferrari - Ricciardo

Stroll unfortunate to join F1 in "the toughest year" - Hamilton