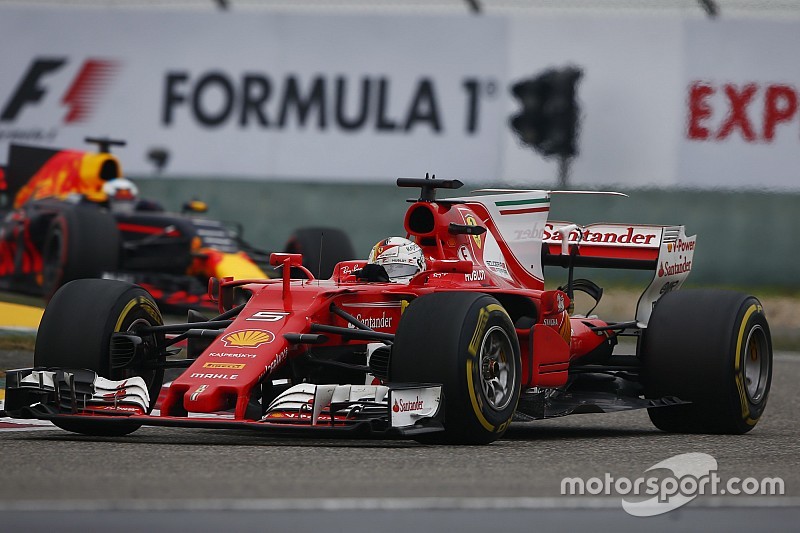 Sebastian Vettel believes the deployment of the Formula 1 safety car after Antonio Giovinazzi's Chinese Grand Prix crash was "unfortunate" as it eliminated the potential advantage of his early pitstop.

The Ferrari driver pitted for slicks under the virtual safety car deployed on the first lap thanks to Lance Stroll's stricken Williams, but as Giovinazzi crashed moments after the race was restarted, the other frontrunners were then able to stop under safety car conditions.

This meant Vettel could not capitalise on the period he believed he would have had a pace advantage in on slicks, and it left him in a queue behind the Red Bulls of Max Verstappen and Daniel Ricciardo and teammate Kimi Raikkonen.

The German hinted this would have transformed his battle with race winner Lewis Hamilton, who he finished 6.250s behind.

"I realised the inters had quite a log of degradation, I knew it was dry in some parts of the track and I was happy to take the risk," said Vettel of his early stop.

"But the safety car came in just as I could feel the dries were a lot quicker, so I lost a lot of positions.

"I just go with the fact that who won the races deserves to win, every race we done. Lewis did the best job, even though we were a bit unfortunate with the safety car.

"Who knows, it was a long race from there, I had a bit more to do than he had."

Once he had made his way up to second, Vettel enjoyed the battle with Hamilton, even though he never got close enough to seriously threaten the Mercedes driver.

"I tried to hunt him down, but knowing it would be difficult in the last few laps I asked for an average [time], and when they came up with a conclusion it was a bit more than half-a-second," said Vettel.

"I kept pushing in case he made a mistake and I enjoyed the fact we were racing, even if not side-by side.

"I think in pace it was a bit matched, sometimes he was faster and sometimes I was faster."

Hamilton echoed Vettel's sentiments on how closely matched they were after claiming his 54th grand prix win.

"There were other times when he was faster."