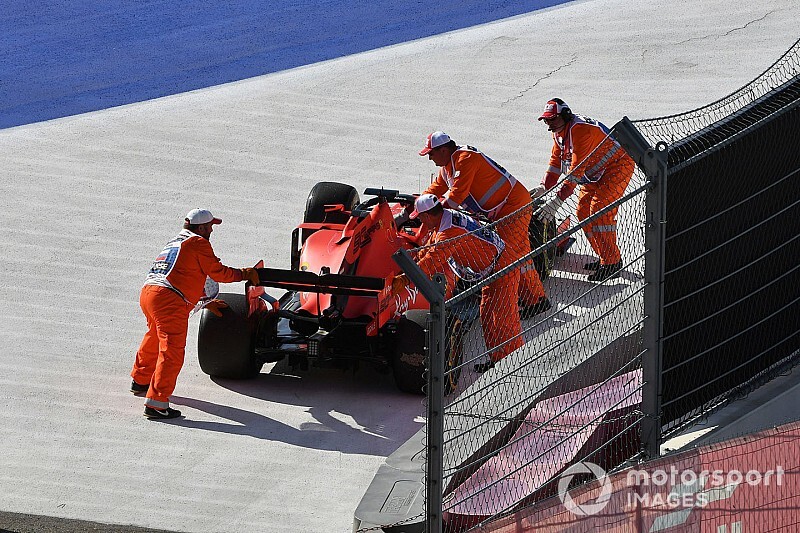 Ferrari couldn't have avoided bringing out a costly virtual safety car after Sebastian Vettel's failure in the Russian Grand Prix, as team boss Mattia Binotto says it had to stop the car immediately for safety reasons.

Vettel encountered a hybrid issue shortly after making his pitstop, and he obeyed instructions and parked on the circuit just sort of the pit entry. He then jumped out, as he had to assume that the car was “live.”

That in turn allowed Lewis Hamilton to make a quick pi stop, allowing the Mercedes driver to jump erstwhile leader Charles Leclerc, who had previously stopped under green-flag conditions.

“We had a problem on the hybrid side of the power unit,” said Binotto. “We had a loss of insulation on the car.

"And for safety reasons, we could stop immediately. It’s a shame because maybe 100 metres later we had the pitlane, but it was the safest action we could do for Seb, and obviously safety is first.

“[It was] only for safety. If it would've been for the rest of the car, we would've maybe stopped in a different position. But there was really an instruction, ‘As soon as you can, stop,’ because of the safety."

Asked if such situations usually involved safety issue for the driver, he said: “Normally not. But obviously, not being fully aware on what was the damage and the problem, we knew that there was a loss of insulation, and you're right, normally there is no issue for the driver.

“But you're in areas of maybe it's not fully well-known, because you don't know exactly what's the issue. For us it was safety.

Binotto believes that despite the control electronics being damaged Vettel won’t face a grid penalty in Japan, as he still has one in the pool from earlier in the season.

“Now we will need to see, probably we lost the power electronics, but we've got another one. So [a penalty] is not intended, we'll instead use the other one.”

Race director Masi explained that a VSC was inevitable, given that the marshals had to deal with a hybrid issue.

“[It was] because the car was unsafe from an electrical point of view, and it stayed unsafe for the rest of the race,” said the Australian. “To recover it in the safest possible manner and put marshals out there to do so, it was a very simple decision to put out the VSC.

“Moving it back into that hole because of the electrical issue, we made sure it was well and truly clear and in a safe position before going forward. From our end you’ve just got to be far more cautious.

“Putting people trackside in that area, there’s a reason there’s a whole lot of TecPro there. It’s because people can go off. Wasn’t even a second thought [about the VSC]."

Masi praised Vettel for stopping where he did, saying: “Sebastian did a fantastic job pulling it up as close the vehicle opening that he did.

“Even the fact he virtually turned it around to make it as easy as possible to get back into the hole, he can only do so much. In the circumstances I think Sebastian did absolutely the best job he possibly could.”