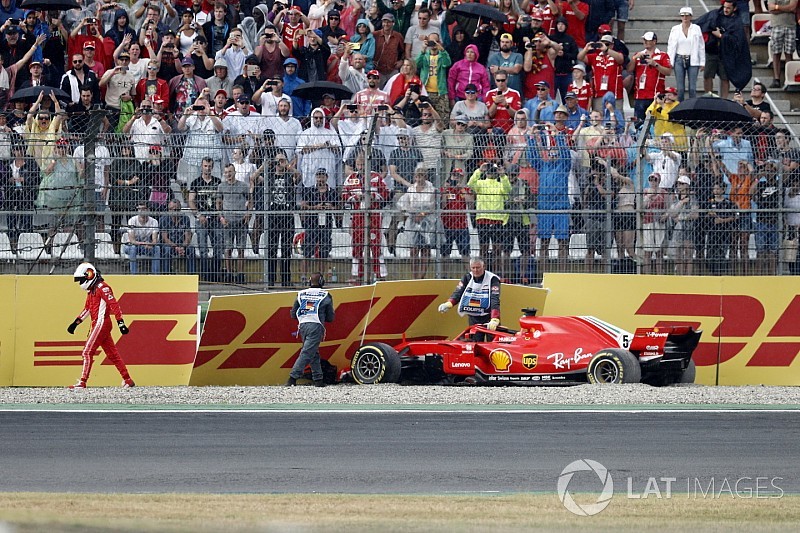 Sebastian Vettel says he won’t have trouble sleeping following the error that caused him to crash out of the lead of the German Grand Prix.

The Ferrari Formula 1 driver appeared on course to extend his championship lead over Lewis Hamilton with a victory on home soil at Hockenheim, but he slid off the road and collided with the barriers in the stadium section at the end of lap 52 when a brief rain shower hit.

Asked by TV crews how he could process such a disastrous outcome, Vettel said: “I was in the barrier, and I realise I don’t get out from there, so how do you process that?

“But it’s not like tonight I will have difficulties to fall asleep because of what I’ve done wrong.

“It’s disappointing because up to that point everything was sweet. We didn’t need the rain.”

Vettel said he would go away from the weekend looking at the positives about Ferrari’s performance, having taken pole position and led the race.

“We have a strong car, so we can be as confident, more confident than anybody else,” he said.

“It was a very positive weekend, just one of those moments, and my mistake.

“Apologies to the team, they did everything right and I had it in my hands. Small mistake, big disappointment.”

Vettel now trails Hamilton – who won the race from 14th on the grid – by 17 points in the championship.

German GP: Hamilton wins from 14th as Vettel crashes out