Vettel "not blaming anybody" for failed Ferrari tyre gamble 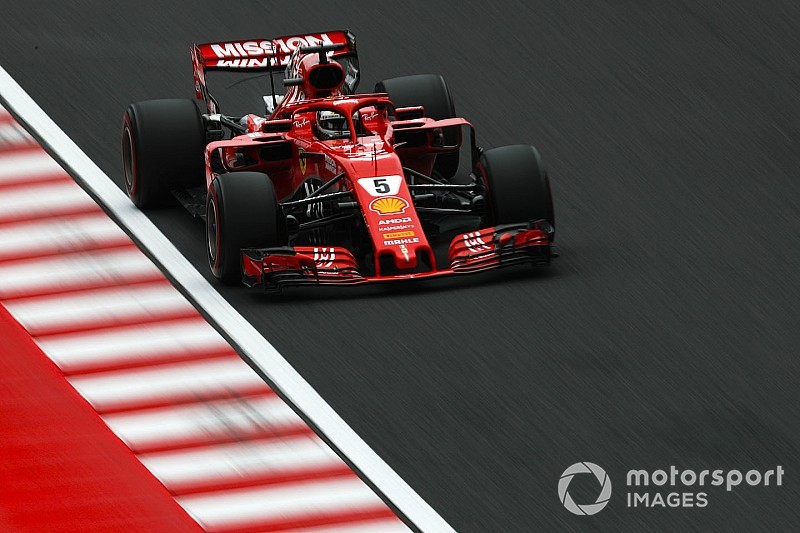 Sebastian Vettel says he is "not blaming anybody" at Ferrari for the failed tyre gamble during qualifying for Formula 1's Japanese Grand Prix.

Vettel and teammate Kimi Raikkonen were the only drivers to be sent out on intermediate tyres at the start of Q3, but both returned to the pits after just one lap as the track was dry.

With rain hitting the circuit at the end of the session, the time lost at the start proved crucial, as Vettel wound up ninth after a poor fastest lap.

"I think, why we took the decisions, five or six minutes later it started to rain quite heavy so there was something in the air," said Vettel.

"I think we expected there was more rain coming and obviously it didn't so then it was the wrong decision. When the conditions are like this then either you get it right or you get it wrong.

"So I'm not blaming anybody," added the German.

When asked who had made the decision, Vettel said: "Why does it matter? Our call."

Vettel, who is set to start the race eight places behind championship rival Lewis Hamilton, made a mistake on the only flying lap that he managed to complete, but said the track was still in good condition.

He conceded the tyre call made Ferrari "look stupid", but insisted he stood by the decision.

"It [the track] was OK. I lost it into Turn 14 so that was obviously the only lap that I had, which didn't help," he said.

"We obviously lost a bit of timing due to that in the beginning but as I said, if it starts to rain five/six/seven minutes earlier, then we did a miracle because we're the only clever ones.

"And if it's like that, we're the only ones looking stupid.

"As I said, therefore I defend the decision, it's our decision as a team. Obviously it wasn't wet enough to start with and the rain didn't come, it came later."

Vettel finished behind Raikkonen, who qualified fourth despite also making a mistake on his flying lap.

The Finn reckons that Ferrari got off lightly from its tyre gamble.

"You have two decisions and one is right and one is wrong. We got it wrong. At least it wasn't a complete disaster after that. We managed to put one lap, kind of okay even with the mistake.

"I think we got away lightly from it."