Vettel: No fears Russian cold will hold Ferrari back 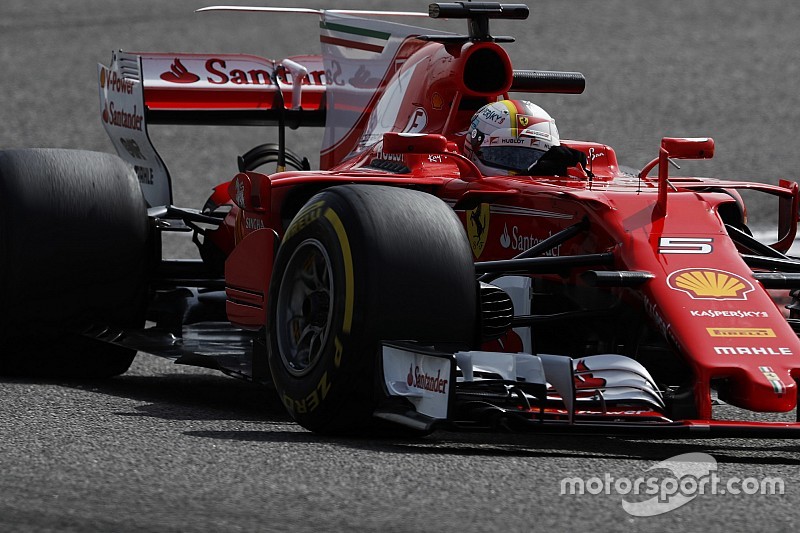 Sebastian Vettel says there is no reason to believe that Ferrari will be left on the back foot against Mercedes at the Russian Grand Prix because the conditions will be cooler.

With Ferrari’s 2017 car appearing better suited to warmer weather, the prospect of a chilly Sochi weekend has lifted hopes from rival Mercedes that it can bounce back from defeat in Bahrain.

Mercedes’ belief is further boosted by the fact that the track surface in Russia is very smooth, which means that tyre degradation will not be as much of an issue as it was in Bahrain last weekend.

Indeed, Lewis Hamilton said after his day of testing in Bahrain this week – which was focused on improving tyre understanding – that the Russian GP would be a different type of weekend.

“Sochi is a smoother track and less abrasive on the tyres, so they can go quite a long way,” said the former world champion. “Hopefully we can rely on the pace of our car there rather than our use of the tyres.”

But although Ferrari is well aware that Mercedes’ single-lap pace advantage is likely to remain for some time, Vettel does not feel that losing a potential edge on long-run form will cost his team too much.

Asked after testing in Bahrain this week if he was bracing himself for a hard weekend, Vettel said: “I don’t think so, I think we will manage. We managed as well in China and it was quite cold, so I think it will be OK. We’ll see.

“I don’t know the forecast yet, but usually they change. We’ll see when we get there.”

Haas driver Romain Grosjean thinks that the low degradation in Sochi will allow drivers to push for a very long stint in the race – and the real challenge of the weekend will be switching the tyres on for qualifying.

“Push every single lap!” he said about his predictions for the weekend. “It will 50 laps first stint, then five laps on supersofts!”

Asked about qualifying, he said: “It's going to be tricky. The out-lap is key. With the downforce we have this year, we have a bit less problem to switch them on. That was a concern initially, but we didn't have any problem in China or in Melbourne.

“In Bahrain we needed a very slow out-lap so that made it a bit of a mess before the last corner. Russia we may need a bit of a harder out-lap and hopefully it's going to be fine.”