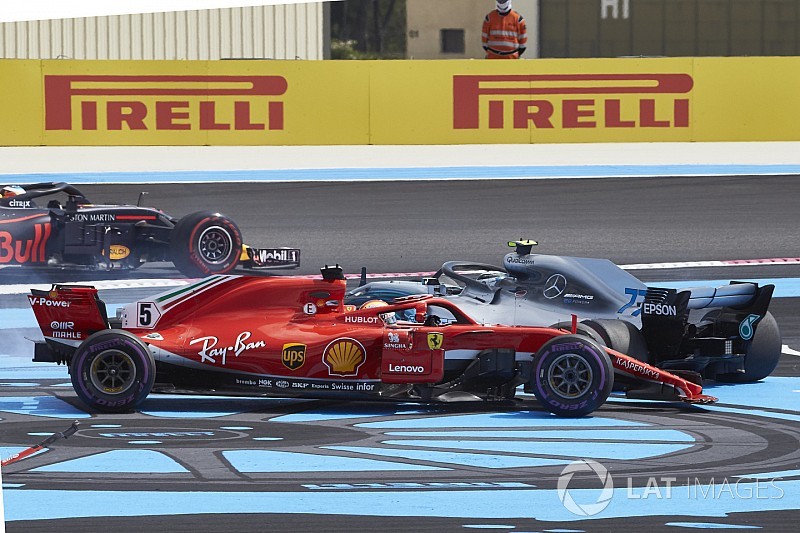 Mercedes Formula 1 team boss Toto Wolff believes recent mistakes made by Sebastian Vettel could come back to "bite" the Ferrari driver when the 2018 title is decided.

Vettel was penalised three grid positions for impeding Carlos Sainz, and while the stewards noted that he had not been properly kept informed by the Ferrari pit wall, they also observed that he had erred by running slowly on the racing line.

The grid penalty comes just a week after Vettel collided with Valtteri Bottas on the first lap in France, costing himself vital points.

“I think in order to win a championship you need to be as fast as possible, as reliable as possible, and with the least errors,” said Wolff. “But sometimes it’s very difficult to put all these together.

“I’ve said it before, Sebastian’s biggest strength is his ambition, but sometimes like in Le Castellet it went against him.

"I think every team is aware you have to get out of the way in order to not have a penalty, and all drivers are instructed by their engineers about what’s happening behind them.

“I think it's important to try to collect every single point that's there, and when you leave some on the table, that could eventually come and bite you.

"And this is the difficulty of being in the car, you need to be aggressive and you need to extract every bit of performance you have, but equally try to avoid the mistakes.

“And they happen quickly. We've had situations, remember Melbourne, our first race, where we were just not good enough, we made a mistake and lost the lead. So it happened to us as well, and this is going to be how the season is going to go, trying to extract performance and minimise mistakes.”

Wolff acknowledged that the Vettel penalty has potentially made life easier for Mercedes on Sunday, although he didn’t discount Kimi Raikkonen, who now starts third.

“I mean, Kimi's still there. And what we have said is that the Ferrari is particularly strong on traction out of Turn 3, and into Turn 3 it will be difficult, so the problem is not solved, there is a Ferrari that performs well. But obviously the situation is more comfortable like this.”

Wolff was keen to credit recent power unit and chassis upgrades with the upturn in Mercedes form since the Canadian GP, and which has allowed the team to edge clear of Ferrari.

“Spielberg certainly treated us well in the past, we’ve won four out of four races so you can say that the track has suited the car and the drivers.

“But certainly you can see Montreal was also our track in the past, and we weren’t able to win the race there, because we lacked performance and the others brought the engine upgrades. We couldn’t, and this is the one or two tenths that could make all the difference this year.

“And obviously in Le Castellet and now we’ve brought the engine upgrade, we’ve brought the chassis upgrade, and that’s given us a little buffer again. That development race is going to continue and you need to bring performance possibly to every race, if you can.”

Alonso to start from pitlane after wing change