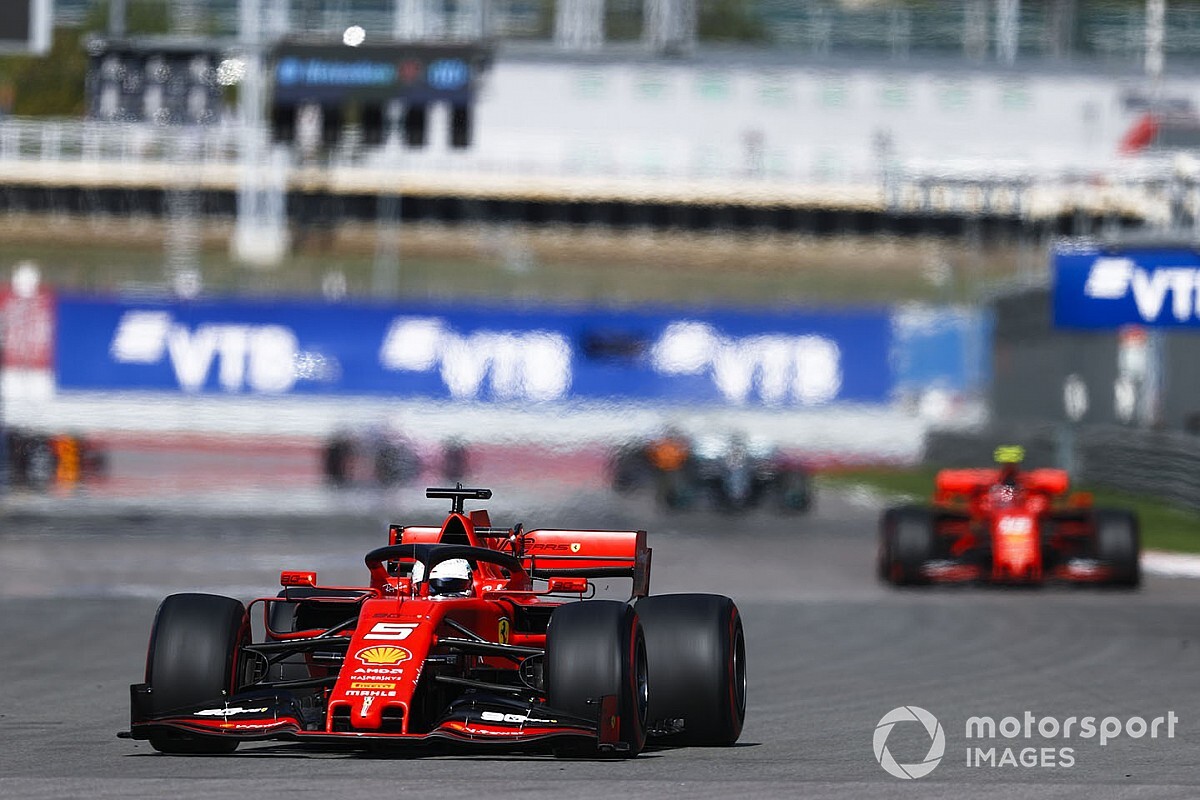 Sebastian Vettel feels he stuck to the pre-race agreement made by Ferrari ahead of the Russian Grand Prix, despite failing to acquiesce to an order to let Charles Leclerc by.

Vettel, who had started third, grabbed a slipstream off poleman Leclerc at the start and passed him into Turn 2, going on to lead the race until his sole pitstop.

Conversations between the Ferrari pitwall and Leclerc indicated the Monegasque deliberately towed Vettel and allowed him through - which was corroborated by team principal Mattia Binotto after the race.

However, while Leclerc had been expecting the positions to be swapped back right away, and Ferrari duly ordered Vettel to do so, the German did not yield.

Vettel instead told Ferrari it should tell Leclerc "to close up", and extended his advantage over the Monegasque from around a second and a half to four seconds over the subsequent laps.

Vettel - who would retire with an engine issue after his pitstop - refused to be drawn into the specifics of the pre-race agreement when speaking to TV crews afterwards, but said: "I think I stuck to the agreement.

"Obviously it was a big shame because I think we had a good chance today to finish first and second."

When again quizzed on his view of the pre-race agreement after it had been explained by Binotto in Ferrari's subsequent media session, Vettel said: "I think on my side it's best if I don't say anything. I think Mattia gave an explanation which is valid, so [let's] leave it there."

Binotto subsequently said that he felt neither driver had been in breach of the pre-race agreement.

Ferrari had pitted Leclerc earlier than Vettel, and the Monegasque's laps on fresh mediums allowed him to cycle back ahead of his teammate once Vettel had been called into the pits, too.

Asked whether he would've been open to letting Leclerc through had he remained ahead through to the end of the race, Vettel said: "Well, obviously, I don't know what happened, I wasn't really aware when Charles was going to pit, because obviously you do your own race.

"I was aware of the fact I was quite a bit down the road. And obviously the last laps before the pitstop I was struggling more and more with the tyres. So I realised that obviously it would be time to pit.

"When I got out, obviously I found myself behind, then I had a problem and so on - and obviously the bigger downside was the fact that we had to retire.

"It didn't come to that stage [where I'd have to consider a late-race swap], so it's a bit pointless [to discuss now]."