Vettel improves and Ricciardo struggles on practice day at Hungaroring 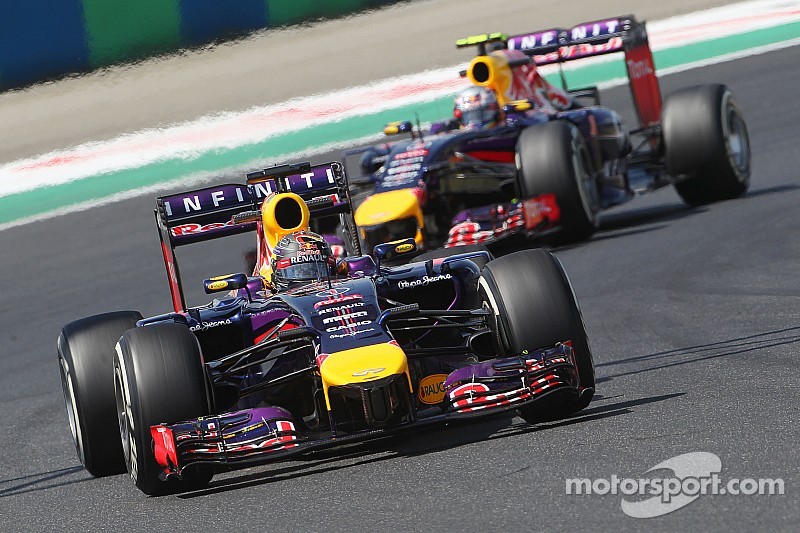 Daniel Ricciardo: “To be honest we struggled quite a lot today trying to find the grip."

Sebastian Vettel:  “I think we could be a little bit closer this weekend, at least today it looked a bit better, but then again we saw that people can make a big step from Friday to Saturday, particularly Williams, so we have to be careful. We hope we can do a big enough step to keep the pace of today (for tomorrow) and to be able to use a little bit more power, but we’ll have to wait and see where we are.”

Daniel Ricciardo: “To be honest we struggled quite a lot today trying to find the grip. This circuit does tend to ramp up a lot over the weekend, this morning’s session the grip was really low for everyone and we saw a lot of people sliding. We thought we would find some more this afternoon but we didn’t quite evolve with the track, so we’ve got a bit of work to do tonight to understand that, but that’s what Friday’s are for, you learn, you try things and hopefully you put it all together Friday night in the best way for qualifying.”

In our Tenth Season of Racing: A 10 Times Table

From the fractions of a second that make the difference between victory and defeat, to the minutes and hours rushing to prepare the car and on to the high-pressure weeks and months spent in design and development, F1 is defined by timing. All those moments build to form the shape of race weekends, of seasons spent battling against the best in the world and sometimes emerging triumphant.

In the 10 seasons we’ve been racing, we’ve had our fair share of those moments. To kick off this final weekend before the summer break, we took a look to see what 10s we could find. Here’s our 10 times table.

In 10 Seconds – Our F1 car can travel 494m from a standing start. Given another 10 seconds (and four pit crews!) we could also do four pit stops, changing 16 tyres

In 10 Hours – Based on his average German Grand Prix speed, Sebastian could travel 1946.81km. That’s approximately from our HQ in Milton Keynes to Rome. Daniel’s fastest average speed so far this season was in Austria at 207.816kph (so 2078.16km), so he might almost make it to Naples.

In 10 weeks – We can design a completely new car. By contrast a major motor manufacturer will typically need three years to bring a new model from design to manufacture.

Hamilton on top again in Hungary