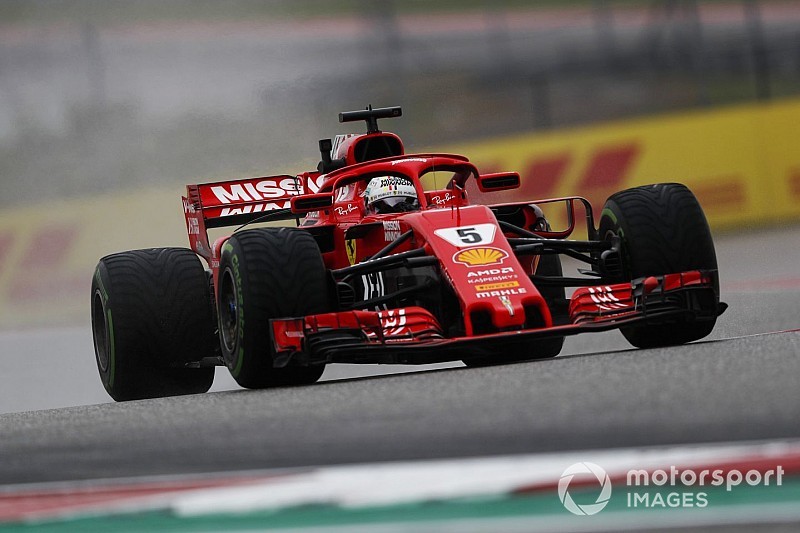 Sebastian Vettel thinks the way that Formula 1's red flag rules are policed is wrong, after being handed a three-place grid penalty for not slowing enough in practice for the United States Grand Prix.

The German was deemed by the race stewards to have not slowed enough when the opening practice session was red-lagged to allow marshals to clear gravel off the circuit.

With Vettel adamant he backed off enough to respect the red flag rules once the session had been stopped, he is unhappy about the way that precise delta times are used to judge if a driver has gone too quick.

"I think there should be common sense with the rules that we have," said the Ferrari driver. "I think lining out 27.7 seconds precisely as not complying with the rules I think is wrong.

"I think I slowed down, I had a good look around at what was going on. The rules are clear so we know.

"It is the first time we had this in the wet, where the target is a lot slower, so literally you have to stop to 40-50km/h to bring down the delta, which probably I should do next time.

"But in my opinion that is not the right thing. If there is a car right behind you, it might run into you. But it is more important you don't get a penalty."

Vettel said he explained to the stewards that he had seen the red flag when it came out, and he reacted once he had checked there was no danger.

"They [the stewards] were very specific, saying I took 27.7 seconds to slow down," he explained.

"I saw the red flag, I slowed down, I had a look around where the car was potentially stuck in the wall or if there was one around Turn 9 or 10. Then I slowed down significantly to comply with the rules.

"They found it too long. I think it was straightforward.

"On top of it there might have been an issue with the timing, the system. I don't know. So...I slowed down."

Beyond the issue with the red flag penalty, Vettel said that the performance of Ferrari on track had not been encouraging either – after title rival Lewis Hamilton topped both sessions.

"I think we had enough laps and I think it is clear that we were not competitive today," he said. "We are missing quite a big chunk of performance."

Why there's no reason to expect a Ferrari fightback