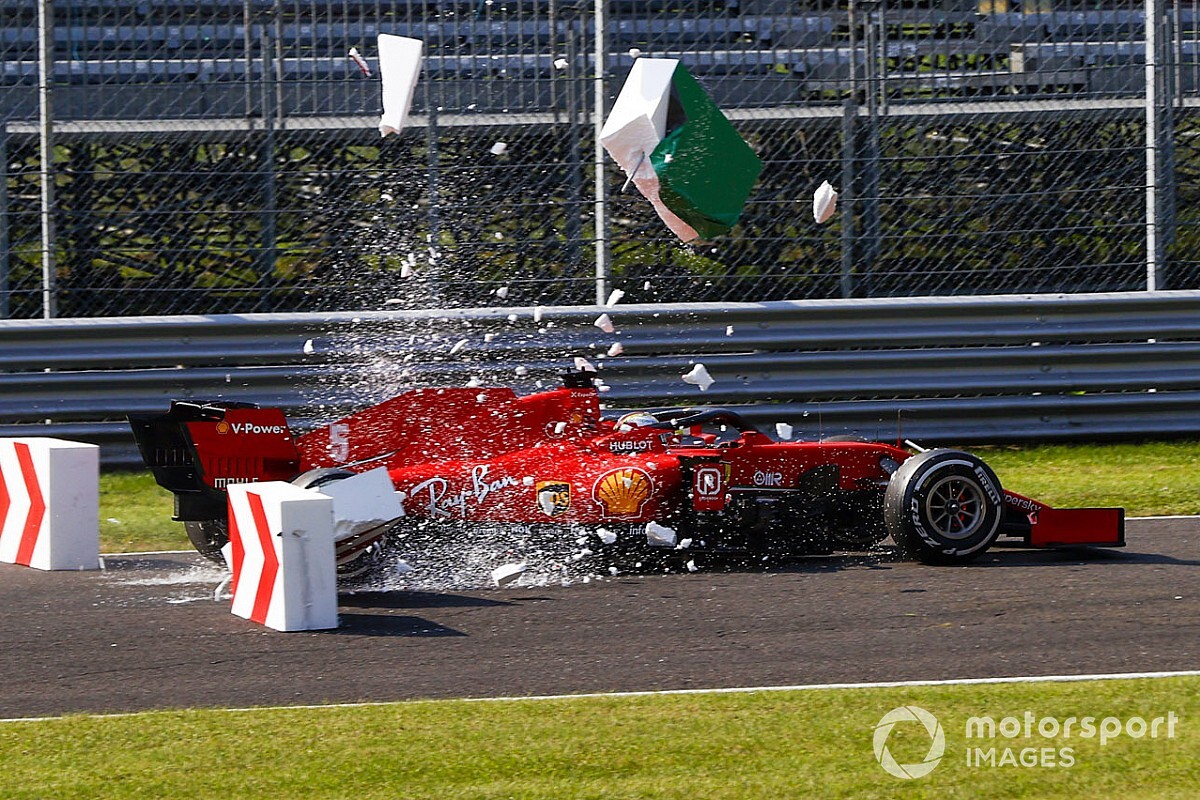 Sebastian Vettel says he is glad that there were no fans at Monza this year after Ferrari endured another nightmare showing in the Italian Grand Prix.

Having struggled for pace in qualifying, Vettel and Charles Leclerc failed to make it to the chequered after both were forced out in spectacular incidents.

Vettel suffered a brake failure at the first chicane and smashed through the polystyrene blocks in the escape road, while Leclerc had an off at Parabolica and crashed heavily – bringing out a red flag.

Reflecting on another bruising encounter for the Maranello team, Vettel said that it was probably a blessing in disguise that the loyal tifosi were not there to witness what happened.

"I think this year is very different and I think probably in that regard it is good that there are no fans," he said.

"Life is like this. It always depends where you are looking, and I think even if, at the moment professionally, there are not many good things, there are always some positives. So it is just a question of what you focus on.

"Certainly it was tough for all of us because our main focus is on the car and the race, especially racing at Monza. But we have to keep our head up and look forward to next week and to look at the positives, even if there are very few."

Vettel said he was glad that his brakes failed on the entry to the first chicane, because there was a lengthy run-off area that allowed him to slow down without too much danger.

"It [brake failure] is actually the worst thing, but at least it happened in probably the best spot. So if it happens elsewhere it is not so nice.

"I completely lost the pressure on the pedal and went straight. On the laps before we ran into trouble, we managed the brakes but it was quite bad.

"We need to understand why and fortunately it happened in Turn One where there is a lot of run-off, but I have never had a brake failure like that."

Teammate Leclerc also endured a nightmare day, as an error on the lap after a safety car resulted in an off at Parabolica that brought out the red flag.

"I just lost the car," he said. "It is my fault and it was a very difficult race to be honest as I struggled quite a lot on the first set [of tyres].

"Then I thought we were unlucky with the safety car but, with the pitlane closed, we were actually pretty lucky. Then with the hard tyres I struggled massively. I tried to push but I lost it at Parabolica and I crashed."

The impact was enough to require Leclerc to visit the medical centre, where he was given the all-clear.

He is hopeful that he will be unaffected for next weekend's race in Mugello.

"I feel quite okay. A bit of pain here and there, but it should be fine. It is normal as the crash was quite big, but I am feeling okay."

Hamilton reveals why he visited F1 stewards during red flag