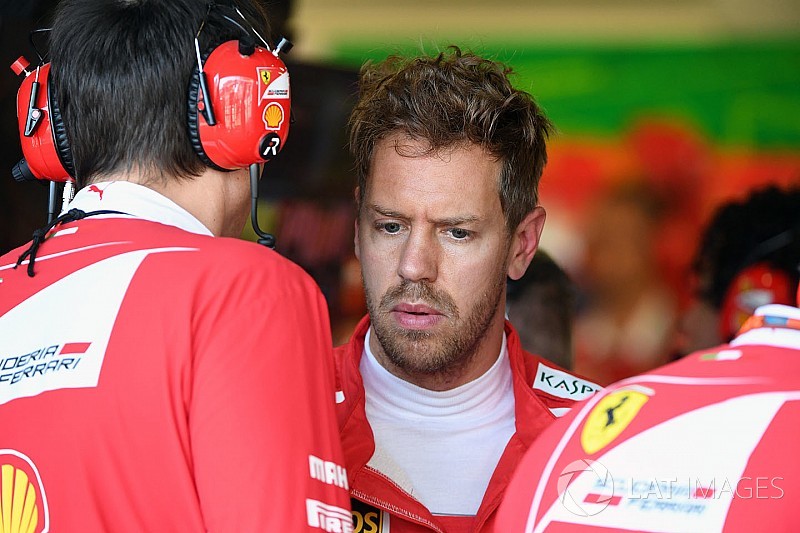 Sebastian Vettel has confessed to feeling that he had let Ferrari down when he lost his temper in Baku and banged wheels with Formula 1 rival Lewis Hamilton.

Vettel was at the centre of huge controversy at the Azerbaijan Grand Prix when, after feeling that Hamilton had brake-tested him behind the safety car, he pulled alongside the Mercedes driver to vent his frustration.

After veering into Hamilton, Vettel was handed a 10-second stop-go penalty, and faced a later investigation from the FIA about his behaviour – although escaped further sanction.

Reflecting on the events of the season in an exclusive interview with Motorsport.com, Vettel said that what happened in Baku felt much worse for him than the crash in Singapore recently, despite the latter proving more costly in the standings.

“I think Baku was worse,” said Vettel. “I felt I let the team down, because something that I did obviously cost a race win potentially.

“So I think in Singapore, to be honest, the way I look at it, it’s racing and it happens. Obviously it is extremely unfortunate, but I don’t know how many start crashes there have been in the past and there will be in the future.

“If you happen to be inside them, it always sucks. There is no better way to describe. Did it come in a good time? No. Is there any ever a good time for this to happen? Probably not.

“So it doesn’t matter. It happened. We cannot control it. We need to focus on what we have in our hands and try to focus on things we can control.”

While Ferrari has been one of the surprises of the season, after emerging as Mercedes’ main challenger, Vettel suggested that progress was not the result of anything changing dramatically at the team last winter.

Instead, he believes the difficult time Ferrari faced in 2016, as it fell short of expectations, helped put in place a new approach from Maranello that has only reaped rewards now.

When asked what was different about Ferrari this year, Vettel said: “Not so much. The people, they are more or less the same.

“2016 was a tough year, but a very important year, because a lot of things we shifted internally to the better. So it should make us stronger.

“Obviously this year gave us the chance with new rules and so on, to come up with a new car, and we used our chance, but you can see we are not entirely happy, because we want to win altogether.

“Sometimes you need maybe to make some small adjustments with the same people, and it works much better.

"So I think the potential is there in Ferrari, the people are there, talent is there. And it’s about us, all of us. trying to work together and make it happen."

Non-listed Ferrari parts would be “huge step" for Sauber