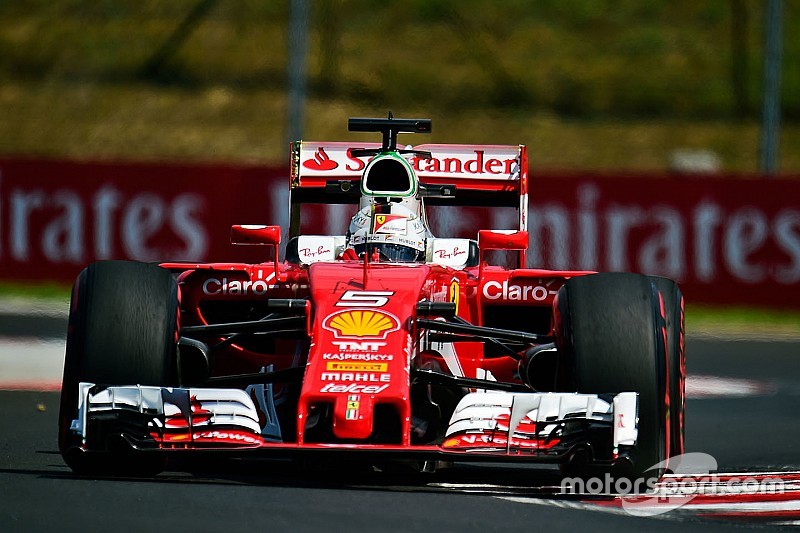 Ferrari driver Sebastian Vettel reckons he could beat Red Bull in the Hungarian Grand Prix, but only if he manages to leapfrog the Austrian team's duo at the start.

The German's hopes of emerging from qualifying as Mercedes' nearest challenger were wrecked by traffic on his final qualifying lap, and it means he lines up in fifth place behind the two Mercedes and the two Red Bulls.

While his position makes it unlikely he can surge into the lead at the start like he did 12 months ago, he reckons there is still potential to have a decent race.

“It is a long race, and the start is very important,” he said. “We hope for a good start and hope others struggle in front of us.

“It is very difficult to overtake here, in terms of race pace, and difficult to fight or challenge Mercedes. But equally, why not?

“It will be hot, and the key will be how much free air we get. Our main rivals Red Bull are right in front of us.

“In the race we can be faster than them, but if we are stuck behind it is very difficult to pass a car if you are only one, two or three tenths of a second faster, not two seconds. Here you need a bit more of an advantage to overtake.”

Vettel says that the promise he has seen from Ferrari over the Hungarian weekend has confirmed that the struggles the team suffered at Silverstone a fortnight ago were a one-off.

“I think Silverstone stood out to be quite poor, I don't think it was normal for us,” he said. “We had some problems, we know and have understood what the problems were and we are working hard on them. Here is less of a problem.

“Generally we are happier. Still [on Friday] and [Saturday] morning we were not entirely happy, and the first session where I felt car was coming alive was qualifying.

“The lap I was going to do was going to be good enough to improve significantly from P5, but in the end we didn't do it because of the circumstances. That is how it goes sometimes.”