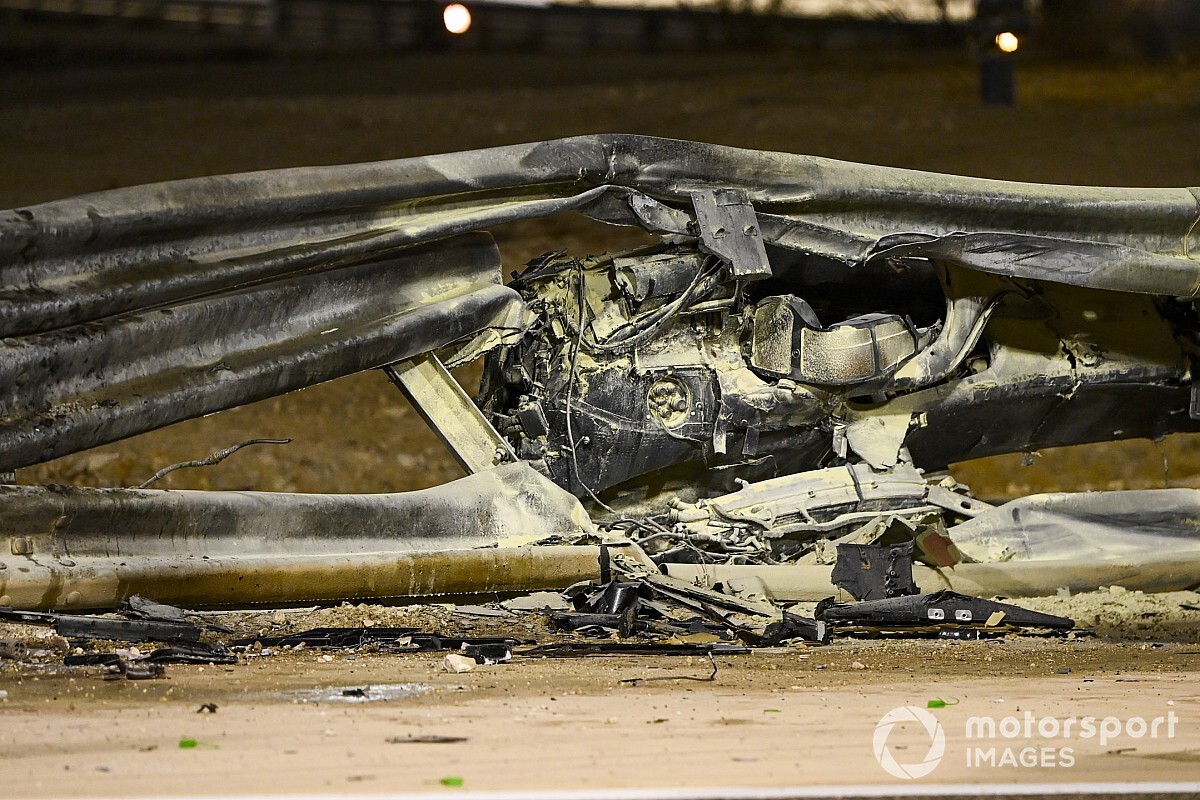 Sebastian Vettel questioned the failure of the guardrail during Romain Grosjean's crash at the start of the Formula 1 Bahrain Grand Prix ahead of a full investigation.

Grosjean crashed on the opening lap of Sunday's race after making contact with Daniil Kvyat at the exit of Turn 3, sending his Haas car into the wall on the right-hand side of the track at high speed.

The crash saw Grosjean's car get torn in half, leaving the monocoque including the halo and survival cell embedded in the metal guardrail while a big fire began.

Grosjean was able to escape from the fire before being met by the FIA medical staff who were quick to attend the scene. Grosjean has since been taken to hospital with a suspected broken rib, as well as burns to his hands and ankles.

Officials from F1 and the FIA have been quick to announce they will complete a full investigation into the accident, but Ferrari driver Vettel questioned why the guardrail failed and was pierced by the car.

"I haven't really looked at the images a lot, because I didn't want to, but the main thing is he got out," Vettel said.

"I don't know how to be honest, but obviously the guardrail is not supposed to fail like that. It's good that the cars are safer as they used to be in the past, but the guard rail shouldn't fail and the car shouldn't catch fire in that fashion.

"There's a lot of precautions that it doesn't catch fire, so I don't know what happened there. It's difficult to say at this stage, but the main thing is that he got out."

The presence of the halo has been widely credited with saving Grosjean's life due to the way it was embedded in the middle of the barrier.

"Had the halo not been there, I'm sure it would have been an incredibly different outcome," said Williams driver George Russell.

"The way he walked away anyway was incredible. The safety has moved along so much in recent years so we can only be grateful."

"It was horrible, initially I didn't know what happened, and when I saw the images I was shocked," added AlphaTauri driver Pierre Gasly.

"From my generation, I've never seen things like this. In the past I think it was more common but it was really scary.

"When I saw Romain got out of the car, I was really happy to see him jumping out. It's just scary, I had no idea a Formula 1 car could break that way, especially going through the barriers."

Charles Leclerc was one of the most vocal drivers on team radio in the aftermath of the accident asking for updates on Grosjean's condition, having seen the accident in his rear-view mirrors.

"I saw it live and I came straightaway on the radio, I was very worried," Leclerc said.

"If you hear my radio messages, obviously I just wanted to have the good news that Romain was OK, and then arriving in Turn 9, I still had no news and I saw also the fire, so I was starting to worry a lot.

"But luckily I think he's fine. I don't know how fine he is, let's say, but the good thing is he jumped out of the car.

"It's incredible. If you see the crash, I struggled to believe once he jumped out of the car, so it's congratulations to the guys that are doing the safety on the cars."