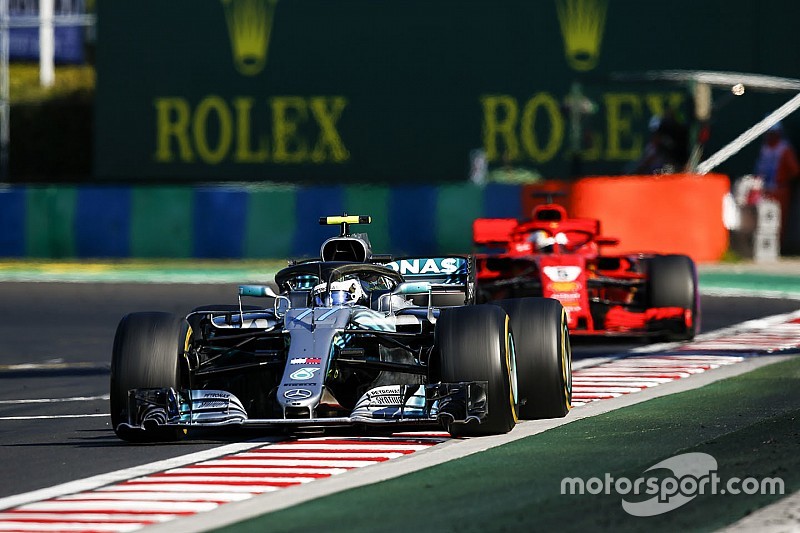 Sebastian Vettel says he does not blame Valtteri Bottas for locking up and hitting his Ferrari Formula 1 car after being passed for second place in the Hungarian Grand Prix.

Vettel had overtaken Bottas exiting the first corner with five laps to go but the Mercedes driver tried to fight back into Turn 2, locked up and hit the rear of the Ferrari.

Bottas broke his front wing in the incident and fell to fifth, hitting Daniel Ricciardo's Red Bull in the process in a later incident, while Vettel was able to continue and finish second.

"I felt, all of a sudden, I got hit from behind," said Vettel, who was fortunate not to be passed by teammate Kimi Raikkonen after the contact as Raikkonen was right behind him on track.

"For him [Bottas] there wasn't anywhere to go, I was ahead.

"I don't blame him – I think he had no grip and when you're so close it's very difficult to stop the car and I think he locked up and we made contact."

Vettel had been hounding Bottas for several laps on fresh ultrasofts, with Bottas trying to make an unlikely one-stop strategy work having pitted early to switch to softs.

"I realised straight away I had a much better run," said Vettel of the pass.

"My rears were in better shape and I got the inside track outside of Turn 1, I had DRS. I was quite comfortable into Turn 2 knowing I got him.

"I wanted to make sure I didn't overshoot the braking, I hit the brakes and when I turned in I felt the contact from behind."

Vettel's second place minimised the damage in the championship, as his main rival and points leader Lewis Hamilton claimed a comfortable victory.

The result leaves Vettel 24 points adrift, but the four-time world champion said the result could have been worse.

"I was lucky I could catch the car [after the contact] and lucky I didn't get a puncture," he said. "The team told me straight away that the tyres look fine.

"I had a feeling the car was fine and it was until the end."