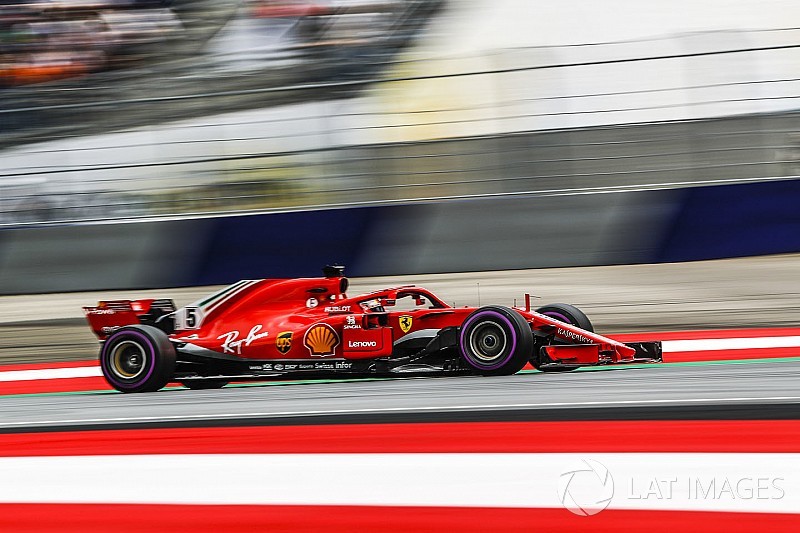 Sebastian Vettel believes Ferrari trailed Formula 1 rival Mercedes in both straightline speed and through fast corners in qualifying for the Austrian Grand Prix.

Valtteri Bottas headed a one-two for Mercedes at the Red Bull Ring, where the Finn and teammate Lewis Hamilton have use of a major aerodynamic upgrade.

The significant car update follows Mercedes' introduction of its 'Spec 2.1' engine in France last week, and Vettel ended up qualifying three tenths off the pace in third.

Asked where Ferrari is losing out to Mercedes, Vettel said: "It's very close, it's not that many corners, but from what we've seen we're losing a bit in sector one and then mostly it's sector three.

"Mercedes is very quick, very competitive, in Turn 7 [the fast left-hand part of the Esses at the start of the final sector.

"They seem to be able to carry more speed up the hill. I think that's one of our main losses.

"It's the high-speed Turn 7 and Turn 9, the second-to-last corner. It's close, we're not talking about much, but enough to get ahead."

Vettel, who is under investigation for impeding Carlos Sainz in qualifying, made an error on his first flying lap in Q3 that made it "not that easy to recover".

He said that meant there was more time to be found but said the Mercedes was still the fastest car in qualifying.

Vettel believes the pendulum could yet swing back in his favour in the coming races, because Mercedes has introduced back-to-back upgrades for its package whereas Ferrari is "largely the same" as in France.

"We have our own schedule in terms of new bits," he said. "We are pushing as hard as we can, we need to make sure what we're bringing to the car is making it faster.

"It's a constant challenge. For now, the last two qualifying sessions Mercedes has the edge a little bit.

"It can turn around. We need to look at ourselves, there's always something you can learn from what other people put on the car but that's not just for Mercedes it's for all the teams."

Hamilton said his own error at the start of Q3 hindered his bid to steal pole from Bottas, who he admitted "did a fantastic job and deserved the pole today".

"When you don't have your first lap as a banker you're kind of building from scratch for the second one," said Hamilton.

"It was quite close between us, which I'm happy about, and it's still a one-two for the team."

Bottas said his strong first lap was a key foundation for his first pole of 2018.

"It helps," he said. "I could build on that on the second run and improve a little bit. The first lap was really good but there was a tiny bit of track improvement for the second run.

"It's always difficult to say how much but the second lap was very similar to the first."

Horner says "nothing to explain" over slipstreaming row