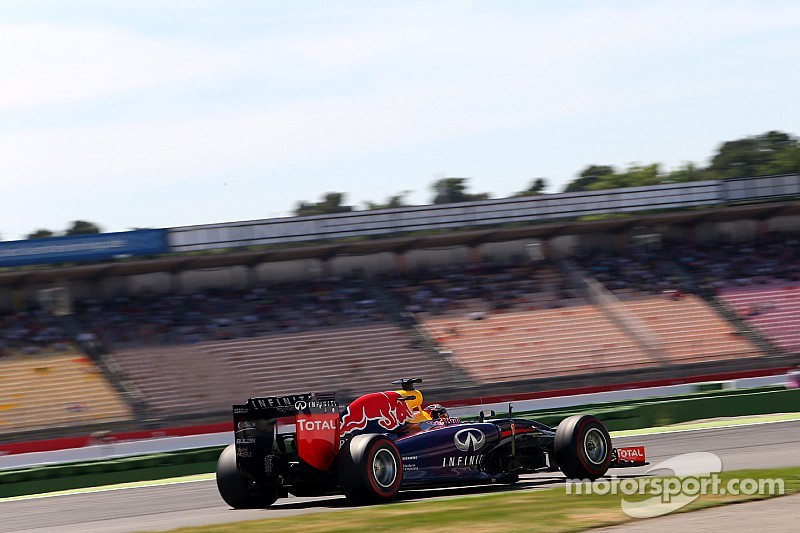 "It certainly didn't really help that Sebastian in his frustration about the new F1 and his car gave loads of interviews" - Katja Heim, the Hockenheim circuit advisor.

Jul.22 (GMM) World champion Sebastian Vettel is copping some of the blame for the small crowd at Hockenheim last weekend.

After buzzing atmospheres and big crowds in Canada, Austria and Silverstone, the empty seats for the German Grand Prix were conspicuous.

"Maybe they are all hung over from the world cup," said Red Bull team boss Christian Horner.

Or maybe the German fans listened to their reigning world champion.

"We talked the sport down at the beginning of the year, and many of us are to blame."

The smaller crowd in 2014 is likely to push Hockenheim - having managed to just break even with 10,000 more spectators two years ago - back into the red.

"It certainly didn't really help that Sebastian in his frustration about the new F1 and his car gave loads of interviews about how bad Formula One is now and that it's not worth going there," said Katja Heim, a circuit advisor.

"As a four times world champion from Germany, people believe him more than they would the sales people," she told Reuters.

But Heim admitted there are many other factors at play, even if she advised Formula One to work hard to be "cooler".

Georg Seiler, the Hockenheim boss, agrees with that.

"When you are missing 10,000 fans, the reasons are not all Formula One," he is quoted by Die Welt newspaper.

Germany's other F1 circuit, the Nurburgring, insists it is not worried.

"So I wouldn't speak about a 'German problem'.

"I think there is nothing wrong with the interest of motor sport fans in Germany and other European countries.

"But maybe we need to think about making the programme on the race weekends more interesting," he added.

It seems that work has already begun. With immediate and noticeable effect, the FIA and race stewards are being much more lenient when it comes to penalising drivers for on-track misdemeanours.

"We want to see real sport again," F1 supremo Bernie Ecclestone is quoted by Auto Motor und Sport, "and not interference with each little incident."

F1 legend Niki Lauda said recently he would like to see every major rule change of the past decade revisited.

Another 'purist', Gerhard Berger, agrees that innovations like DRS and double points are "Nonsense".

"Everything that is artificial is not accepted by the fans," he told Rheinische Post.

"Formula one is overregulated and soft," Berger charged.

He compared a MotoGP rider, who breaks his shoulder but is back on the saddle the next day "with us, where you get a drive through penalty if you drive closer than 10 centimetres to another car".

Nico Hulkenberg and Sergio Perez gets set for Budapest