Vettel apologizes to Webber after late on-track battle at Sepang 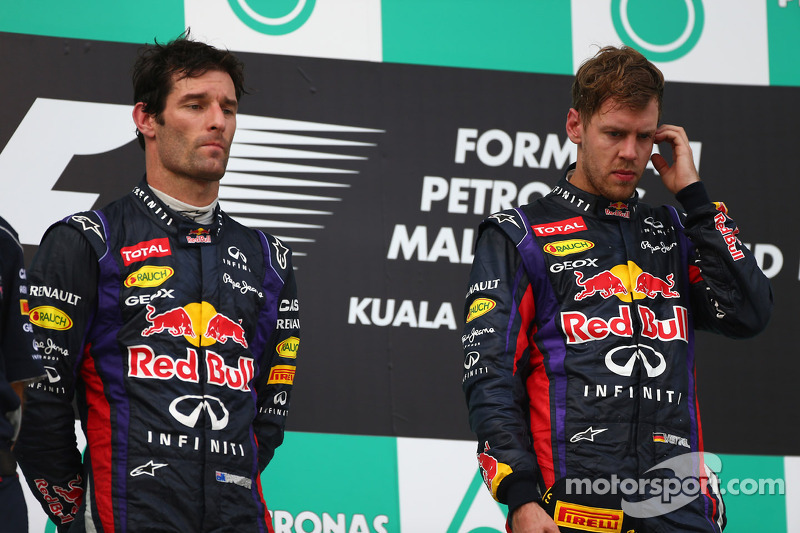 It's tense in the Red Bull Racing camp after Sebastian Vettel ignored team orders to maintain position behind the leading Mark Webber.

Malaysian GP winner Sebastian Vettel has apologized to his Red Bull teammate Mark Webber after ignoring radio messages from the team to turn down the engine and save tires.

I am not proud of this victory

"I am not proud of this victory," said the world champion. "We should have stayed in the positions we were in. I didn't ignore it on purpose but I messed up in that situation. I took quite a lot of risk to pass him and I should have behaved better."

Webber held the lead for the majority of the race and came out of the pits in first place after the last stop. But his young German teammate kept pushing and eventually passed Webber after going wheel to wheel on several occasions.

"After the last stop the team told me the race was over and we turned the engine down to go to the end," said Webber in the tense post-race interview.

"I want to race as well, but in the end the team made a decision which we always say before the start of the race is how it's probably going to be: we look after the tyres and get the cars to the end.

"In the end Seb made his own decisions today and will have protection as usual, and that's the way it goes.

"I turned my engine down and started cruising on the tyres, and then the fight was on.

"I was disappointed with the outcome of today's race."

It remains to be seen what consequences come from Vettel's actions, if any. At the end of the day, Red Bull Racing come home with a 1-2 finish and all the points that come with it.