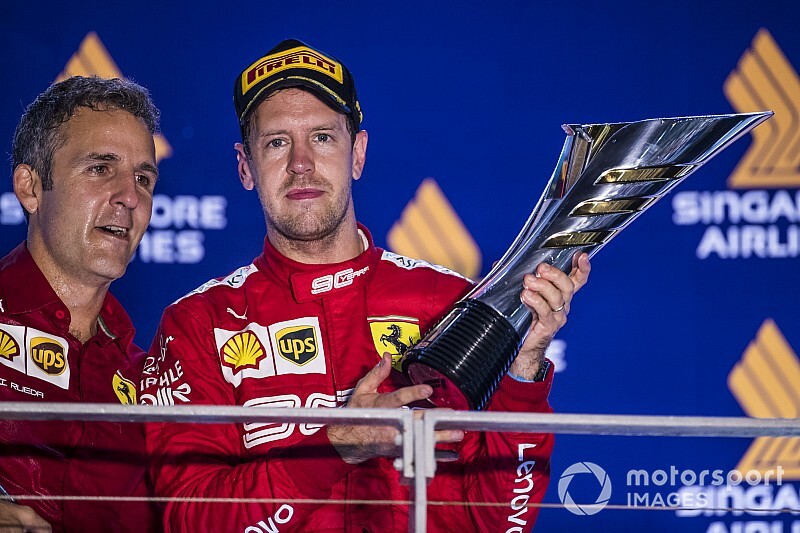 Singapore Grand Prix winner Sebastian Vettel has admitted ending his win drought has brought some relief - but feels it was more of a "confirmation" of his current direction.

Vettel’s first victory of 2019 ended a wait of more than a year for a win, stretching back to the 2018 Belgian Grand Prix.

The four-time world champion has come under scrutiny for multiple high-profile mistakes in that period, including a spin and “dangerous” return to the track at the previous race in Italy.

Asked how it felt to hit back, the Ferrari driver said said: “Maybe less satisfying than you think.

“I don’t think there was anything wrong [with my form]. So it wasn’t like we were lacking speed or anything. Things weren’t maybe falling in place, plus obviously I messed up in the race in Monza, that’s my mistake.

“I’ve been around now for a long, long time and it’s just how the tide turns sometimes.

“I have the highest expectation on myself and I’m not happy when I’m not delivering what I know I can.

“Certainly I had moments this year when I was struggling. So, I know that I can improve from there, I can’t be happy with that. But equally I know that it wasn’t as bad or disastrous as maybe people put it together.

“If you’ve been around for such a long time and you’ve had so many good moments then obviously you get hammered when there are bad moments. That’s just part of the game.”

Vettel said he had been asked “a couple of times” if there was any relief in his victory, which came after back-to-back wins for new Ferrari teammate Charles Leclerc.

“Yes in a way, maybe it kicks in a bit later,” said Vettel. “Maybe just a confirmation that if you keep doing what you do [things will improve].

“[There are] moments where you know that things are wrong and you need to make changes but lately I didn't feel that any big changes are necessary.

“In that regard it’s a confirmation but it’s not like ‘finally, I can breathe again’. It’s not like I felt in a wrong and bad place. I knew that I have to pull through and go through it myself.”

Vettel said he felt he was not “really far away from a breakthrough moment” and was more competitive throughout the Singapore weekend.

But his victory only came after he pitted from third place one lap earlier than Leclerc and the power of the undercut meant Ferrari turned a one-three into a one-two.

Vettel said “you are very misled if you ever think that you are bigger than this team” and insisted the team’s result was greater than individual glory.

“The team is bigger than myself, bigger than any individual, so I am happy for the guys, and obviously we finished one-two,” said Vettel.