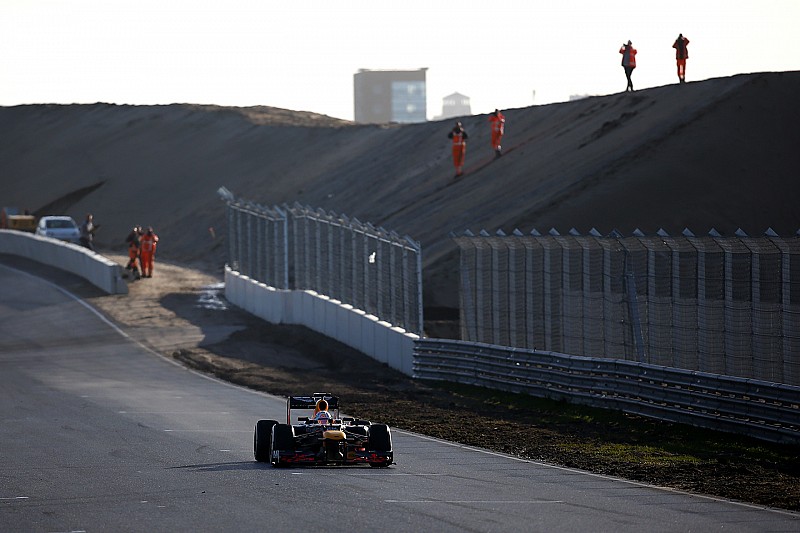 Max Verstappen reckons Formula 1 drivers will have to use different lines through the Zandvoort banking at this year’s Dutch Grand Prix - especially when their tyres start going off.

The Red Bull driver became the first man to lap the revamped circuit in a grand prix car, when he drove a 2012 RB8 around the circuit earlier this week.

And reflecting on his first experience of the two banked corners, Verstappen was clear that they would be a big challenge for everyone.

“I have always found it a super circuit to drive, but the banking definitely adds a new dimension to it,” said Verstappen.

“I think you can drive different lines through those banked corners, so that's a good thing. It has to do with the tyres as well.

“On new tyres you can take a shorter line. But on older tyres, you have to make sure you have a good exit, so you might have to stay a bit higher in that final corner.”

While the final Arie Luyendyk banked corner will be easily flat for the current generation of cars, Verstappen does not think things will be easy through there.

“It's a really interesting corner,” he aid. “Everyone thinks 'oh it's flat-out anyway, so it's quite easy', but you have to take the DRS and all the forces released by the banking into account as well. So all in all I think it's a pretty challenging corner.”

Verstappen is well aware that he will be the centre of attention at May’s event, but he says he is doing all he can to try to play down the extra pressure on him.

“I try not to think of it as a home race too much,” he said. “That's mainly because you shouldn't put any extra pressure on yourself. I just try to be as relaxed as possible.”