Verstappen says Vettel did not apologise for crash 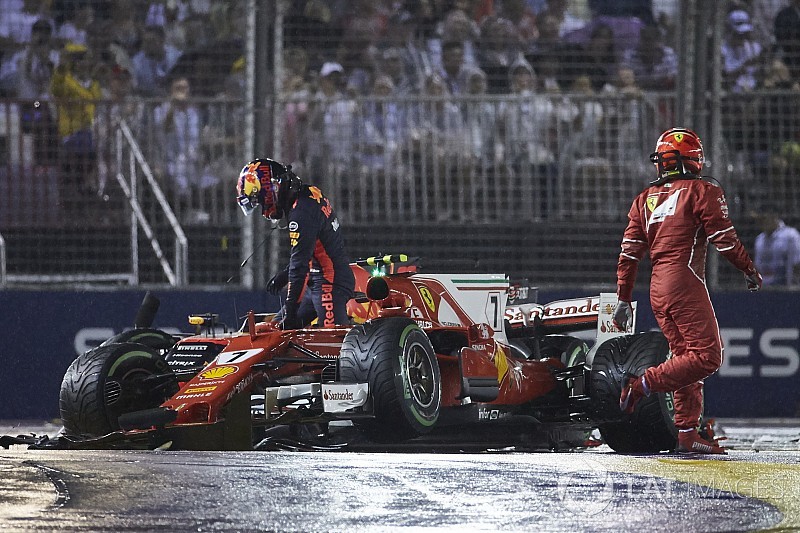 Max Verstappen says Sebastian Vettel did not apologise for the crash that put them and Kimi Raikkonen out of the Singapore Grand Prix.

Verstappen blamed Vettel for causing the accident by moving across to defend position after a slow start from pole, while Vettel said he didn't know how the accident had happened as the Ferraris and Red Bull tried to go three abreast after the start.

F1's stewards took no action after a post-race investigation, and when asked whether Vettel had admitted making a mistake and apologised in the stewards' room, Verstappen replied: "No.

"He did say something like, 'yes, in hindsight things could have been done differently'. But what's done is done."

Verstappen was surprised Vettel defended so aggressively, given he was not racing against main title rival Lewis Hamilton.

"Vettel is fighting for the championship, so you don't need to take so much risk if you know that Hamilton starts fifth," Verstappen added.

"If this would have been with Hamilton then it would have been a completely different story. From his [Vettel's] side, I don't understand that something like this happens."

Ferrari sent out a tweet in the aftermath of the shunt that suggested Verstappen was to blame, but speaking before the stewards reached their verdict, Verstappen's father Jos said his son was blameless in the incident.

Jos Verstappen also suggested Vettel should have been penalised for triggering the collision.

"He does deserve it - I really think he does," Verstappen Sr added. "But they won't be too quick to do that, because he already got a warning.

"If he gets a penalty now then I think they would also need to suspend him for a race, so this might but be another political game and deemed a racing incident. But I don't think that would be fair."

Motorsport Debrief: Honda goes on the offensive after McLaren split