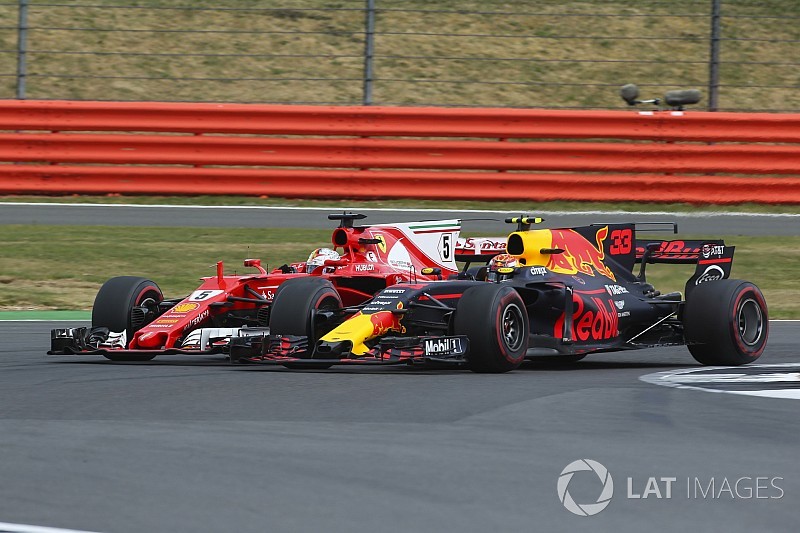 Vettel complained over his team radio during the British Grand Prix that Verstappen was moving under braking as they battled for third place in the opening stages of the Silverstone race.

After the race, the German suggested that his Red Bull rival needed to be better behaved when it came to defensive manoeuvres.

"We know he is a bit jumpy on that," said Vettel. "He is trying to defend as hard as possible, but at some point you need to stick to your line."

But Verstappen has shrugged off Vettel's criticisms, and said that his Ferrari rival's recent behaviour – which saw him peak with nine disciplinary points after swerving into Lewis Hamilton at the Azerbaijan Grand Prix – means he does not feel the German should be listened to.

Asked about Vettel's complaints, Verstappen said: "Yes, but I don't take that seriously. Especially not after all the things he did. If you look at the penalty points that he's got…

"The fight with Sebastian was good. It was hard but fair, I think. That little bit of contact maybe not, but for the rest everything was okay."

Verstappen's hopes of a podium finish were dashed by him needing to make a late pitstop for fresh rubber, after hitting the same tyre troubles that affected Vettel and Kimi Raikkonen.

And although there are suggestions that Verstappen could have been in the top three if he had stayed out at the end, the Dutchman is not so sure.

"The thing is that you would have ended up one or two seconds in front of him [Raikkonen], while he is on new tyres. So you would have never been able to keep that position."

Verstappen is aware that Red Bull's pace at Silverstone was not as good as he was hoping, and is keeping fingers crossed that planned updates for the next race at the Hungaroring deliver more pace.

"We were still too slow, of course, but I think we did the maximum," he said. "I think it was positive. We scored points. And now we need to improve the car."

Asked for his expectations for the next race in Hungary, Verstappen said: "Hard to say. We get a lot of updates, so we need to see how these work. We shall see."

Belgian GP set for sell-out thanks to 'Verstappen effect'