Max Verstappen is struggling to understand why he got penalised for running Lewis Hamilton off the track in the Saudi Arabian Grand Prix after not being sanctioned for a similar incident in Brazil.

At last month's Brazilian GP Verstappen ran Hamilton wide in Turn 4 as the British driver tried to overtake around the outside, but the incident wasn't investigated as FIA race director Michael Masi decided not to refer the matter to the stewards.

The non-call precedent caused a lot of angst in the paddock, both inside and outside the Mercedes team, because drivers were left confused about what the regulations about forcing each other off really meant, and how they would be policed going forward.

A drivers meeting before the subsequent Qatar GP failed to produce a conclusive answer.

The first time the issue was settled with Masi without getting the stewards involved, Red Bull agreeing to drop Verstappen to third behind Hamilton for the restart after a red flag.

On the second occasion the Dutchman was handed a five-second penalty for gaining an advantage outside the track, after his first attempt to let Hamilton by led to a collision, and he then immediately repassed Hamilton on the second attempt which also didn't satisfy the stewards.

Verstappen likened the Jeddah incident to his unpunished move in Brazil because both drivers left the track, and thought it was odd that "in Brazil it was fine and now suddenly I get a penalty for it." 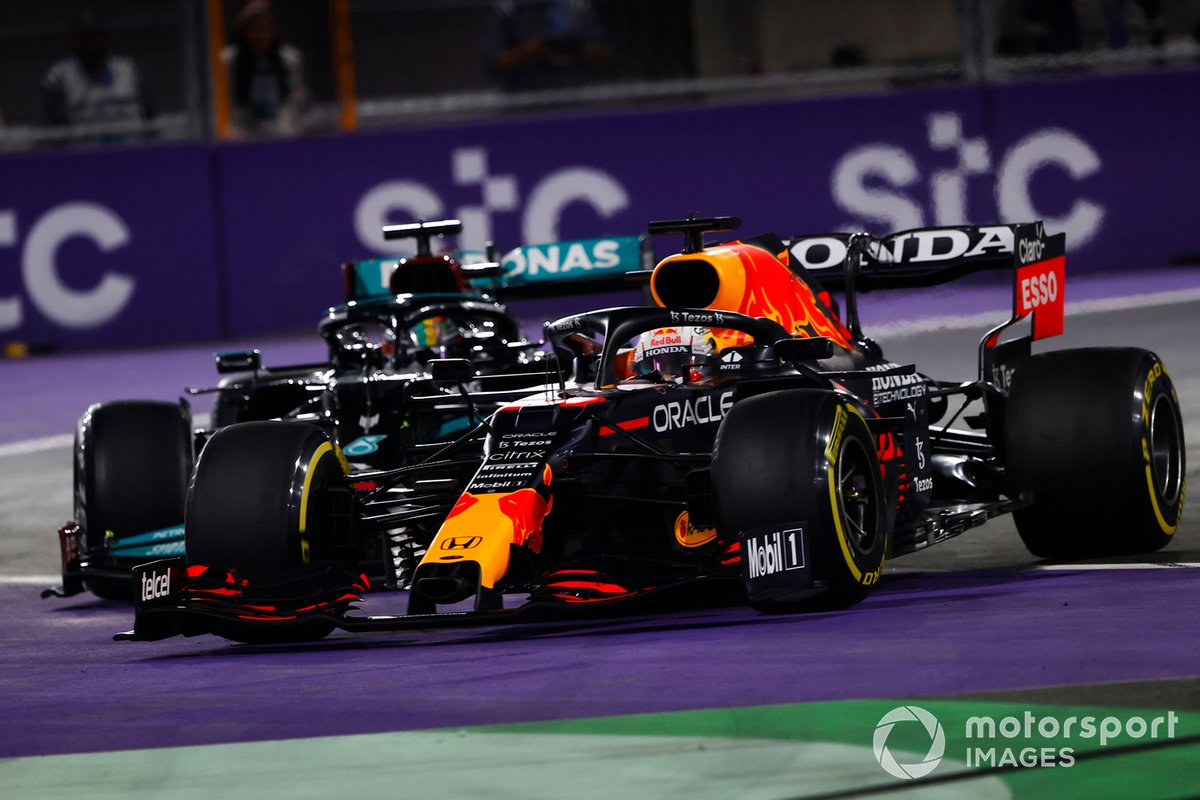 "Of course, he had the run, a bit like Brazil, and of course I braked late, and I think I got a little bit offline at one point," Verstappen said.

"I had a moment, so I went wide, but he also didn’t make the corner so we both basically missed the corner, and I don’t think it’s fair to then just say that I get a penalty but, yeah, it is what it is.

"I find it interesting that I am the one who gets the penalty when both of us ran outside of the white lines. In Brazil it was fine and now suddenly I get a penalty for it."

Verstappen, who received an additional 10-second penalty for his role in the Turn 27 collision with Hamilton, said he didn't want to dwell too much about the events in Saudi Arabia, but reiterated that it was "a shame" that talk about penalties overshadowed the race once again, just as the two title protagonists are heading to the Abu Dhabi season finale on equal points.

"You could clearly see both didn’t make the corner, but it’s fine. I also don’t really spend too much time on it. We have to move forward," he added.

"We’re equal on points now and I think that’s really exciting, of course, for the whole championship and Formula 1 in general.

"But I said it earlier on my in-lap, I think lately we’re talking more about white lines and penalties than actually proper Formula 1 racing and that’s, I think, a little bit of a shame."