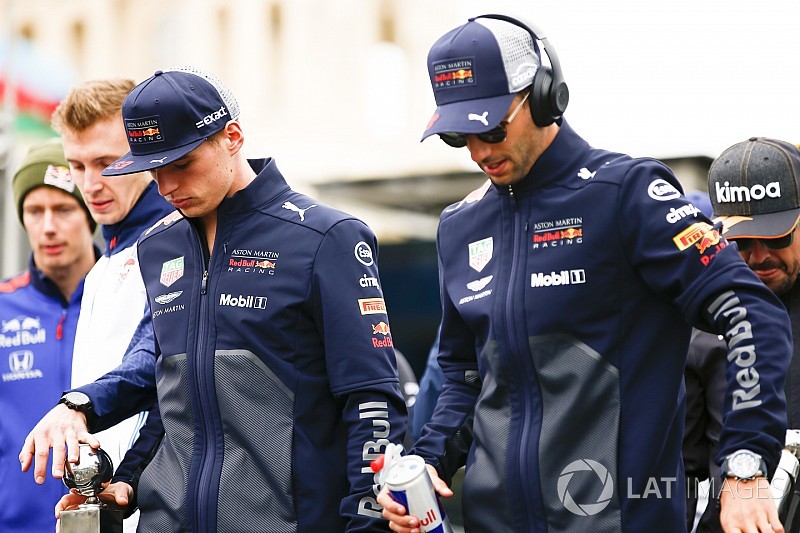 Max Verstappen and Daniel Ricciardo have been ordered to Red Bull's factory so they can make a personal apology to staff over their collision in the Azerbaijan Grand Prix.

The two drivers crashed out of the race after a coming together at Turn 1 as they fought for position in the closing stages of the race.

The collision – which came after some fraught side-by-side moments throughout the Baku race – left Red Bull chiefs furious.

Team principal Christian Horner said that both drivers were in the 'dog house' - and that they had been asked to travel to the team's Milton Keynes base prior to the next race in Spain to speak to team members.

"In Barcelona they will be fine, I have no doubt about that," Horner told Sky Sports. "But they are both in the dog house. You can see that in their body language.

"They will be in the factory to apologise to all the staff prior to the Barcelona race."

Horner spoke with Verstappen and Ricciardo at the Baku track after their clash, and rammed home the message that the pair had been selfish in robbing the team of a good result.

"Things get discussed behind closed doors, but the drivers at the end of the day drive for a team and they both recognise that they have screwed up today," he said.

"They will be apologising to the team, and all members of the team, because it is a team sport and that seemed to get forgotten about."

Despite some close action earlier in the race – which included the pair brushing wheels – Horner said there had been no intention to step in and impose team orders prior to their costly retirement.

"There were probably three incidents between the two of them over the course of the grand prix," he added.

"They touched wheels earlier in the race, they have been told to calm it down a bit...their engineers are managing and working with the drivers.

"But we don't want to interfere in letting them go wheel-to-wheel. They have been very good at that up to this point. And what we have always said – give each other room on track and we will let them race.

"They have just about done that through the grand prix until that unfortunate incident. I am not apportioning blame one way or the other, to either of the drivers – they are both to blame in this and it is the team that unfortunately misses out."

"They have been reminded that they are part of a team and they have a responsibility in the role that they perform that they are both highly paid individuals to act with the team's interest at heart, not just their own. The message was delivered very clearly."

Vettel says he "had to try" move on Bottas