Max Verstappen reckons Red Bull still has “a good shot” at winning Formula 1’s 2021 Jeddah race despite his Q3 crash, after recovering from its heavy Qatar defeat to Mercedes.

Verstappen was on course to beat Lewis Hamilton to pole position for Saudi Arabia’s first F1 race but locked up at the final corner on his last Q3 lap and hit the wall on the exit.

That left him third at the end of Q3, as Valtteri Bottas had just bettered Verstappen’s existing personal best before the late incident occurred.

But the Dutchman says that despite his costly error, Red Bull’s qualifying speed against its title rival “gives me hope because [in] Qatar we were 0.45s off [in qualifying] and knew the race was going to be really tough” – as Hamilton dominated F1’s most recent event to win from pole.

Speaking about his RB16B’s performance in Jeddah in the post-qualifying press conference, Verstappen said: “Well, it at least seems like we can fight.

“In Qatar we were really off the pace, so it seems like our car is working a bit better here and I hope that tomorrow on this track we can follow well and then I’m sure if that’s the case then we have a good shot at it.” 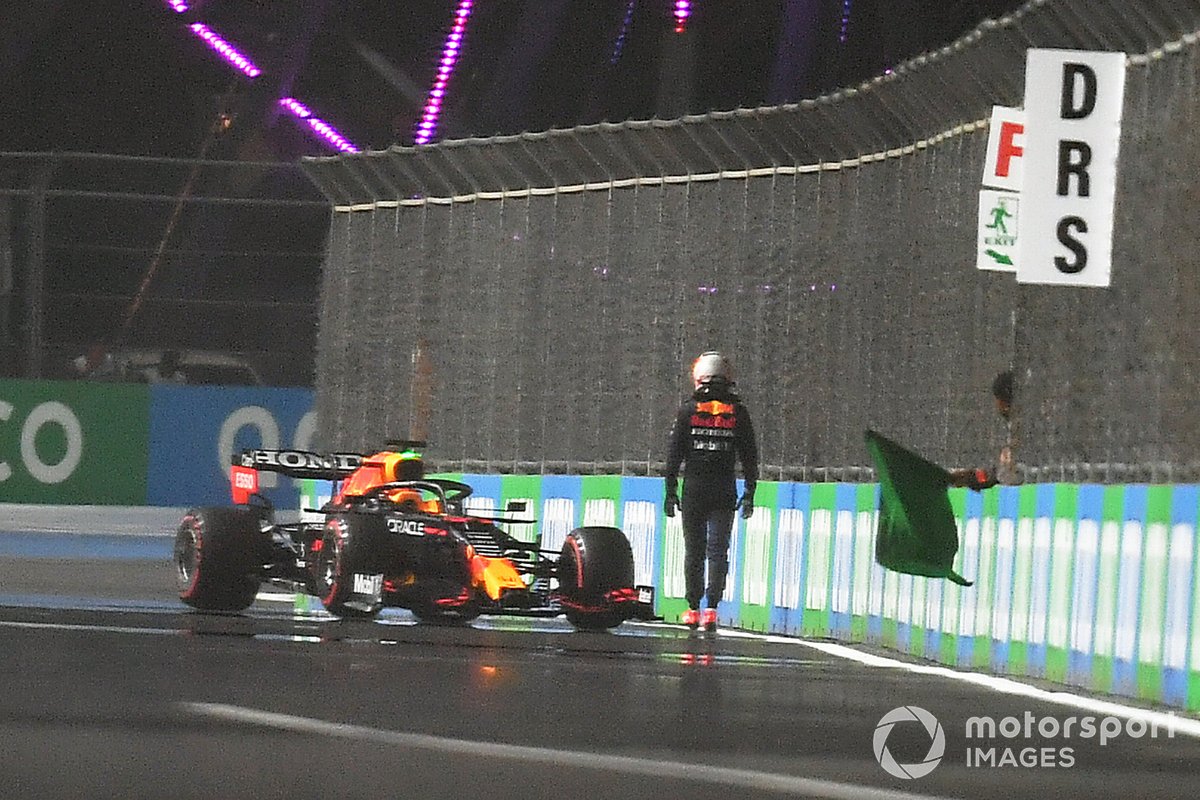 Max Verstappen, Red Bull Racing RB16B, climbs out of his car after crashing out on the final lap of Q3

On the overtaking potential around the walled Jeddah track, Verstappen said that so far in the weekend he has not “really followed a car around here so it’s a bit difficult to say”.

But he will have to pass at least the two Mercedes cars if he wants to score a first win since his Mexico triumph.

On overtaking in Sunday’s race, Verstappen added: “I hope it’s going to be alright. [But] it’s not only that – we don’t really know the tyres, how they’re going to be behave.

“I’m confident. Of course, I would’ve liked to start first, but now starting third [winning] is a bit more difficult, but definitely not impossible.”

When asked to describe what had caused his crash, before which he was 0.244s up on the first two sectors of Hamilton’s pole time, Verstappen said: “I arrived there and from my feeling was braking at the same point – but I had a little lock-up and I still tried to finish the lap.

“But I clipped the wall on the exit so I couldn’t continue. It’s extremely disappointing, of course.

“I thought we had a good car in qualifying and everything seemed to be coming together – it was just hard to nail the lap in Q1 and Q2 with the traffic and stuff.

“In Q3 it was good, but unfortunately I couldn’t finish the lap so it’s of course extremely disappointing.”