Max Verstappen felt his Red Bull Formula 1 car "was really on rails" after a crushing win in the Belgian Grand Prix.

Verstappen was forced to start from 14th on the grid - which effectively became 13th as Pierre Gasly retreated to the garage before the start - as one of several drivers taking an engine change penalty. On soft tyres, he quickly scythed through the field in his dominant Red Bull RB16.

Following an early safety car, the Dutchman came through in seventh after just five laps and then steadily moved up to second, passing second-starting teammate Sergio Perez.

That became first after leader and polesitter Carlos Sainz pitted and, after Verstappen had made his first pitstop on lap 16, he comfortably passed Sainz for the net lead on lap 18.

Verstappen then regaled the tens of thousands of Dutch fans that flocked to Spa-Francorchamps with a crushing display, taking his ninth win of the season with a 17-second gap to Perez in second.

Afterwards Verstappen said his car was "on rails" on what he hailed an incredible weekend.

"It was quite a hectic first lap to try and stay out of trouble, so many things are happening in front of me," he said.

"But once we settled in after the safety car, the car was really on rails. I picked the right places to pass people and we could look after our tyres and that's how we made our way forward.

"After that once we were in the lead, it was all about managing everything. But this whole weekend has been incredible." 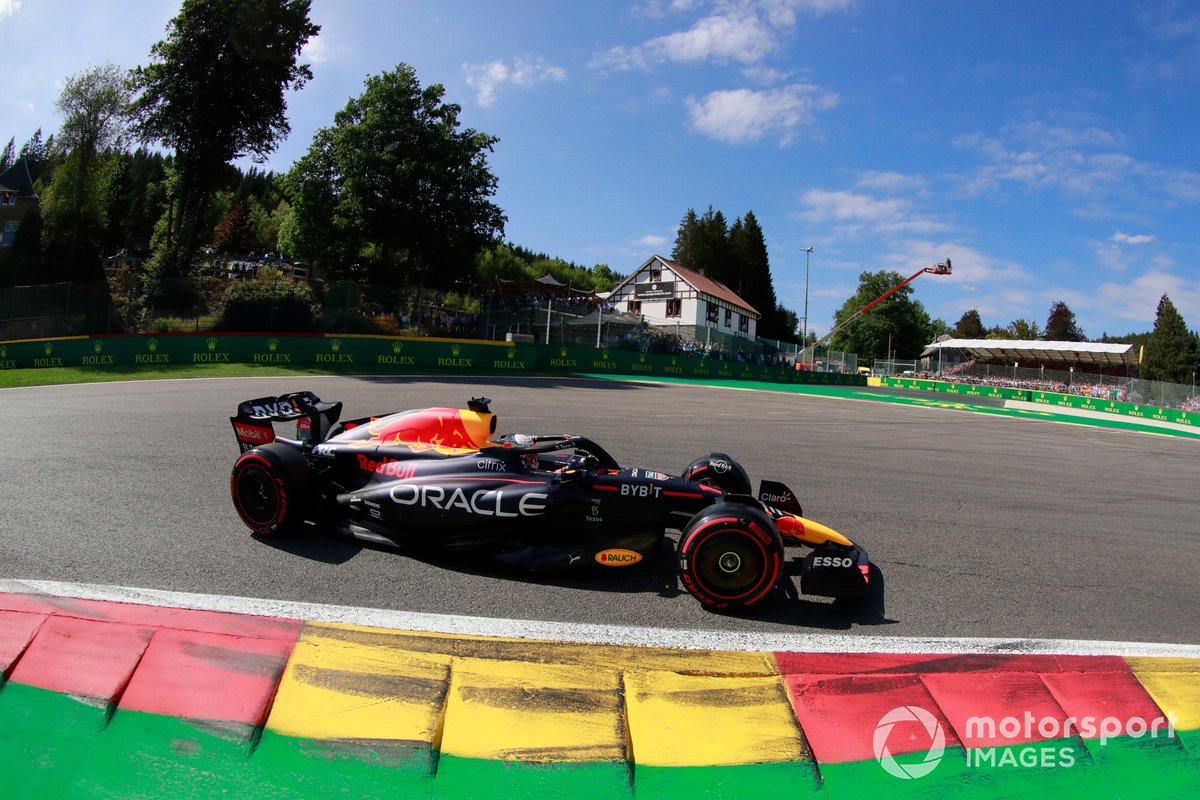 After winning a farcical 2021 edition which was called after two rain-soaked laps behind the safety car, Verstappen's first bona fide Spa win in the country of his birth was the result of a weekend so utterly dominant that he "couldn't have imagined" it.

"Of course, it's been a weekend I couldn't imagine before. But I think we want more of them, so we keep on working hard," he added.

Perez, who was passed by Verstappen in the first stint despite starting 11 places ahead of his teammate, had to concede the reigning world champion was "on another planet" on Sunday.

"I really hoped for more today. It was a good opportunity, but Max was just flying. He was on another planet and was untouchable," Perez admitted.

"Especially the first stint was quite poor in terms of degradation. But still, it's a very strong result for the team. I think we managed to get a lot of points today, which is important."

Verstappen's nominal championship rival Charles Leclerc, who started one place behind him, only managed sixth after another challenging race for Ferrari.

That means Verstappen will now head to his official home race in Zandvoort with a mammoth 93-point lead on Perez, with Leclerc slipping to third -  a further five points behind.