Verstappen: No falling out with Ricciardo over Baku crash 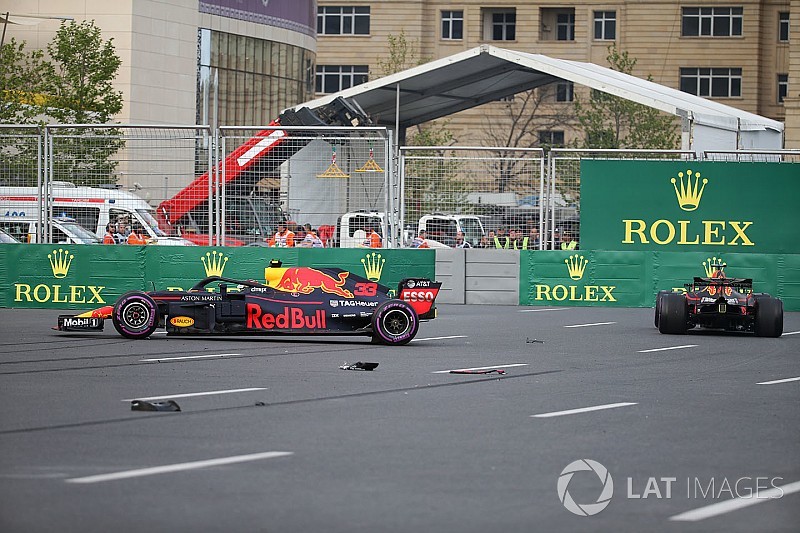 Max Verstappen insists that his relationship with Daniel Ricciardo has not been damaged by their collision in the Azerbaijan Grand Prix.

The duo crashed out of the race in Baku after Ricciardo slid into the back of Verstappen at Turn 1 as they battled for position late in the race.

Red Bull chiefs said both drivers were equally to blame for what had happened, and made clear that the duo would apologise to factory staff in Milton Keynes prior to the next race in Spain.

Speaking on Red Bull’s Servus TV channel, Verstappen said that he and Ricciardo had spoken to each other about what happened – and that there was no hint of a falling out.

“Obviously we talked about it,” said Verstappen. “Daniel and I are completely okay with each other. We can both see that what happened isn't good for the team. We'd already had some tough battles, but everything was fine.

“It was hard but fair. Now we'll obviously need to go to the team in Milton Keynes and apologise.

"But then we need to stay positive, because I think we have a really good chance coming in Barcelona. We've got a lot of updates on the car, it all looks really good.”

Pushed on whether comparisons could be made between his relationship with Ricciardo and the difficult situation Mercedes experienced with Lewis Hamilton and Nico Rosberg, Verstappen said: “No, no. We spoke to each other a lot after the crash. We were both so disappointed. I don't believe it will change our relationship.”

Verstappen says both he and Ricciardo have understood that what they did in Azerbaijan was unacceptable, but that it was important the focus switched to the future rather than dwelling on the events of last weekend.

“It's obviously really bad for the entire team how many points we lost. There's no place for a crash with your teammate,” he said.

Although Red Bull chiefs have said they do not want to impose team orders between the pair, Verstappen admits he has fears action could be taken.

Asked if he worried about the possibility of a scenario like Force India had last year, Verstappen said: “Yes, but I don't think it's gone that far. That's good, but we need to think about the team as a whole – and at the end of [Sunday] we didn't do that.”

Both drivers posted video on Twitter on Tuesday, explaining how they were eager to look forward at what is possible.

Ricciardo’s video was taken from inside Red Bull’s simulator at the Milton Keynes factory, and he urged everyone to keep their chins up – saying that Baku would be forgotten if the team won the next races in Spain and Monaco. The video is no longer available.