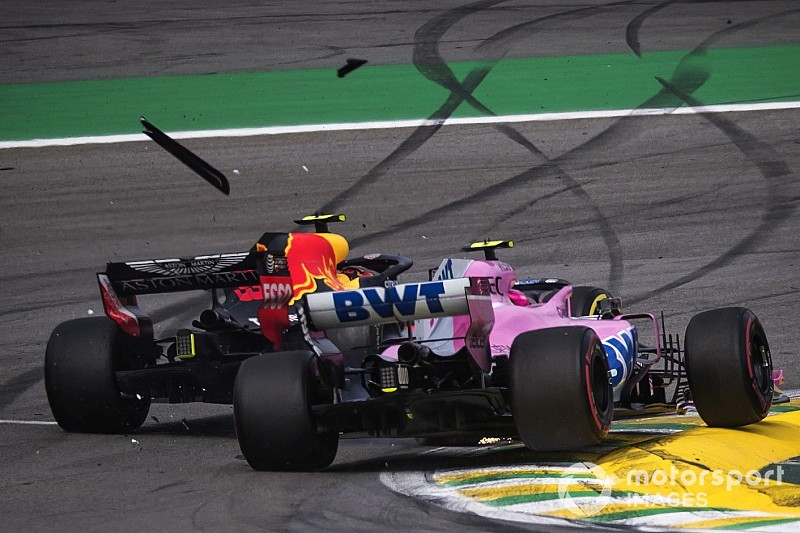 Former world champion Damon Hill says Max Verstappen reminds him of Ayrton Senna and reckons the Dutchman, like the Brazilian, will learn from his mistakes as a young F1 driver.

Red Bull driver Verstappen lost what looked like a certain victory in the Brazilian Grand Prix after crashing with Esteban Ocon while leading.

While Hill believes that Ocon was primarily at fault in the controversial collision with Verstappen, he says that a more experienced driver would have left enough margin than the Red Bull driver did, and not become involved in contact.

"There was another chap in F1 that used to occasionally bump into people when he needn't have done," Hill told Motorsport.com.

"I'm actually thinking of Senna. It's like there's a pattern that evolves when they are very young, and they don't understand.

"Clearly Ocon should not have got himself in a tangle situation with the race leader.

"But Max diced with him, instead of going, ‘What is this guy playing at? He's going to be difficult,' and waiting for a slightly less risky opportunity.

"I don't want to be critical of Max. It won't make a difference anyway, because he will continue to take risks and drives the way he drives, but he will learn, and eventually he will drive like Lewis has learned to drive now.

Hill acknowledged that Ocon had the right to unlap himself.

"That's a very interesting argument, and he's under pressure for time too," he said.

"But you have to take extreme care when you're involved in the battle for the lead, maybe even to the point of getting on the radio and asking, 'Can you explain to Red Bull that I'm trying to unlap himself.'

"But he'd only overtake him for a few laps, he'd pass him and then be re-passed a few laps later."

Former F1 driver Felipe Massa, who was working as a pundit for Brazilian TV at Interlagos, agreed that Verstappen could have left more room.

"For sure it was a bit strange to see Ocon trying to pass Verstappen at that moment of the race," he told Motorsport.com.

"And then I understood that Ocon had a new tyres. The rules say that if you are quicker you can overtake, but you need to take care, which is not what happened in the end.

"But also, and I'm not putting the fault on Max, maybe he could have taken a little bit more care than he did. Ocon risked too much, but maybe Max could have avoided it as well."

Regarding the subsequent confrontation in the FIA garage, Massa added: "You know Max, and when blood is getting a little bit hot, it can happen."