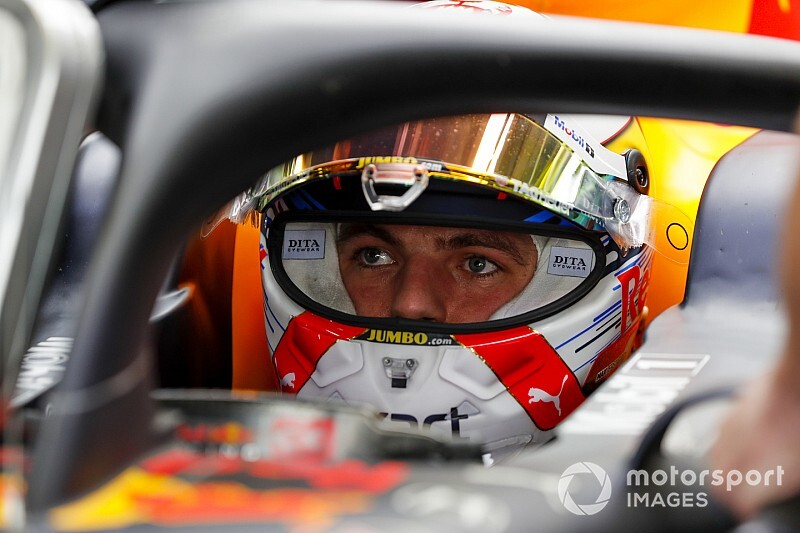 Verstappen was stripped of his pole at the Autodromo Hermanos Rodriguez after receiving a three-place grid penalty for failing to slow sufficiently in response to a yellow flag thrown out for a crash for Valtteri Bottas at the final corner.

Two other drivers besides Verstappen passed the site of Bottas' crash on late flying laps in Q3, and while Ferrari's Sebastian Vettel lifted off the throttle, Hamilton - who ran immediately behind his teammate - did not appear to lift, albeit did not improve in that sector, unlike Verstappen.

Speaking after the Mexican Grand Prix a day on, Verstappen accepted the penalty but questioned why Hamilton - who joined him on the second row and would go on to win the race - didn't receive the same treatment.

"The rule is very clear. The only thing I want to say about it from my side is, because there were a lot of comments about it, and looking back, for sure I should've lifted - but then everybody should do the same.

"And I know Seb did the same, but one silver [Mercedes] car didn't. And then he doesn't get a penalty, and that annoys me as well. But it is what it is. I can't decide for other drivers about the rules."

Hamilton had called on the FIA to be "very strict" in regards to Verstappen's infraction - although the reigning champion was under the impression the Red Bull driver had ignored double-waved yellow flags, which would've been a more severe wrongdoing.

While Bottas had crashed right ahead of Hamilton, the yellow flags were seemingly not being flown yet by the time the Briton had arrived at the scene.

"Valtteri was just ahead of me and I saw bits on the ground, there was no flag at the time," Hamilton has said after qualifying.

"I was quite hesitant because obviously something had happened ahead. I hesitated getting back on power. By the time I’d realised there was a crash I was basically past it."

Despite the penalty, Verstappen believed a victory challenge was "still on" from fourth on the grid, but his race unravelled during early battles with Hamilton and Bottas - the former costing him track position and the latter yielding a right-rear puncture.

"The start itself was good and then he [Hamilton] came back around the outside, he braked very deep into Turn 2, I had to go off the track - but okay, that can happen.

"Afterwards with Valtteri I went up the inside and when I was alongside him, I guess he didn't see me, he was already turning in and then he clipped me on my right rear.

"I had to do a whole lap with a puncture. From there I had to do a one-stop, of course it was a very bad one-stop but it was our only option to come back to P6. The pace was good, the car was good - it's a shame to not finish higher up."