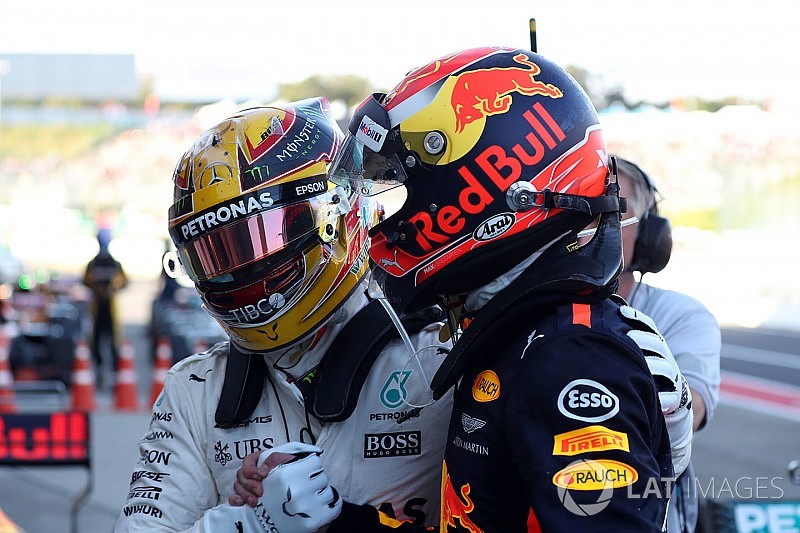 Max Verstappen believes he wouldn't have beaten Lewis Hamilton to victory in the Japanese Grand Prix even without losing time in the traffic late on.

The Dutchman was all over Hamilton on the penultimate lap of the Suzuka, as the race leader got bogged down behind the lapped McLaren of Fernando Alonso.

However, this proved a false dawn for Verstappen's victory hopes as he dropped time clearing Alonso himself, allowing Hamilton to establish a gap once more.

Verstappen was then held up by the lapped Williams of Felipe Massa - who Hamilton had gotten by with relative ease on the main straight – to end up 1.2s adrift at the chequered flag.

"I could see Lewis managing his tyres and, with traffic, it seemed difficult for him to follow other cars compared to me," Verstappen recalled.

"When you close up, you lose a lot of downforce. I couldn't really attack him, but I tried."

Asked whether losing time behind Alonso cost him the win, he said: "It didn't help, but it was more last lap with Massa.

"But I don't think I could get past Lewis, I could close up. It was not ideal but it wouldn't have made a difference."

Verstappen, who overtook teammate Daniel Ricciardo at the start and quickly moved past the hobbled Ferrari of Sebastian Vettel, couldn't match Hamilton's pace in the initial run on supersofts.

But, owing to a "better balance" on softs and despite a blistered tyre, he could stay in touch with Hamilton in the second stint, which enabled his late-race challenge.

"Once I got past Seb I could do my own thing. First stint was alright, Lewis was a bit faster and then on soft tyres we had a better balance.

"I didn't want to close up [to Hamilton] too much in case [that] destroyed my front tyres and I needed them at the end."

Alonso "tried not to bother anyone"

Meanwhile, Alonso, who was summoned to the stewards after the race over "ignoring blue flags", said he did his best not to interfere in the victory battle.

However, he also noted that he would accept whatever ruling the stewards reached, the Spaniard having finished outside of the points in 11th.

"They can do whatever they want. I don't have points anyway," Alonso said.

"But whatever they say, we'll accept it."