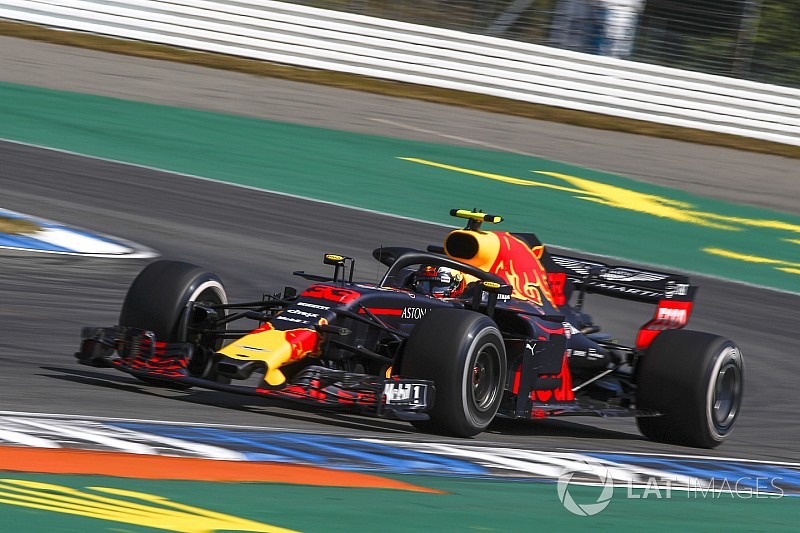 Max Verstappen says he took Hockenheim’s Turn 1 flat on his final run in qualifying in Saturday – and therefore became the first Formula 1 driver ever to do so.

The Dutchman, who qualified fourth for Sunday's German Grand Prix, said he also tried to take Turn 11, the right-hander into the stadium section flat, but in the end he had to make a tiny lift.

When returning to the pits he told the team: “I gave it everything I had.”

Verstappen’s feat shows just how much downforce is generated by the current F1 cars, and especially the Red Bull RB14.

“Into the stadium, I think [Romain] Grosjean aborted his lap,” he explained. “So I wanted to take that corner flat, but I guess just having a bit of turbulence didn’t help.

"But for example Sector 1 was really competitive. Turn 1 was flat for example, so that was good.”

He confirmed that he had only attempted the feat when it really mattered, and he could in effect afford a mistake.

Asked it had given him a buzz, he added: “That was nice, yes! I don’t think anyone has taken it flat.”

He denied that he had sounded downbeat on the radio at being only fourth: “No, I wasn’t depressed, I was happy with my lap.

"But we know that in qualifying we don’t have a chance, so I just gave it all I had, to at least be fourth.”

Verstappen said he was not surprised by the pace of the cars ahead, given the usual benefits the Mercedes and Ferrari-powered cars derive from their qualifying modes.

“It is just the engine mode, very clear," he said. "Well, Ferrari, you can see it’s very logical, because Ferrari is quick, Haas is quick, Sauber is quick, and it’s always on power tracks. It just means they have a really strong engine."

He added: “We should be closer [in the race], they cannot use the power mode they have all the time, so that would bring us a little bit closer.

Verstappen also revealed wanted to qualify in Q2, and thus start the race, on the soft tyre.

But a red flag spoiled the plan, and he had to join everyone else on ultrasofts in order to guarantee that he could get through to Q3.

“I tried to qualify on the soft, but then with the red flag I aborted, and then I didn’t want to take the risk of maybe losing out," he said. "So then I also qualified on the ultra.

"But yeah, it was quite good that everybody else thought ultrasoft. At least it’s better for the start to be on the same tyre.”

Sainz wants next F1 contract to be two-year deal