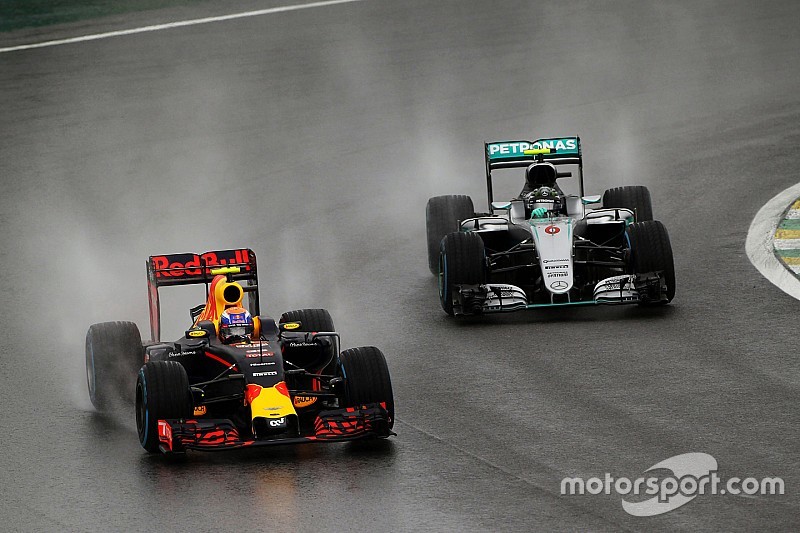 Max Verstappen’s stunning charge through the field in the Brazilian Grand Prix has been likened to some of the greatest ever wet-weather Formula 1 drives from Ayrton Senna and Michael Schumacher.

The Red Bull driver was forced to recover from a late pitstop to change to extreme wet tyres after weather conditions proved unsuitable for the intermediates he was running.

Having been left down in 14th spot, he pulled off a number of sensational overtaking moves to get up to third place in just 12 laps.

Add to that an earlier brilliant overtake on Nico Rosberg, and a spectacular save from a high-speed spin approaching the pitlane entry, and his boss Christian Horner was in no doubt that F1 had witnessed something special.

"Well they don't get much better than that," said Horner. "I think what we witnessed today was something very special."

When asked if Verstappen's drive was an iconic as Senna's at Monaco in 1984 or Schumacher's in Spain 1996, Horner said: "I think it's right up there. You have to compare it to those great moments.

"You don't often witness a motor race like that and I think what we saw today was something very, very special."

As well as his speed out on track in the wet, Verstappen also earned great praise for his intelligence in using the numerous safety car periods to better understand where the track was grippier at each corner.

He experimented with different lines many times to work out exactly where he could place his car for better speed.

That resulted in him being able to utilise the grip for some slingshot moves – including right around the outside of Rosberg at Turn 3.

"He was just exploring," said Horner. "Even behind the safety car you could see him having a look at different parts of the tarmac, just looking for grip.

"I didn't see anybody [else do it] to the extent that Max was. They've all come the same route through karting, but Max was in a league of his own today."

After Verstappen came so close to spinning into the barriers near the pitlane entry, Horner admitted that things had got pretty nervous on the pit wall.

"I think that almost necessitated an underwear change for most of the pit wall," he said. "But again he was extremely calm the way he came on the radio. He seemed in control apart from that moment, all afternoon."

Why the Brazilian Grand Prix was stopped again