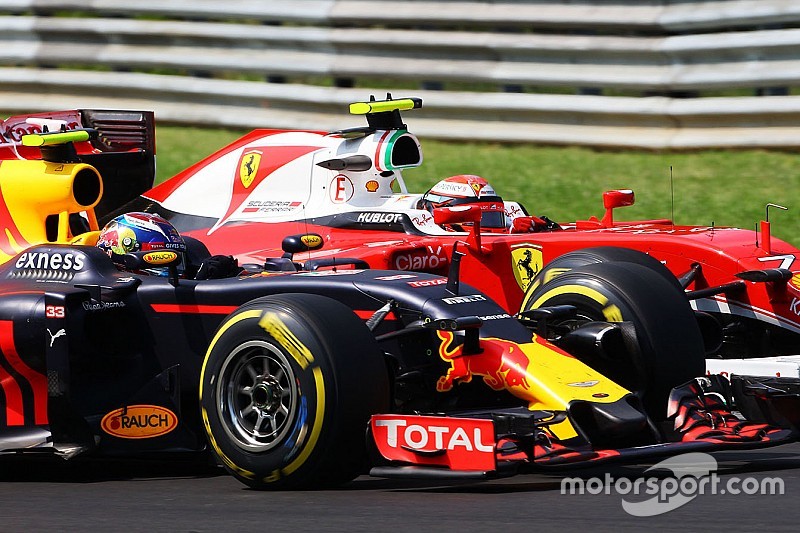 Max Verstappen insists he is not going to change his aggressive approach to racing, despite complaints from rivals about how he defended against Kimi Raikkonen in Hungary.

The Dutchman's driving – and especially the way he moved under braking at Turn 1 during that Hungaroring battle - came up for discussion in Friday night's drivers' briefing at the German Grand Prix.

But although some of Verstappen's rivals were quite outspoken about the matter, the difficulty of stamping out such moves is that there is no set regulation that covers how drivers must behave in a braking zone.

Verstappen himself thinks that introducing such a rule would be lunacy anyway, because an essential part of racing is allowing drivers to defend.

"You better stick the rulebook on the steering wheel. 'Oh wait a second, I turn the page... Ah yeah, it says you can pass.' It's not like that."

Although Verstappen is aware his rivals are unhappy, he says that all that matters to him is that he follows the rules.

"I think it was all pretty clear. I didn't get any penalty. I didn't even get called to the stewards, so there is no reason for me to change anything," he said about Hungary.

"Of course I was on the edge. It was all within the rules. I did exactly what was allowed. There is not much need to change.

"I can understand other drivers. They don't like it, but I'm here to race, I'm here to defend my position. If they were in the same situation they would do exactly the same.

"It is of course frustrating in you are behind. After the first stint I couldn't get past Kimi and I'm also not happy in the car, but I don't start screaming or doing strange things or whatever. And you don't force anything to try to get past because it was impossible."