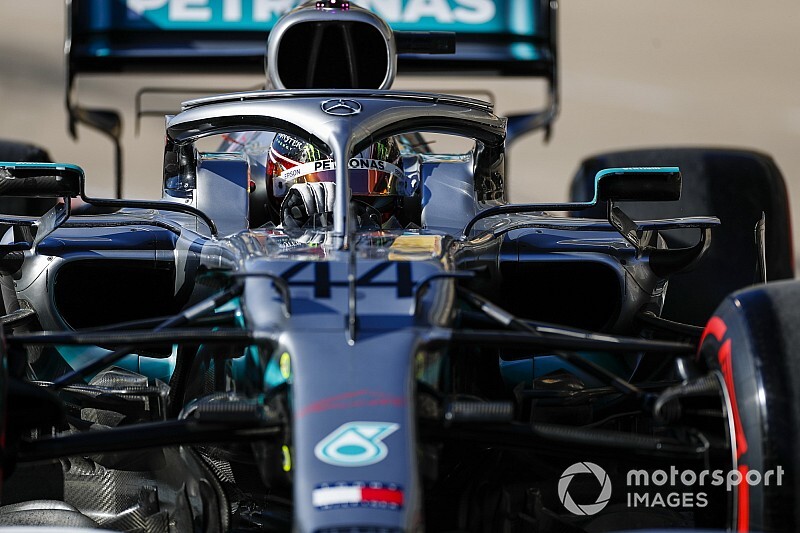 Verstappen was passed by Hamilton as a queue of drivers prepared for their final flying laps in the second part of qualifying at the Circuit of the Americas.

As Verstappen attempted to re-pass Hamilton into the penultimate corner, Hamilton attempted to overtake Daniil Kvyat ahead and locked up trying to avoid Toro Rosso, while in turn forcing Verstappen slightly off-track on the inside.

“We were all lining to do our lap, to get the last corner, and I think it was Seb the first Ferrari and then Charles and then I had Dany in front of me,” said Verstappen.

“And we were all just slowing down, and Lewis just drove by like nobody was there, and didn’t care.

“So I was like, ‘if you don’t care, I don’t care’. I wanted to get my position back, because everyone is respecting each other at that point to start the lap. That is why it was such a close call.”

Verstappen had Daniil Kvyat’s Toro Rosso close ahead entering the final sector on their outlaps in Q2, with Sebastian Vettel further in front but slowing right down in preparation for his own flying lap.

Meanwhile, Hamilton was warned there would be “a bit of bunching” in the final sector of the lap.

After being told that the Ferraris were at the head of the queue and were “yet to go”, Verstappen was passed by Hamilton on the entry to the triple-right at the very end of the lap.

Verstappen sped up and tried to re-pass Hamilton into the next corner, the penultimate turn, but Hamilton attempted to get ahead of Kvyat into the left-hander as well.

As Hamilton moved to the left, and briefly locked his front left, Verstappen had to slow down and swerve over the kerb and run-off and briefly dip his inside front wheel onto the dirt to avoid the Mercedes.

Hamilton passed Kvyat in the move, but as the five-time world champion slowed to create a gap to the Toro Rosso into the final corner, Verstappen charged ahead of both and Hamilton also fell back behind Kvyat.

He had to slow almost to a stop before being able to begin his lap.

As Verstappen started his own flying lap ahead, the Dutchman radioed his team to say: “Lewis f**ked us all, so it’s his f**king problem, what’s happening.”

Kvyat was eliminated from qualifying in Q2 after failing to make it into the top 10 with his flying lap after the incident, and will start 13th after subsequently having the lap deleted for a track-limits offence.

The Russian felt Hamilton had triggered "the mess", but was puzzled by both drivers' behaviour.

"I don't know what they were doing to be honest, it was quite stupid - I mean, not stupid but just not necessary," Kvyat said.

"Just I don't understand why they were racing on the out-lap so much, and yeah, in the end it just made a mess for all three of us, compromised the lap for all three of us. I had to start lap with a very cold tyres, but still... it was OK.

"Normally you want to have an order, but some drivers don't respect that order, and then this mess happens.

"And I think it was Lewis who triggered this. It doesn't matter, for him its Q2, he is already in Q3 by miles. But for me that was the problem.

"In the end, he tried to be the first, but he started the lap behind both of us, so I didn't understand what it was all about.

Verstappen went on to qualify third, while Hamilton – who can win his sixth title on Sunday – will start fifth.