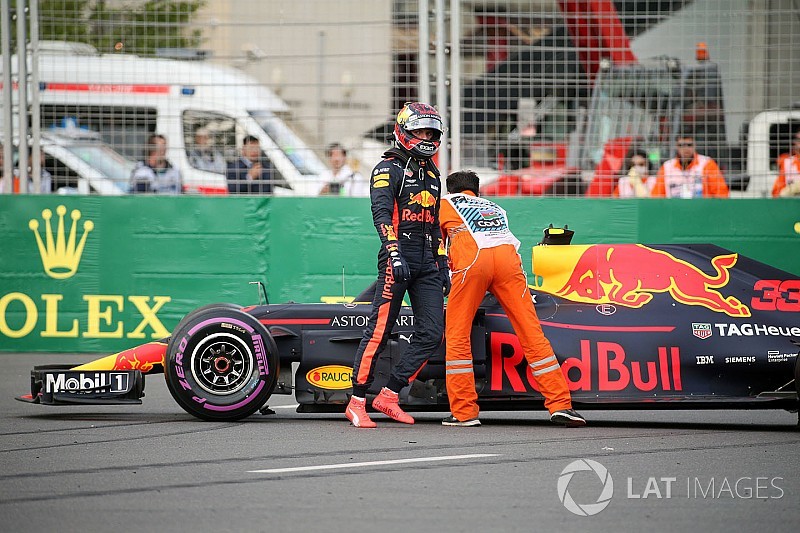 Mercedes non-executive chairman Niki Lauda believes Max Verstappen was 70 percent to blame for the accident with Daniel Ricciardo that took both drivers out of the Azerbaijan Grand Prix.

The Red Bull teammates both retired on the spot after Ricciardo ran into the back of Verstappen on the brakes for Turn 1, in a race where they had already had several moments of wheel-to-wheel racing and had already touched wheels once.

The FIA reprimanded both drivers for the clash, and while Lauda accepted Ricciardo was partly at fault, he felt Verstappen was more responsible for the incident.

When asked by Toto Wolff during the Mercedes team boss's own post-race media session what he would do if he was in charge at Red Bull, Lauda initially joked: "Go home and cry!"

He then added: "For me it's 70 percent Verstappen and 30 percent Ricciardo [to blame]. If you [Verstappen] move on him all the time where [does] the poor guy have to go? It's a very simple thing."

Wolff was initially asked about the collision in the context of how Mercedes had to deal with similar incidents during the Lewis Hamilton/Nico Rosberg rivalry, and Lauda suggested Red Bull should use a tactic Mercedes considered during those years.

"[If they were Mercedes drivers] I would bring them into the office, together with Toto, and tell them how much less they will get paid for the damage they have done," he said.

"We thought about this once, but we didn't have to do it."

Wolff, who said the Red Bull battle was "like a movie" because there were so many flashpoints, added it was tricky to balance the drivers' desire to race hard with the fact they represent a big team of people who work so hard for them behind the scenes.

"I've been there twice, in Spa [2014] and Barcelona [2016]," he said, referencing the two highest-profile incidents between Hamilton and Rosberg.

"You have to remind the guys that beyond all the racing they are here for, there is a large structure in the background that is working 24/7 to provide them with the best possible cars.

"But equally you don't want the lion's spirit to be taken away from the driver.

"I've said it before: you can't expect to have guard dogs in the car to behave like puppies. There is an upside and a downside to having to fast drivers in the car that race each other hard."