Valentino Rossi and Ferrari in F1: What might have been? 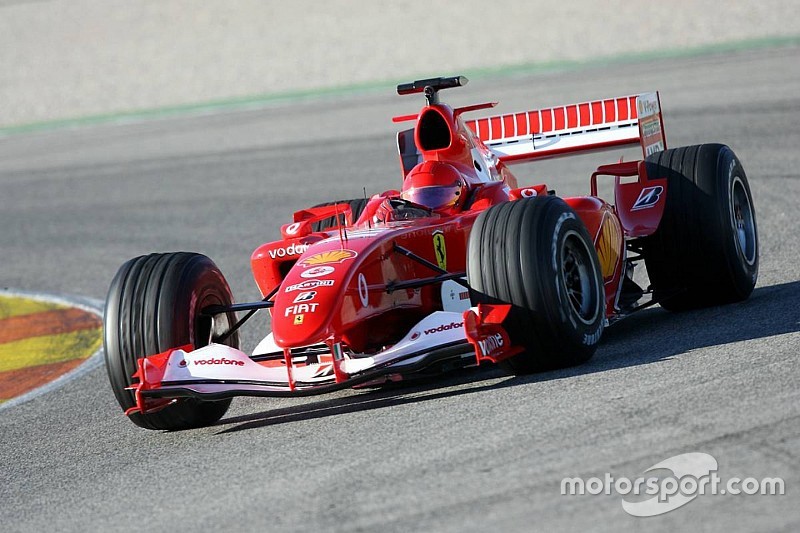 It was over a decade ago when MotoGP legend Rossi first took part in a bona fide F1 group test for Ferrari, lapping 0.7s off the pace of Michael Schumacher and putting him squarely in the frame for a switch of codes that would have shaken the world – had it happened.

“I didn’t give him any advice, he doesn’t need it,” said Schuey of the test. Michael had set a time of 1m11.640s with Rossi, driving an older spec of car and engine, lapping in 1m12.362s. Certainly in the mix, and only the engineers could tell you what his genuine potential was.

Rossi flirted regularly with F1, testing for Ferrari a number of times between 2004 and 2010. Much of the time it was a stated intention that it was “just for fun” – Italy’s racing legends combined, a mutual love-in.

But Rossi has always been the ultimate competitor. Just for fun? I don’t think he knows the meaning of the phrase when the visor is down!

And how about taking the plunge into marriage: as outlandish as it sounds today, how close did Rossi and Ferrari actually come to joining forces to take on the F1 world?

We’ve heard a few whispers that it almost happened. For example, Rossi’s father has stated that his son was “very, very close” to making the switch in that 2006-7 period. It was an era, as McLaren’s Lewis Hamilton subsequently proved, where you could make a sizeable impact with a suitable amount of testing – which was not a problem in those days.

Following that, Ferrari boss Luca di Montezemolo subsequently claimed he would have fielded Rossi in a third car – had the rules allowed it. And you’d have to think that Rossi would have given that serious thought, given the opportunity.

Rossi first tested a Ferrari F1 car at Fiorano in April 2004 – even wearing one of Schumacher’s spare helmets rather than one of his own.

“It was a very exciting day for me,” he said at the time. “Driving an F1 car was an amazing experience, and it was great for me to follow in Schumacher’s footsteps for a day.”

Schumacher, who was present at the test, commented: “Of course, it took him a while to get used to it, but he was very impressive by the end of the day.

“I know he has done some karting, but at the end of the day, when you have racing in your blood, you know what to do.”

Rossi had a similar mid-season shakedown run at Fiorano in 2005, this time with Marc Gene on hand for advice, and was clearly getting a taste for it: “I wanted to get a better understanding of a Formula 1 car – it was intensive and interesting.

“I completed a lot of kilometres, and I began to understand the handling of the car.” You got the sense he wanted more…

“I have to say that I felt at home and did not have any particular problems – perhaps I have to practice a little in driving in the wet,” Rossi quipped after spinning on his only lap in a wet opening day.

And this is where the door for the F1 leap was perhaps at its most-wide open. Rossi fell short of another MotoGP title in 2006, narrowly beaten by Honda’s Nicky Hayden, but he insisted that the F1 tests – now with over 1000km of running under his belt – “did not distract” him.

Unbeknown to everyone at that point, Schumacher’s days at Ferrari were numbered. Kimi Raikkonen would join for 2007, and grab the F1 title at his first attempt with the Scuderia. Rossi too had been in a ‘contract year’ but re-signed with Yamaha in June 2006 to go on to claim two more MotoGP titles.

Imagine if different decisions had been made at that point – the ramifications would have been immense on both sides of the car and motorbike racing world.

Rossi was back behind the wheel of a Ferrari a few years later, driving a 2008-spec car with the Corse Clienti operation, and enjoying some more serious running around Mugello and Barcelona. But that really did look like it was for fun, unlike that serious 2006 test.

Was that Rossi’s last chance?

As Stefano Domenicali mused after his most-recent test run in 2010: “Vale would have been an excellent Formula 1 driver, but he chose a different road. He’s part of our family and that’s why we wanted to give him this opportunity.

“We’re happy to be together once again; two Italian symbols like Ferrari and Valentino Rossi.”

But perhaps Rossi’s last true chance of racing in F1 for Ferrari came in 2009, following Felipe Massa’s injury in Hungary. After Luca Badoer struggled in the next two races, and with little to lose, Rossi suddenly entered into its thinking for Monza…

“I talked with Ferrari about racing at Monza,” Rossi has been quoted as saying. “But without testing... it would not have been logical.

“We already decided that to enter Formula 1 without testing is more risky than fun. You can’t go there and do everything to understand the car in three days.”

You can see his point. And the 2009 Ferrari was a bit of dog too, relatively speaking.

But how about that 2007 beauty? A car which won over half of the races that season – Raikkonen winning six of them, Felipe Massa three. It makes you wonder what might have been if he’d ‘done a John Surtees’…

Imagine a 2007 season where both Lewis Hamilton and Rossi would have made their Grand Prix debuts? How cool would that have been?

If both were granted similar levels of pre-season testing, just think how fascinating it would have been to watch their careers pan out.

Could Rossi have learnt four-wheeled racecraft to match his undoubted ability on two wheels? He remains one of the best fighters in MotoGP, and that combination of Rossi and Ferrari would have surely drawn so much coverage to F1 – and, of course, robbed MotoGP of its biggest box office attraction.

How real was that 0.7s deficit to Schumacher on that day in Valencia? Did he think that was too much? Was he seeing things in Schumacher’s data that he couldn’t emulate?

Bottom line is that he didn’t want it that much to make it happen. His passion for bike racing is his life, after all.

And when you’ve just seen an F1 World Champion retire at the age of 31, it makes Rossi’s decision to race at the top level on two wheels right up until the beginning of his 40s even more impressive.