Rita Barbera, Valencia mayor: "The budget of Valencia is for Valencians,"

Sep.16 (GMM) The mayor of Valencia rejected a proposal that might have saved the European Grand Prix.

When it became clear the race on the streets of the Spanish port city was no longer financially viable, the regional president Alberto Fabra made a proposal to the Valencia mayor, Rita Barbera. 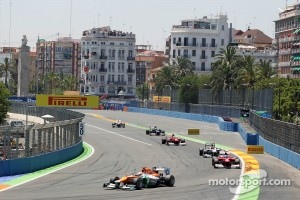 Formula One race at Valencia

"He spoke of the possibility of involvement, but he spoke to me about Cheste, and I have an urban circuit," Barbera is quoted by El Pais newspaper.

"The budget of Valencia is for Valencians," she insisted.

The permanent Ricardo Tormo circuit, located 26 kilometres from Valencia in Cheste, hosts a MotoGP race. It has also been a popular circuit for F1 testing.

Meanwhile, Bernie Ecclestone has cast doubt on India's hopes of returning to the calendar in 2015, after it emerged Delhi will not host a race next year.

But the F1 chief executive told Sportbusiness International: "The trouble in India is a simple one. The rupee has devalued an enormous amount so it is all very political.

"We won't be there next year but after that I hope we will go back," added Ecclestone.

F1: Turkish GP under threat due to UK red-list