Fernando Alonso took his 29th Formula 1 victory and one of the best in his career at the 2012 European Grand Prix at Valencia. But it was also the race that marked the final time Michael Schumacher would stand on the podium.

The 2012 European Grand Prix is rightly remembered as one of the most chaotic races in recent Formula 1 history, becoming the scene of an all-time great's finest outing.

Fernando Alonso's charge from 11th on the grid to win on home soil in Valencia has gone down as being one of his most emotional and memorable victories.

And as Alonso burst into tears upon hearing the Spanish national anthem on the podium, the man stood to his left was also drinking in a landmark result - and one that has become all the more important in hindsight. It was the 155th and final time that Michael Schumacher would stand on an F1 podium, acting as the final hurrah in a decorated career.

Schumacher's 2012 season had been a difficult one up to Valencia. While the first two years of his comeback with Mercedes had offered little to really celebrate, 2012 had far more potential, only for circumstances largely outside his control to sap away much of the excitement.

Nico Rosberg took Mercedes' first grand prix win as a works team in over 50 years in China, proving the advances that had been made with the W03 car. But while Schumacher had looked quick enough for a podium a loose wheel forced him to retire after his first pit stop.

Further chances for good results had passed by in Australia and, most notably, Monaco, where he scored pole position before being demoted to sixth on the grid as a result of a penalty carried over from the previous race in Spain.

Arriving in Valencia, Schumacher had a paltry two points to show for the opening seven races of the season, after picking up 10th in Malaysia and Bahrain. Even in the twilight of his career, it was hardly the kind of form a seven-time world champion could be proud of. 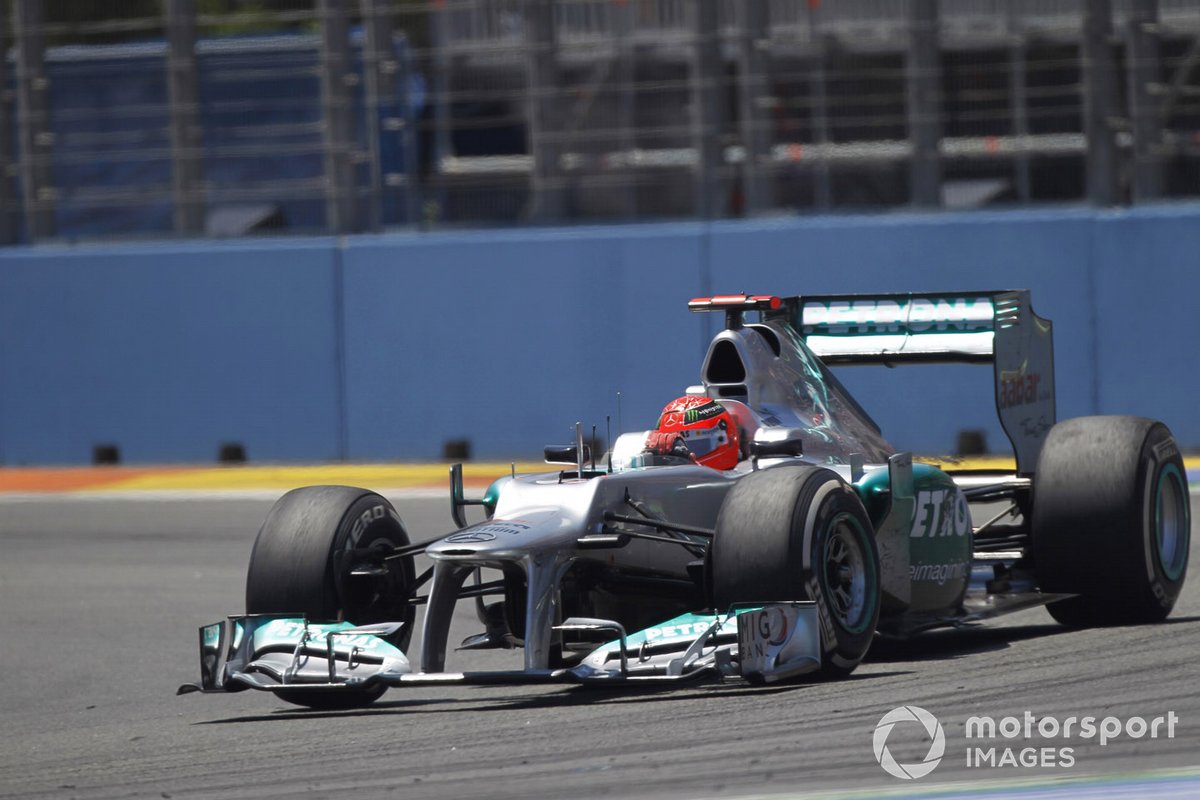 Schumacher struggled in qualifying around the much-maligned Valencia street circuit, which would be hosting its fifth and final F1 race in 2012. He made a mistake on his first run in Q2 before playing it safe with his second effort, leaving him down in 12th place on the grid. He would start alongside Alonso on the sixth row, with neither seeming like real candidates for a podium finish.

As Alonso vaulted up to eighth on the opening lap, Schumacher struggled early on. He survived a tap from Spain adversary Bruno Senna (above) at Turn 1, then lost a position to the recovering Jenson Button on lap three, leaving him 13th through the first stint with plans to one-stop after a long run on mediums.

The high temperatures in Valencia prompted Mercedes to change plans before Schumacher came in for his first pit stop after some brilliant defence from Alonso, who was on far fresher tyres. The team switched Schumacher to a two-stop and gave him a set of soft tyres. It dropped him as far back as 17th.

Debris left on the track after a clash between Jean-Eric Vergne and Heikki Kovalainen caused the safety car to be called, prompting most of the drivers to come in for their second stop. Having only come in 10 laps earlier, there was little value in Schumacher doing the same, allowing him to rise up as high as seventh for the restart.

His seventh spot became sixth when dominant race leader Sebastian Vettel suffered an alternator failure, and Schumacher soon found himself in fifth after Toro Rosso's Daniel Ricciardo pitted. The Mercedes driver had done well to keep the likes of Mark Webber and Pastor Maldonado behind, but still had to make a second stop to put on a final set of softs to see him to the finish. 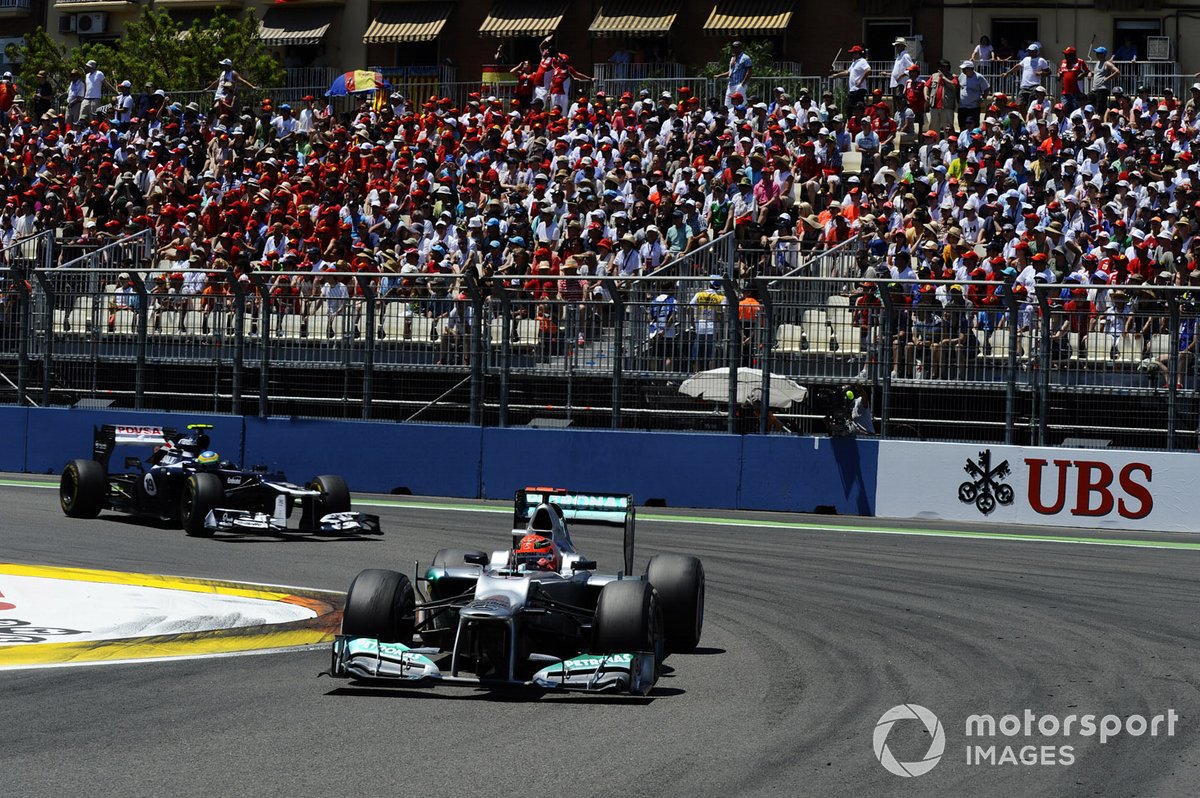 Emerging from the pits in 11th with 16 laps to go, Schumacher's pace had been good enough to fend off the undercutting Webber - something that would later prove crucial - and he now had far fresher tyres that allowed him to go on a late charge.

As Schumacher picked off drivers, he towed Webber along with him, drawing in the drivers ahead who struggled in the high temperatures. The softs were clearly the right tyre to be on as they ran almost one second per lap faster than race leader Alonso.

The pair passed Vitaly Petrov before easing ahead of Button in the McLaren. Sergio Perez and Paul di Resta were overtaken on consecutive laps, which combined with Rosberg's late pit stop had lifted Schumacher back up to fifth place. A decent haul of points was finally on.

And on the penultimate lap, a podium dropped into Schumacher's hands - but not without one final overtake. As Force India's Nico Hulkenberg's tyres faded, he too fell into the clutches of the Mercedes and was passed before Schumacher led the train past the wingless Williams of Maldonado, who carried damage after biffing Lewis Hamilton into the wall while scrapping over third place.

The final podium spot now belonged to Schumacher, who was able to retain the position despite Webber's late pressure to score his first podium since the 2006 Chinese Grand Prix - some 99 races earlier. Schumacher didn't even realise he had finished third initially.

"I asked my guys where we finished," Schumacher said. "I saw Webber's pitboard and close to the end it showed him eighth and seventh, and knew I was one place ahead of that one.

"Then the boys told me third, that's a podium, and I thought I can't believe that! It is something I didn't expect, you sort of lose count, because I was pretty busy in those last stages of the race, plus Hamilton and Maldonado had their issue, so I lost counting at that stage." 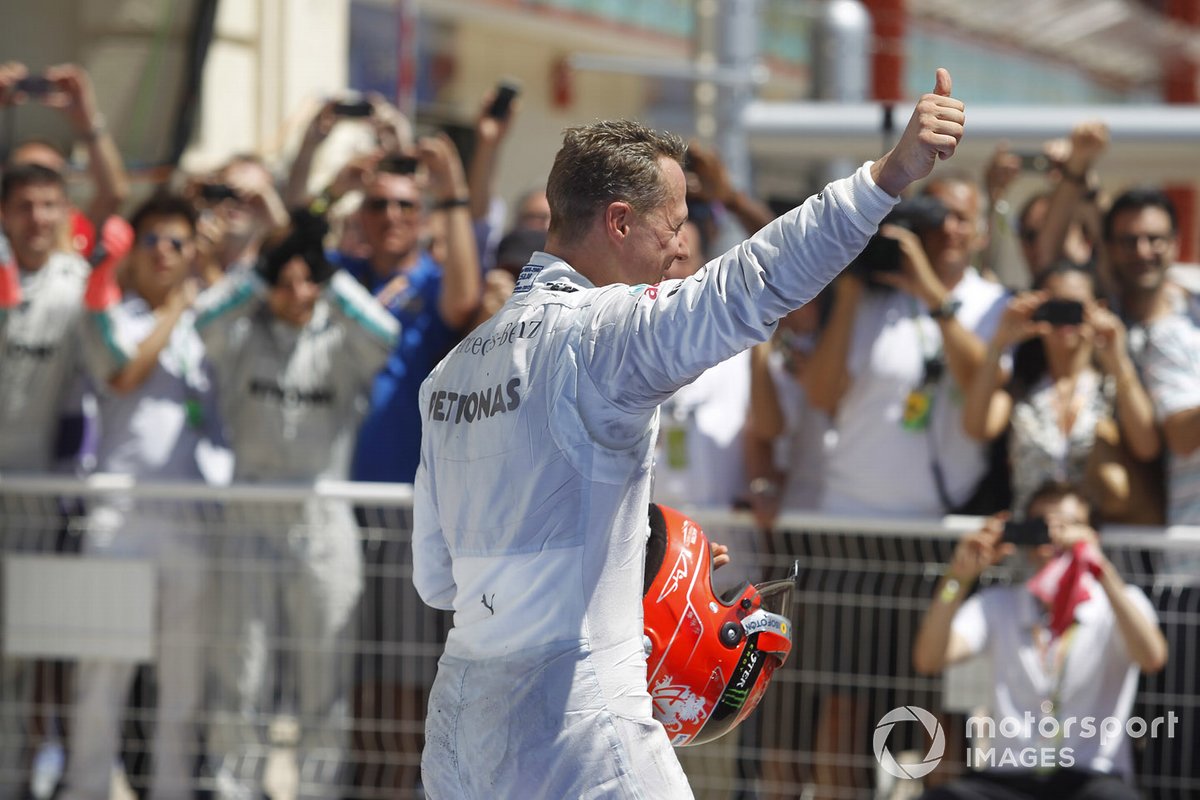 But that did not show a lack of interest from Schumacher, something he could perhaps be forgiven for given his trophy-laden career. Far from it. This podium meant an enormous amount as the first since his comeback in 2010.

"It's just a wonderful feeling to be back after such a long time," he said. "We were a couple of times close to it, and finally it happened in a very spectacular way and on a track where it is difficult to pass.

"But due to various strategies and differences on track it was pretty exciting and that is the best way if you manage the way I did today to jump on the podium. To do it in an exciting way makes me extra happy.

"That is what I am here for, to be excited, hearing finally the message P3 is a sweet finish to an unexpected race."

Mercedes motorsport chief Norbert Haug hoped it would be the start of many more podiums to follow from Schumacher.

"It is important and more podiums will come when we give him the car he needs in terms of speed and reliability," Haug told Autosport.

"He could have said: 'I won 91 races, why should I be happy?' But he was genuinely pleased and it was wrong to say it was inherited.

"With two laps to go he was fifth, but I can tell you a lot of stories where he was fifth and things went against him. What we could see in Valencia was that the genuine speed was there."

This show of genuine speed added to calls for Mercedes to sort out a new contract for Schumacher as the German hoped into 2013. But Haug dismissed it as a "separate story" and something it would "talk later" to him about.

Of course, the wheels were in motion behind the scenes for the frustrated Hamilton to exit McLaren and join Mercedes for 2013, leaving Schumacher out of a drive and forcing him into an unplanned exit from F1 for a second time. On this occasion, it would prove permanent.

Valencia did give Schumacher a boost for the rest of the season, even if it wasn't enough to save his seat. He outscored teammate Rosberg 32-18, helping Mercedes beat Sauber to fifth place in the constructors' standings.

It may not have come with the traditional fanfare of the German national anthem, but seeing Schumacher back on an F1 podium pleased the vast majority of the F1 community. Even after 154 previous visits, few could begrudge him this one. 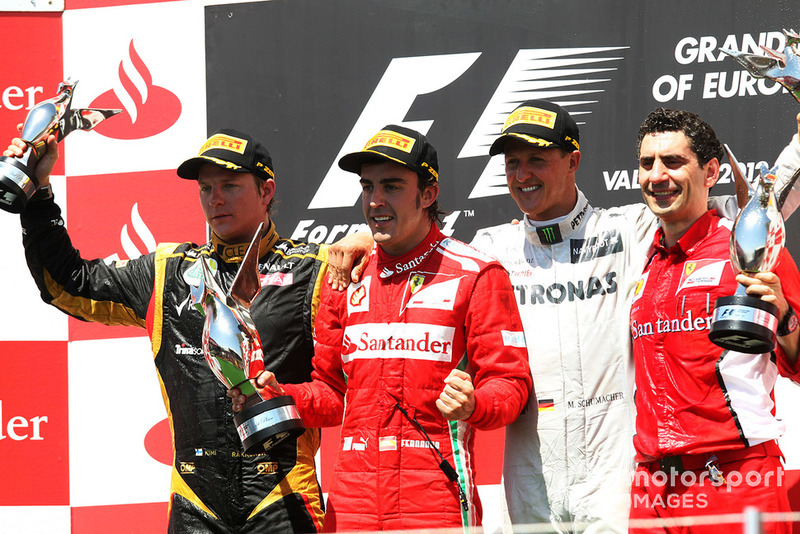