Jamaican superstar Usain Bolt won another Olympic gold medal this afternoon as he set an Olympic Games record in winning the 100 meters, but the Lotus F1 team is only mildly impressed.

Lotus Formula 1 Team reckons that the world-record time of 9.58 seconds that Bolt posted in winning the 2009 World Championships is good – but not as good as the Lotus E20. The Kimi Raikkonen car would cover 100 meters in 4.25 seconds and would reach 150km/hr (93 mph) as a top speed, compared to Bolt’s 28-mph top speed in the same distance. Advantage Lotus

Of course, Bolt’s 93 kilos (204 lbs.) is much lighter than the 640 kilos (1408 pounds) of the E20, but the horsepower advantage more than makes up for this disadvantge. Advantage Lotus

As for maintenance and running costs. All Usain needs is a pair of runners, and three square meals a day, total approx $200. A quick internet search and the figure of 10,000 dollars a mile to run an F1 car seems to be a reasonable estimate. So this works out to $621 dollars for 100 meters. Advantage Bolt

Now as efficient as the Lotus Renault engine technology is, Usain Bolt wins again when it comes to being environmentally friendly. Advantage Bolt

And in the category that counts the most, Lotus has eight podium finishes this year, but no wins, and none of the Lotus awards have been gold Olympic Medals of which Usain Bolt now has four and this Olympics is not yet over. 1st place is all anyone remembers. Advantage Bolt

We would love to see this race. Perhaps Lotus or the Red Bull Racing promotional team can make it happen?

Though Judging from this photo uploaded by a Motorsport.com user. Usain Bolt may be more of a Ferrari fan. 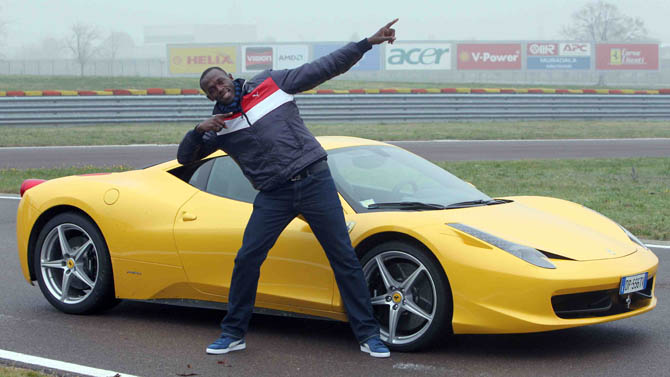 Usain Bolt with a Ferrari 458

Schumacher 'should know the rules' - Whiting