US GP: Hamilton dominates as Red Bull trips up 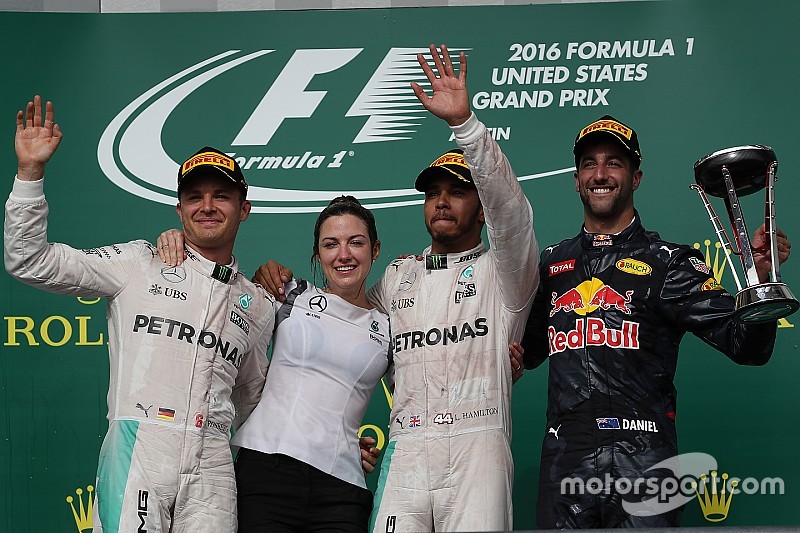 Lewis Hamilton dominated the United States GP in Austin, but didn’t gain as many points as he’d hoped on Mercedes teammate Nico Rosberg who was gifted second place over Red Bull’s Daniel Ricciardo thanks to a fortuitously-timed Virtual Safety Car.

It was Hamilton’s fifth victory in America, matching Michael Schumacher’s record. He led almost every lap, but the battle for second was much more keenly fought, as Ricciardo grabbed the position from Rosberg at the second corner of the opening lap.

His strategy was compromised, however, by the timing of a Virtual Safety Car – ironically for Ricciardo's teammate Max Verstappen’s stranded car – which gifted Rosberg a ‘free’ final pitstop.

Rosberg’s pace on fresher tyres in the latter stages meant he not only gained the track position but was able to pull well clear.

Verstappen’s race had earlier been delayed by a disastrous second pitstop, when he stopped unexpectedly and lost a heap of time as Red Bull scrambled to service his car. That became academic, however, when he suffered a mechanical failure a few laps later.

Ferrari’s Sebastian Vettel finished a distant fourth, but was running behind teammate Kimi Raikkonen when the Finn suffered a pitstop calamity of his own, which resulted in his retirement.

From pole position, Hamilton led Rosberg into Turn 1 as Ricciardo nosed ahead of Rosberg around the outside Turn 2, forcing the German to lift off. The fast-starting Raikkonen grabbed fourth from Verstappen, ahead of Vettel, Felipe Massa (Williams), Carlos Sainz (Toro Rosso), Sergio Perez (Force India) and the second Toro Rosso of Kvyat.

Seventh-placed starter Nico Hulkenberg’s Force India was pinched by Vettel and the Williams of Valtteri Bottas at Turn 1, making harsh contact with Bottas that caused the Williams to jump into the air briefly.

“Big damage on the front,” said Hulkenberg, who was an opening lap retirement with trackrod damage. “Puncture, puncture,” said Bottas, who pitted for a new right-rear tyre.

Vettel attacked Verstappen for fifth, but despite drawing alongside twice on the opening lap he failed to make it past.

Force India’s poor first lap was compounded when Perez was punted into a spin by Kvyat, and tumbled to 15th. “What a [bleeping] idiot,” said Perez, who recovered and passed Kvyat (who was given a 10s pitstop time penalty) on lap six.

Hamilton led Ricciardo by 0.8s at the end of the opening lap, with Rosberg running third from Raikkonen, Verstappen and Vettel. With Hamilton, Rosberg and Verstappen starting on the soft tyres, Ricciardo and Raikkonen pitted on lap nine to get rid of their supersofts.

“Pushing hard is not the long game,” Rosberg argued when being told raise his pace on lap nine.

Despite starting on softs, Verstappen pitted early on lap 10, so Rosberg responded by stopping a lap later and rejoined on the medium tyre. That put Raikkonen right on Rosberg’s tail, despite getting held up by passing the McLarens of Jenson Button and Fernando Alonso.

Hamilton pitted on lap 12 after a perfect first stint, rejoining well clear of Ricciardo on the softs.

Verstappen, who was the fastest man on the track on his second set of softs, passed Raikkonen for fifth on lap 13 – and then set his sights on Rosberg.

Vettel stayed out on the supersofts he started with for a long first stint, and pitted on lap 15 for softs – allowing Hamilton to take up his rightful position.

Hamilton was 5s clear up front by lap 20, with Ricciardo, Rosberg and the rapid Verstappen running in tandem behind. When told to ensure he reached his stint-length target, Verstappen fired back: “I’m not here to finish fourth.”

Vettel reeled in Raikkonen on during his second stint, after suffering the pain of his long first run, and Ferrari opted to pit Raikkonen early for another set of supersofts on lap 25, rejoining just ahead of Massa.

Rosberg closed to within DRS range of Ricciardo by lap 25, which spurred Ricciardo to take his second pitstop – switching to the mediums.

Verstappen pitted on lap 27, but it was a calamitous stop as his team were not ready for him.

“What happened Max?” his engineer asked. “I thought you boxed me, sorry,” said Verstappen, who dropped to seventh behind Vettel, Raikkonen and Massa.

That became academic when he suffered a technical failure as he shifted to fourth gear a few laps later, which forced him to pull off the track on lap 31. “I have an engine failure I think, or something,” he said. “There is something hitting the engine, the faster I drive the harder it hits.”

Retrieval of the stricken Red Bull caused a Virtual Safety Car, which fell inside Hamilton’s pit window – with Rosberg also taking advantage to pit for a fresh set of mediums. That annoyed Ricciardo, who effectively lost second position as a result of the VSC.

Rosberg bizarrely almost overtook a Manor as he rejoined on the run to Turn 1.

As the race resumed, Hamilton held a 10s lead over Rosberg, with Ricciardo – now 4s behind him – coming under attack from the three-stopping Raikkonen.

But Raikkonen was forced to retire after a disastrous third pitstop, after which he was told to stop at the pitlane exit due to a loose right-rear wheel. “Stop, stop! There was a gun still attached,” he was told. After rolling backwards into the pitlane, Raikkonen climbed out of his stricken car.

Vettel, now running a distant fourth, was told he was suffering “rear-wing drop-outs” to which he responded incredulously: “Some? Some is good. Keep joking.”

Sainz, Massa and Alonso fought out an epic late duel for fifth, with Alonso grabbing sixth with a bold move – the included firm contact – with four laps remaining. “Felipe closed me, I was already alongside him,” claimed Fernando.

Massa had to pit due to a puncture, but finished seventh regardless.

Alonso snatched fifth from Sainz on the penultimate lap, despite overshooting his braking zone and running wide, shouting “yee-haw!” over the radio.

Earlier, Alonso had a radio rant on lap 13 after his first stop: “Behind the Renault, what a disaster,” he grumbled.

After his Q1 disaster yesterday, Button charged up from 19th to 10th by lap three. He would eventually inherit ninth, ahead of the Haas of Romain Grosjean.

The delayed Kvyat and Renault’s Kevin Magnussen fought a late battle for 11th, with Magnussen grabbing the spot, ahead of Jolyon Palmer (Renault) and Sauber’s Marcus Ericsson. Felipe Nasr finished 15th for Sauber, passing Bottas late on, ahead of the Manors of Pascal Werhlein and Esteban Ocon.

Haas’s Esteban Gutierrez toured to the pits after a huge lockup on lap 16, and retired soon after.

US GP: Top 10 quotes after race