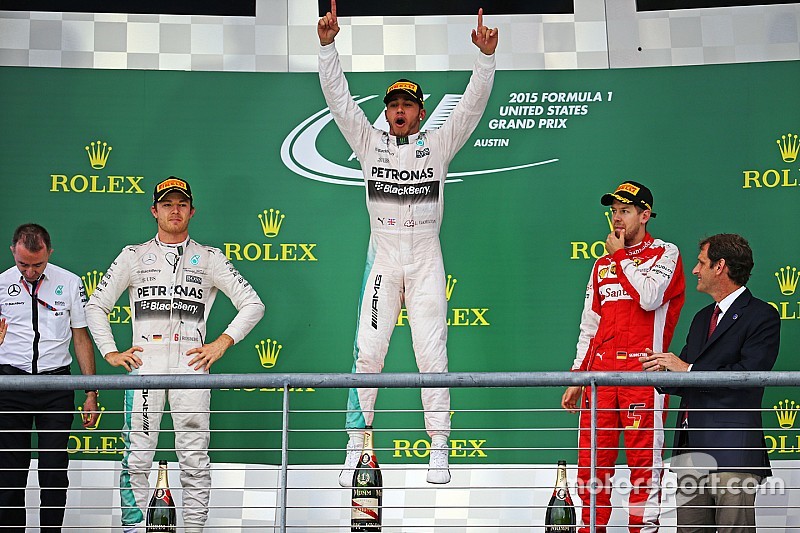 Lewis Hamilton won his third F1 World Championship thanks to a late-race mistake by Mercedes teammate Nico Rosberg that decided the winner of the United States Grand Prix.

In a dramatic race of changing fortunes, it looked like Hamilton had lost his chance to claim the title in Austin as Rosberg had been able to pit under a Virtual Safety Car, while the Brit stayed out.

But another Safety Car, after Daniil Kvyat crashed out, allowed Hamilton to get back onto the German's tail.

With just under 10 laps to go, Rosberg lit up his rear tyres exiting Turn 16 and slid off the track through Turn 17, allowing Hamilton to cruise past and take his 43rd grand prix victory and third world crown.

"This is the greatest moment of my life," said Hamilton on his in-lap.

Rosberg finished second, ahead of Ferrari's Sebastian Vettel, the only other man who could deny Hamilton the title today.

Vettel could have kept the championship alive had he passed Rosberg for second, but failed to do this by half a second.

From pole position on a damp track, with the entire field on intermediate tyres, Rosberg didn't make a great start and Hamilton quickly drew alongside him. They went into Turn 1 side by side, with Hamilton shoving Rosberg off the track as he claimed the lead, briefly touching wheels, dropping Nico down to fifth.

The Red Bulls ran through Turn 2 side by side, with Kvyat establishing himself ahead of Daniel Ricciardo. Rosberg got straight back past Sergio Perez's fast-starting Force India to claim fourth, but struggled to make inroads into Ricciardo.

Hamilton led the opening lap by 1.4s from Kvyat, Ricciardo, Rosberg and Perez.

Kvyat closed right up to Hamilton's tail over the next three laps, and passed him at Turn 1, but overshot the corner.

Vettel had moved up to ninth on the opening lap, after starting 13th due to a 10-place grid penalty for his upgraded Ferrari engine, and picked his way through to sixth by lap five.

The Virtual Safety Car was then required to clear the track of debris after multiple first-corner collisions.

At the restart, after Hamilton had backed the top four together, Rosberg jumped Ricciardo for third through the Esses. "How the [bleep] did Nico pass us?" Ricciardo asked as Rosberg then passed Kvyat for second at Turn 12.

Rosberg had great pace at this stage, and closed up to Hamilton, with the Red Bull duo staying in touch. But Hamilton pulled away again as the inters began to get towards the end of their life, with Rosberg coming under attack again from Kvyat on lap 11.

Kvyat divebombed Rosberg at Turn 20, but ran wide and allowed Ricciardo up to third. But Rosberg then ran wide at Turn 1 on the next lap, so Ricciardo was catapulted to second to chase down leader Hamilton.

Ricciardo attacked Hamilton at Turn 1 on lap 15, and made a pass for the lead stick at Turn 18 after Lewis went wide, the Aussie able to slice inside him through the left-hand sweepers.

Rosberg then attacked Hamilton, as Ricciardo extended his lead to 2.6s.

Rosberg took second from Hamilton on lap 18, as Lewis was told to pit. Kvyat almost got past Hamilton too, before he dived into the pits and rejoined on soft-compound slicks.

Ricciardo pitted from the lead on lap 19, with Rosberg, Kvyat, Perez and Vettel following suit. Hamilton locked up and went straight on at Turn 1 as Rosberg and Kvyat rejoined ahead of him.

Ricciardo lost 5s in the middle sector of his outlap after going wide at Turn 7, but led by 3.1s from Rosberg, Kvyat and Hamilton.

However, te German slashed 2s from Ricciardo's lead on lap 21, as Hamilton attacked Kvyat – with fifth-placed Vettel closing on all of them.

Rosberg passed Ricciardo for the lead with ease, with Hamilton likewise DRS-ing past Kvyat.

Rosberg was so rapid at this point he was extended his lead by almost 3s per lap, while Hamilton's pace was restricted by Ricciardo ahead of him. He passed him at Turn 12 on lap 26, but was over 10s in arrears behind leader Rosberg.

Vettel passed Kvyat for fourth on lap 24 at Turn 1.

The Safety Car was then required to retrieve Marcus Ericsson's stranded Sauber, Vettel taking the opportunity to pit. Vettel's right-front change was slow, and he rejoined on the medium-compound tyre.

The race restarted in the order: Rosberg, Hamilton, Ricciardo and Kvyat, with Vettel running fifth on a brand-new set of mediums knowing that those ahead would have to stop again. Verstappen, in sixth, opted for a fresh set of softs during his Safety Car pitstop.

At the restart, Kvyat locked up and ran wide at Turn 1, allowing Vettel up to fourth.

Rosberg, meanwhile, scampered away up front, as Vettel grabbed third from Ricciardo when the Australian ran wide at Turn 12, only for Ricciardo to fight back past him at Turn 13 after Vettel himself made a mistake.

Vettel made the move stick through Turn 1/2 on the next lap, after Ricciardo ran wide. Verstappen passed Kvyat, who went off at Turn 12 and allowed Hulkenberg (who had pitted for fresh mediums under the Safety Car) passed him to take sixth.

Verstappen then passed Ricciardo for fourth, before Hulkenberg clanged into the side of Ricciardo on lap 36, taking himself out of the race.

Out front, Hamilton began to close the gap on Rosberg with 20 laps to go, and was in DRS zone by lap 35. Vettel was 8s in arrears at this point, under no threat from Verstappen.

Kvyat DRS-ed past Ricciardo just before another VSC was required to retrieve Hulkenberg's stranded Force India.

That allowed Rosberg to pit, ruining Vettel's best hope of victory, with Hamilton staying out – any hope of him sealing the title today seeming lost. Kvyat and Ricciardo pitted, Red Bull stacking their cars briefly.

Hamilton restarted without getting the chance to pit under the VSC, leading the race by 4.9s over Vettel. Verstappen was third, ahead of Rosberg, with Button up to fifth, ahead of Perez.

Rosberg outdragged Verstappen on the back straight to take third on lap 40, and was in striking distance of Vettel. He took 2.4s out of Vettel on lap 41 alone, and DRS-ed past him on the backstraight on the following tour.

Button and Alonso were up to fifth and sixth, but the race was interrupted again as Kvyat crashed out exiting the penultimate corner. "Sorry, guys," he said, shaken but unhurt.

Hamilton got his crucial 'free' pitstop as the Safety Car was called upon again, rejoining behind Rosberg but ahead of Verstappen.

Vettel also pitted for softs, only losing a place to Verstappen.

The crucial charge to the finish

The race restarted again with 10 laps to go with Rosberg leading Hamilton by 1.1s, ahead of Verstappen and Vettel. McLaren's Jenson Button pitted from fifth, promoting Alonso, Perez and the damaged car of Ricciardo.

Vettel outpowered Verstappen on the backstraight for third, while Rosberg extended his lead to 1.6s over the first post-restart lap, with the Ferrari of Vettel already 3s back.

But then Rosberg made his crucial mistake and went off at Turn 17, handing the lead to Hamilton on lap 47 – and effectively the championship too. "I don't know what happened," he rued post-race.

The Briton took a 2.6s lead, which Rosberg was unable to do anything about as he slipped back towards third-placed Vettel.

Vettel got DRS on Rosberg on the last lap, locking up and sliding wide at Turn 1. He finished right behind his fellow German at the finish.

Verstappen finished a distant fourth, ahead of Perez. Sainz passed Button for sixth with a couple of laps remaining, but has a 5s time penalty for speeding in the pitlane.

The Spaniard had earlier barged into Ricciardo under braking at Turn 12, Ricciardo then tumbling back down the order.

Sainz dropped behind Button when the penalty was applied, with Pastor Maldonado (Lotus), Sauber's Felipe Nasr and Ricciardo rounding out of the points scorers.

A power-sapped Fernando Alonso was 11th, having run as high as fifth, while local hero Alexander Rossi finished 12th.

Lauda hails Hamilton: "He will get better"