Join us as we delve into the latest technical developments on display at the Turkish Grand Prix at Istanbul Park, courtesy of Giorgio Piola. 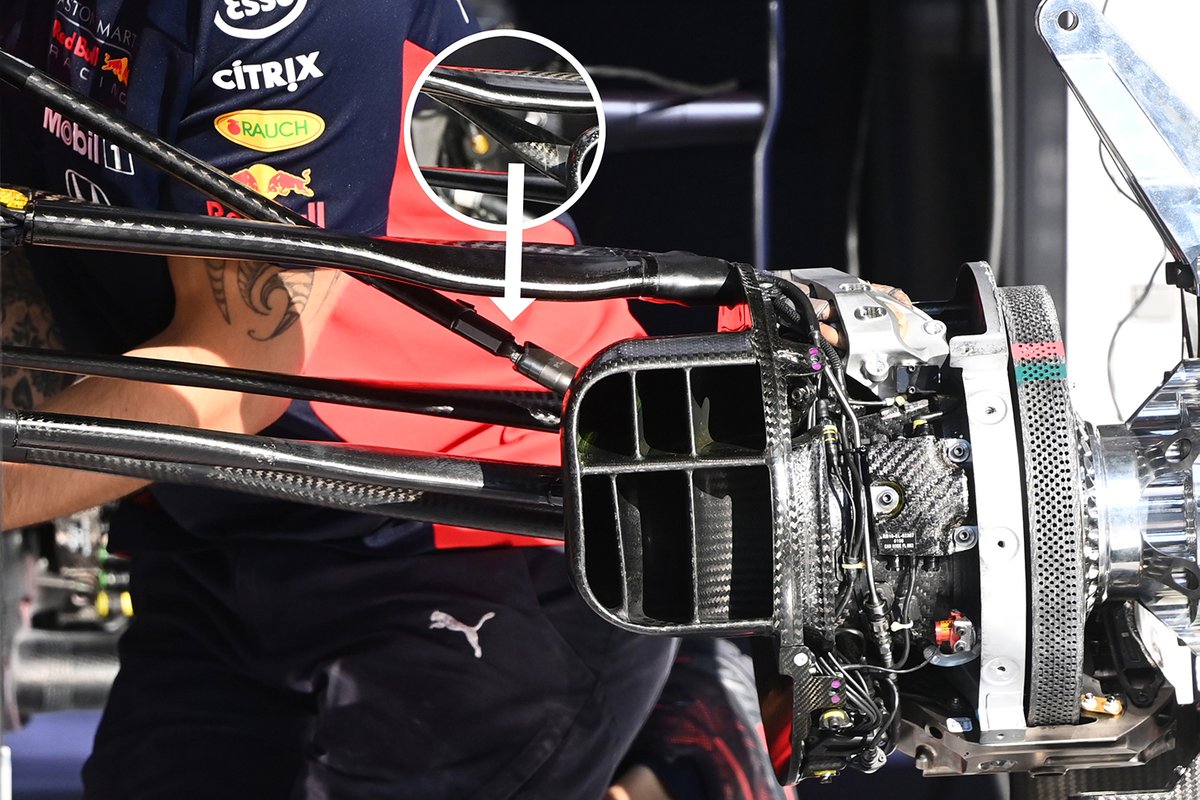 This image of the Red Bull reveals the adjustability of the pushrod beneath the aerodynamic fairing.
AlphaTauri AT01 front brake detail 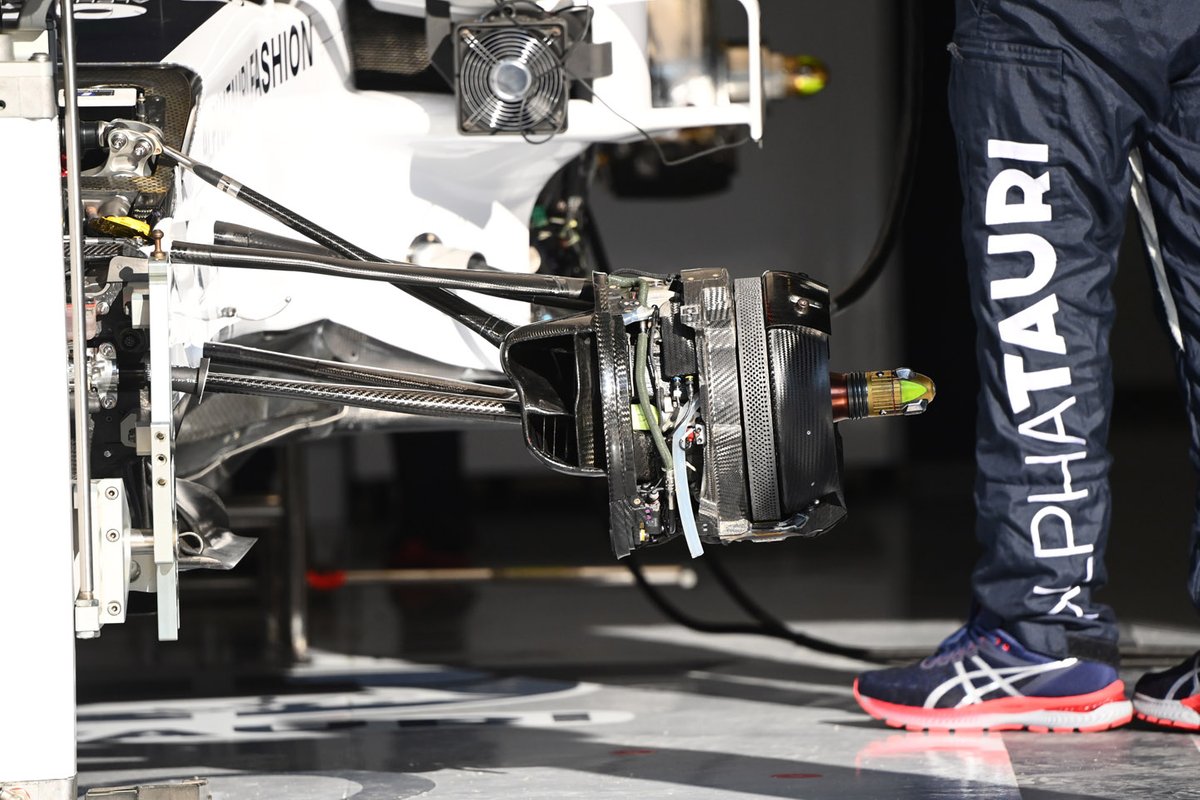 A look at the Alpha Tauri AT01’s front brake assembly prior to the brake drum being installed - note the cowl mounted to the right of the disc, this will help to direct the airflow crossing across the face of the assembly once the drum has been mounted.
AlphaTauri AT01 front brake detail 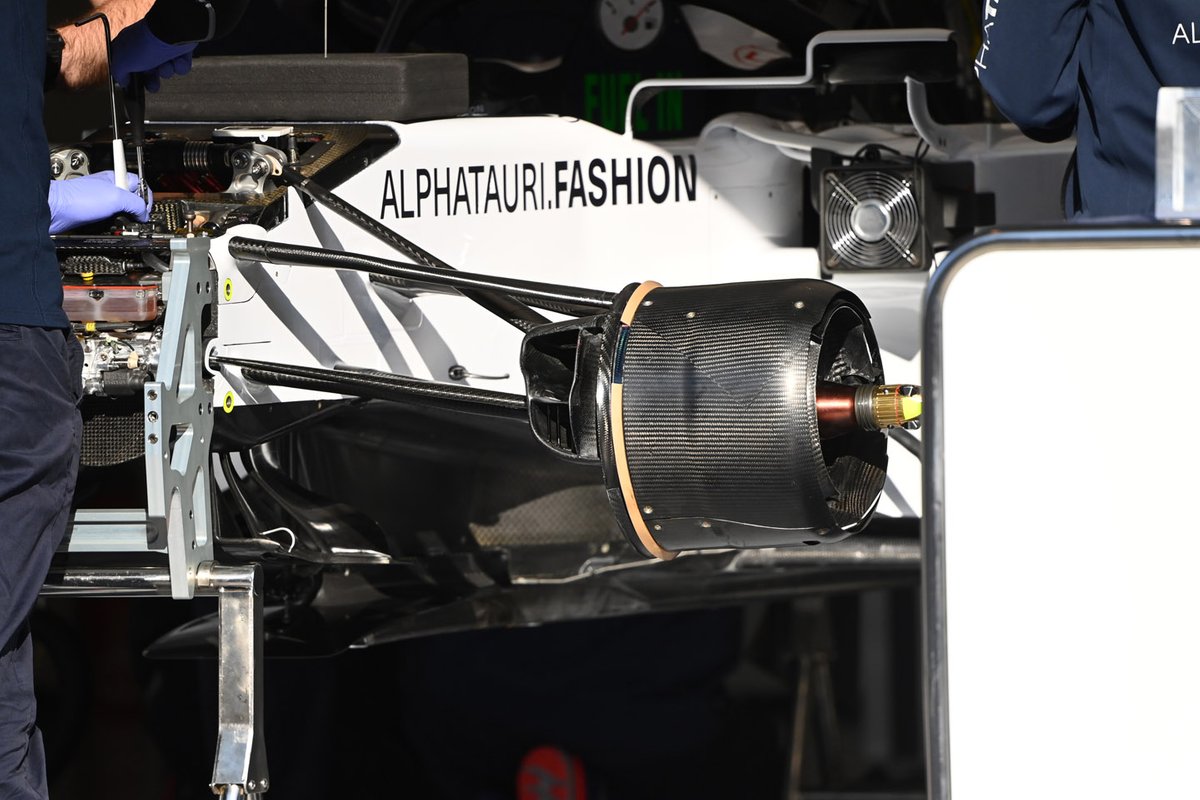 Here’s the front brake assembly on the AT01 with the brake drum installed, as we can see the cowl now helps to form a duct in order that the airflow being transported through the assembly and out of the wheel face is also directed more effectively.
Renault F1 Team R.S.20 side detail 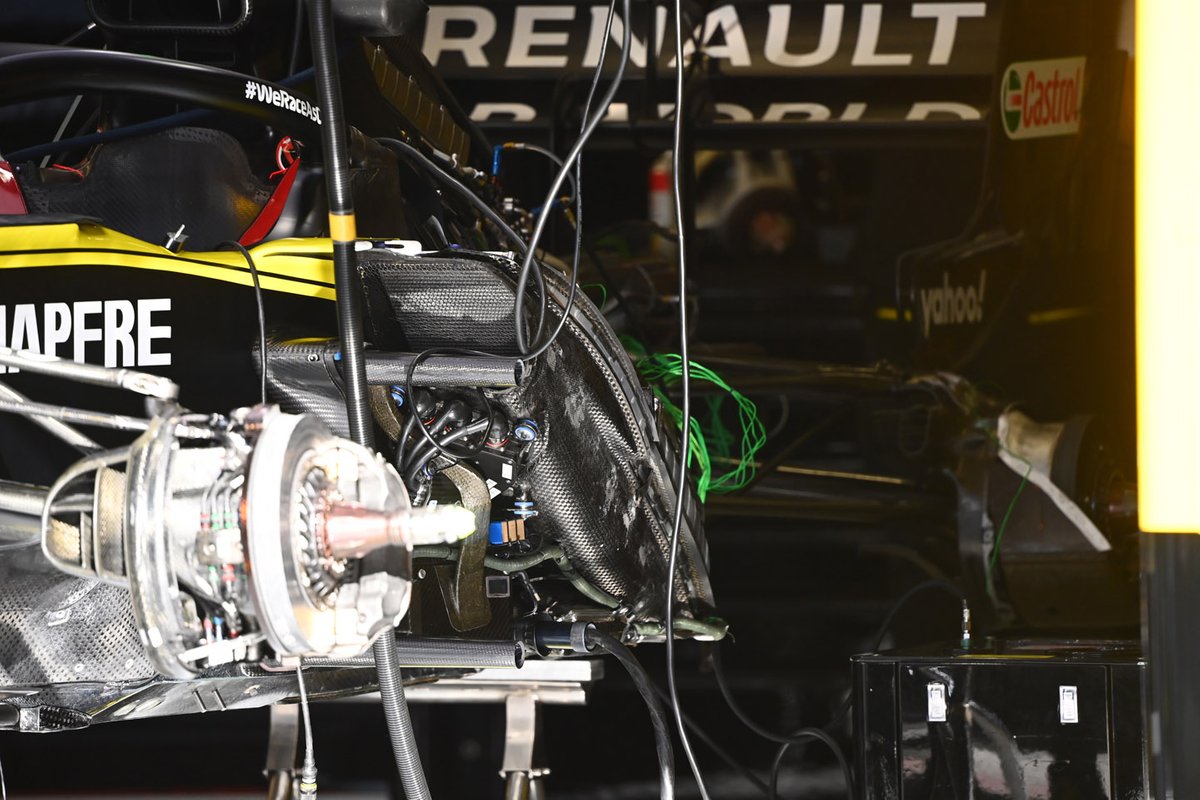 No bodywork on the Renault RS20’s sidepods allows us to see how the electronics and radiators are packaged. Note how having the upper-impact spar mounted in a lower position clears a pathway for the airflow to make its way into the sidepod inlet. Note the wire mesh that’s been installed in front of the radiator to prevent larger lumps of molten tyre debris being able to attach to the radiator, which would reduce performance.
McLaren MCL35 front detail 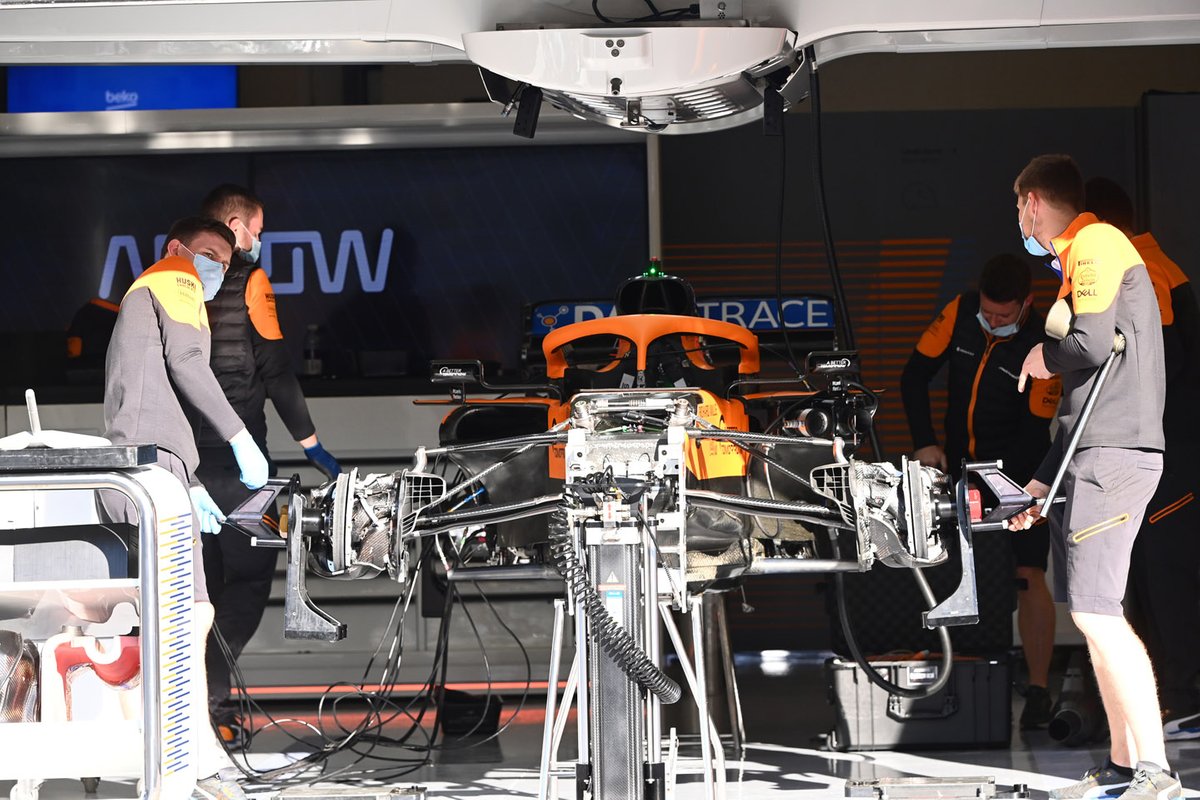 The McLaren MCL35 during construction - note the exposed inboard suspension elements, such as the heave damper, whilst we can see quite clearly the channels within the brake assembly that carry cool air from the inlet to the brake calipers.
McLaren MCL35 front brake detail 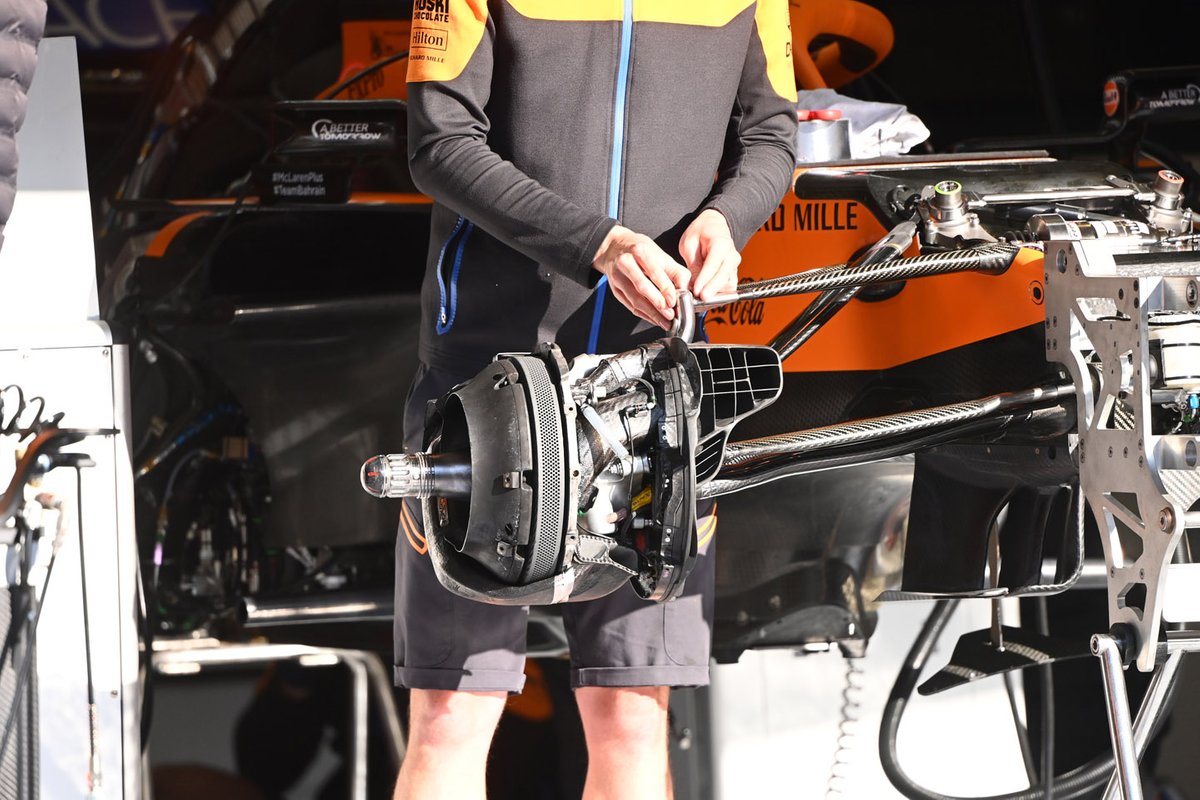 A close up of the MCL35’s front brake assembly whilst still under construction shows us how the airflow is fed through two channels to cool the caliper.
McLaren MCL35 front brake detail 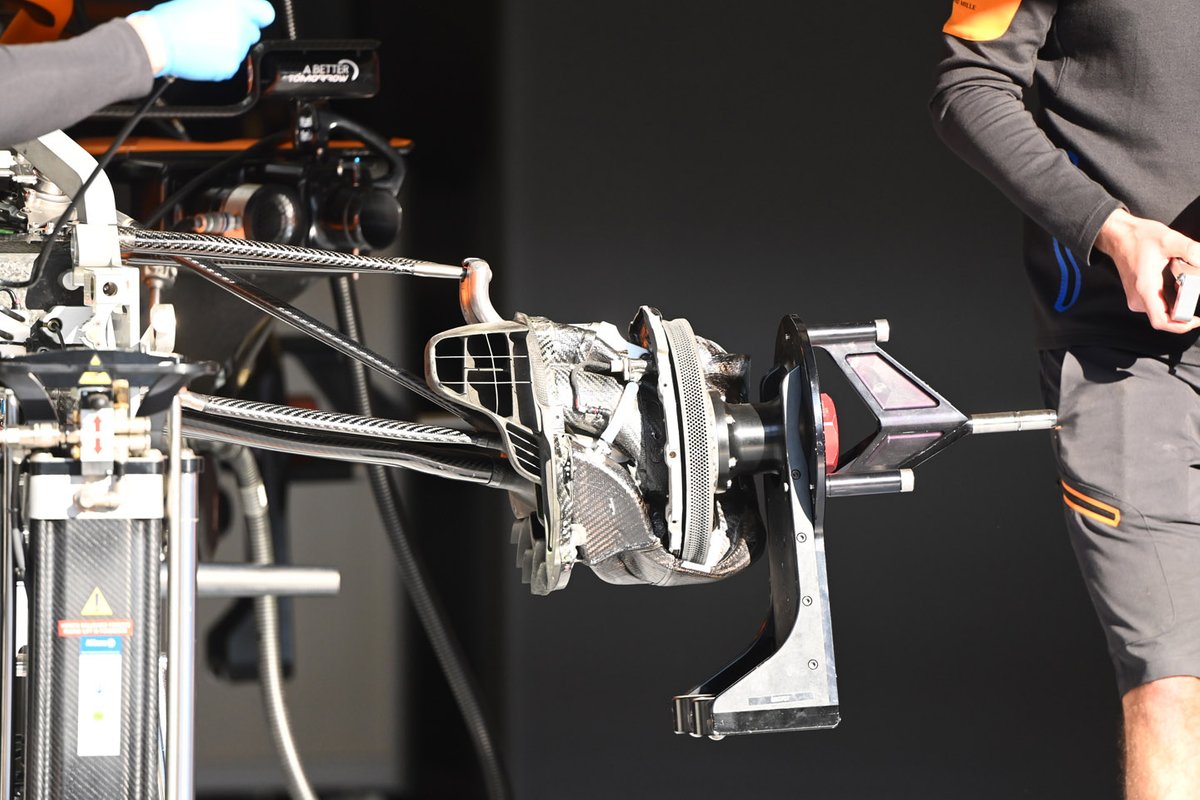 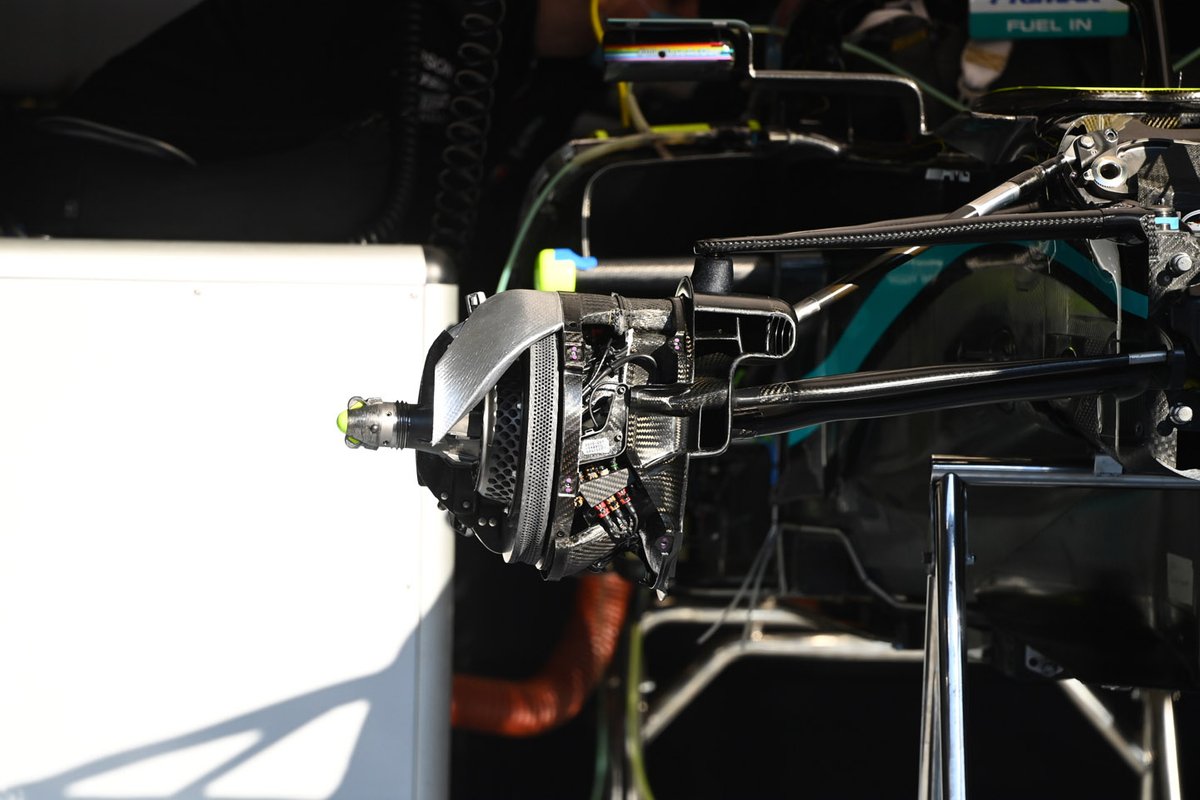 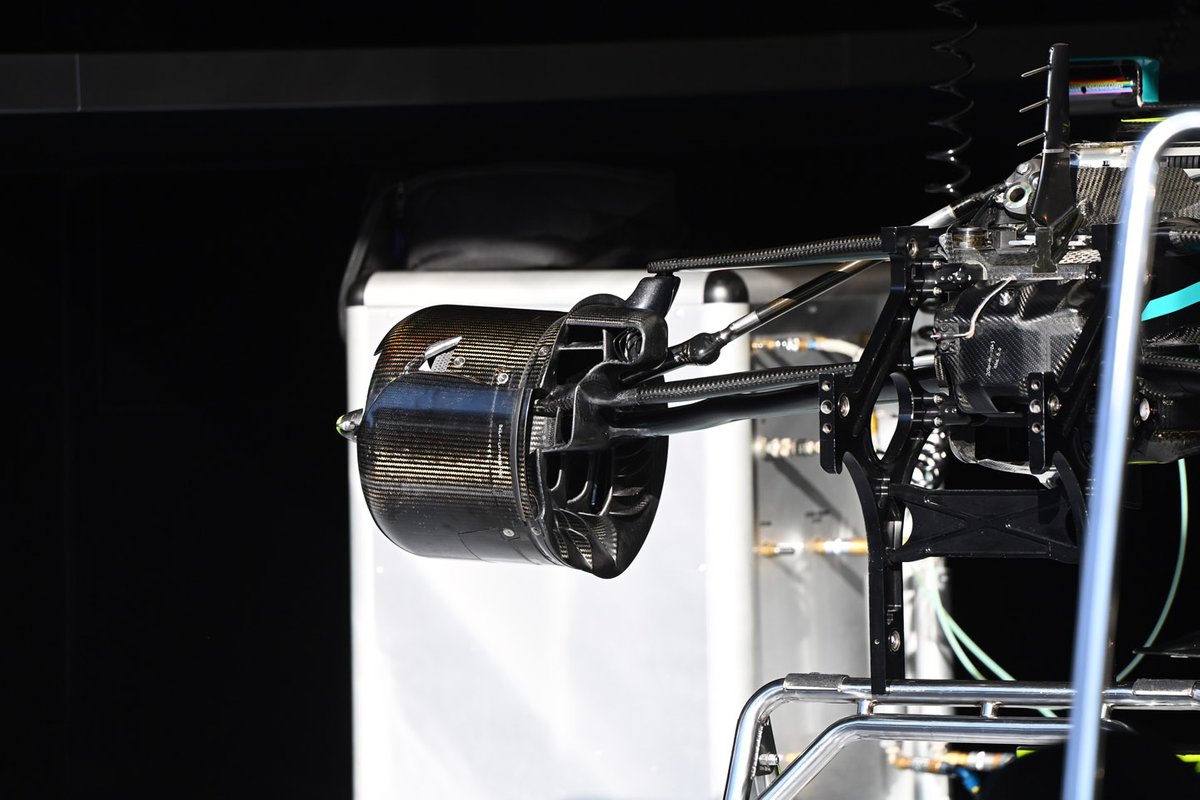 Here’s the assembly with the brake drum installed, note how Mercedes not only has the large L-shaped air scoop but also three smaller scoops beneath.
Ferrari SF1000 front brake detail 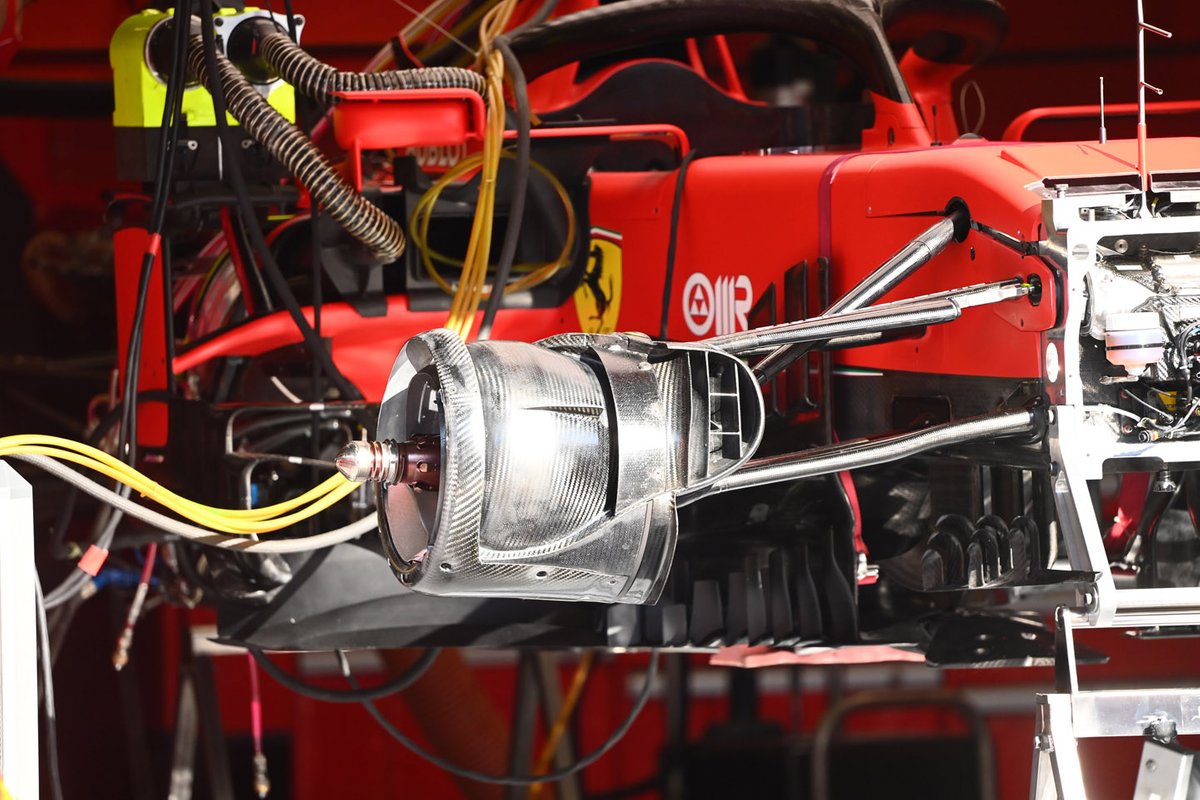 Ferrari has reverted to its hooped brake duct spec used since the start of the season, rather than the more enclosed one tested at the last few races.
Alfa Romeo Racing C39 front brake detail 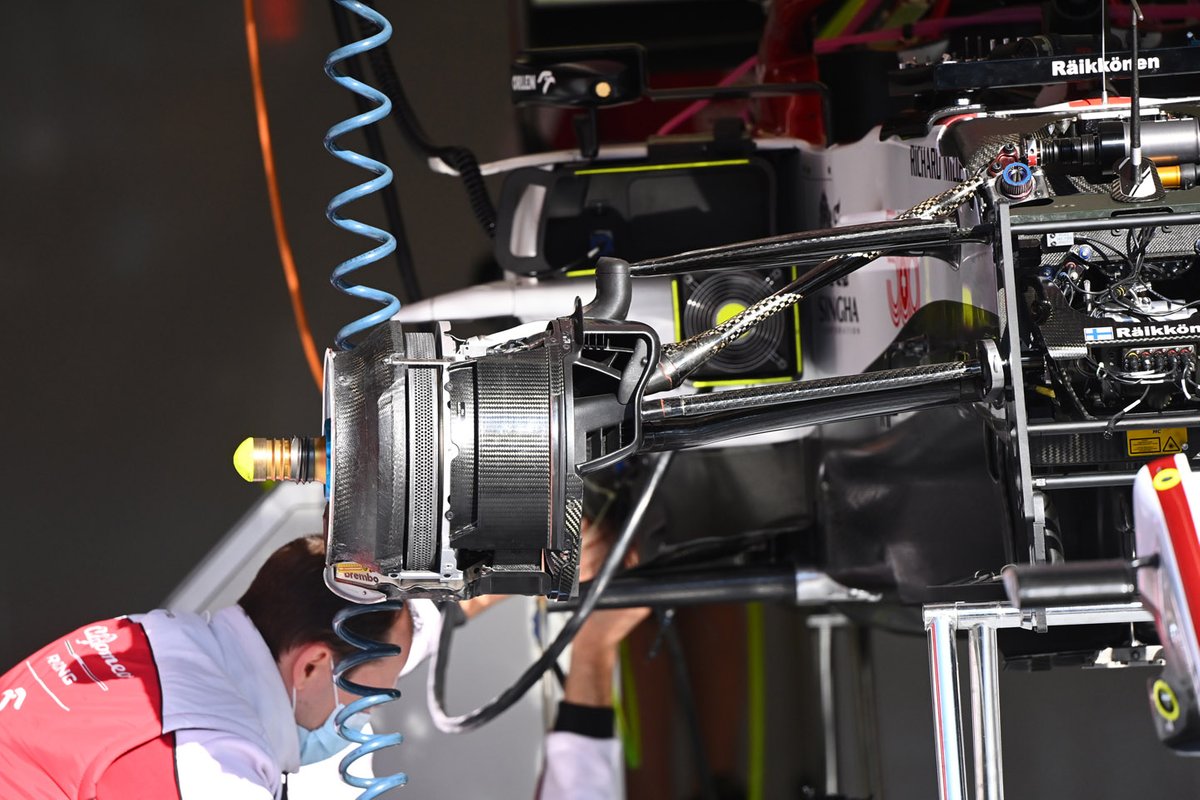 Alfa Romeo’s front brake inlet has some interesting features to help divert and capture the airflow and deliver it to the various components within, allowing it to not only keep things cool but also acting as an aerodynamic tool.
Alfa Romeo Racing C39 front wing detail 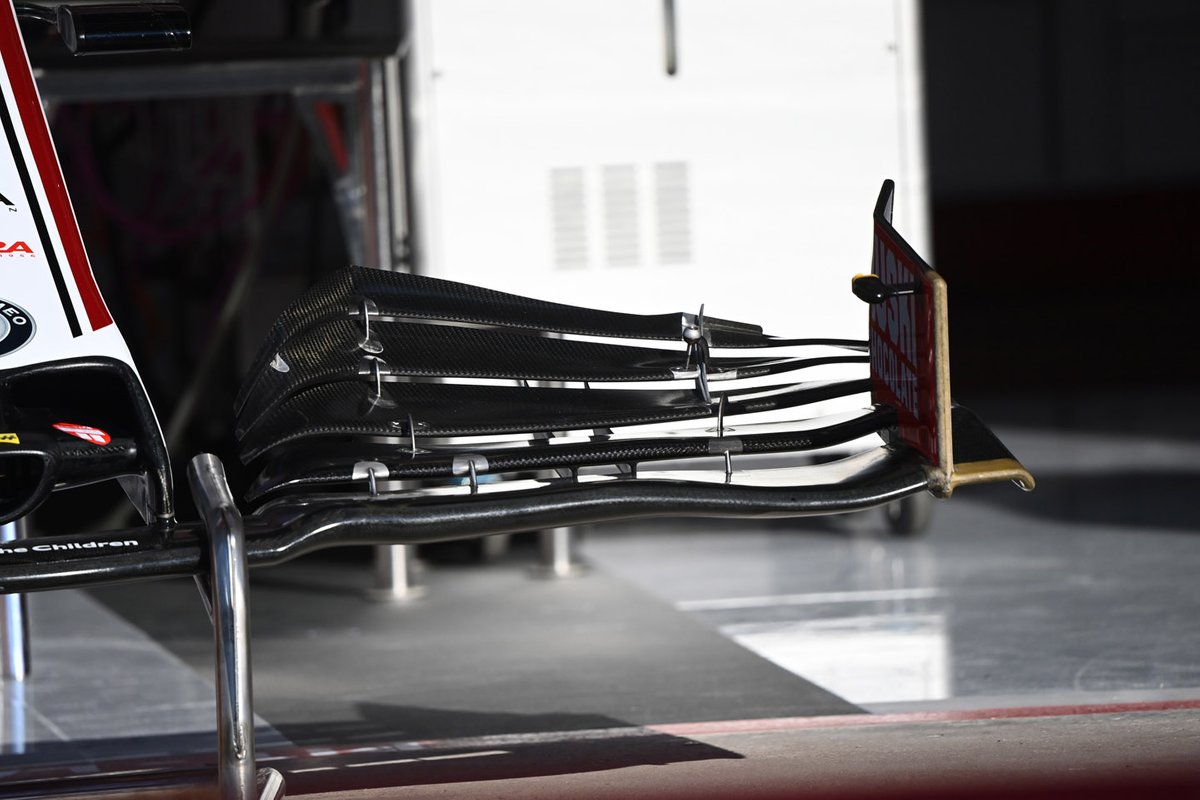 Alfa has not moved away from the unloaded front wing design introduced in 2019 but the upper flaps have been developed throughout. Note how it uses a small Gurney section on the trailing edge of the flap behind the adjuster to really define the two sections.
Alfa Romeo C39 diffuser detail 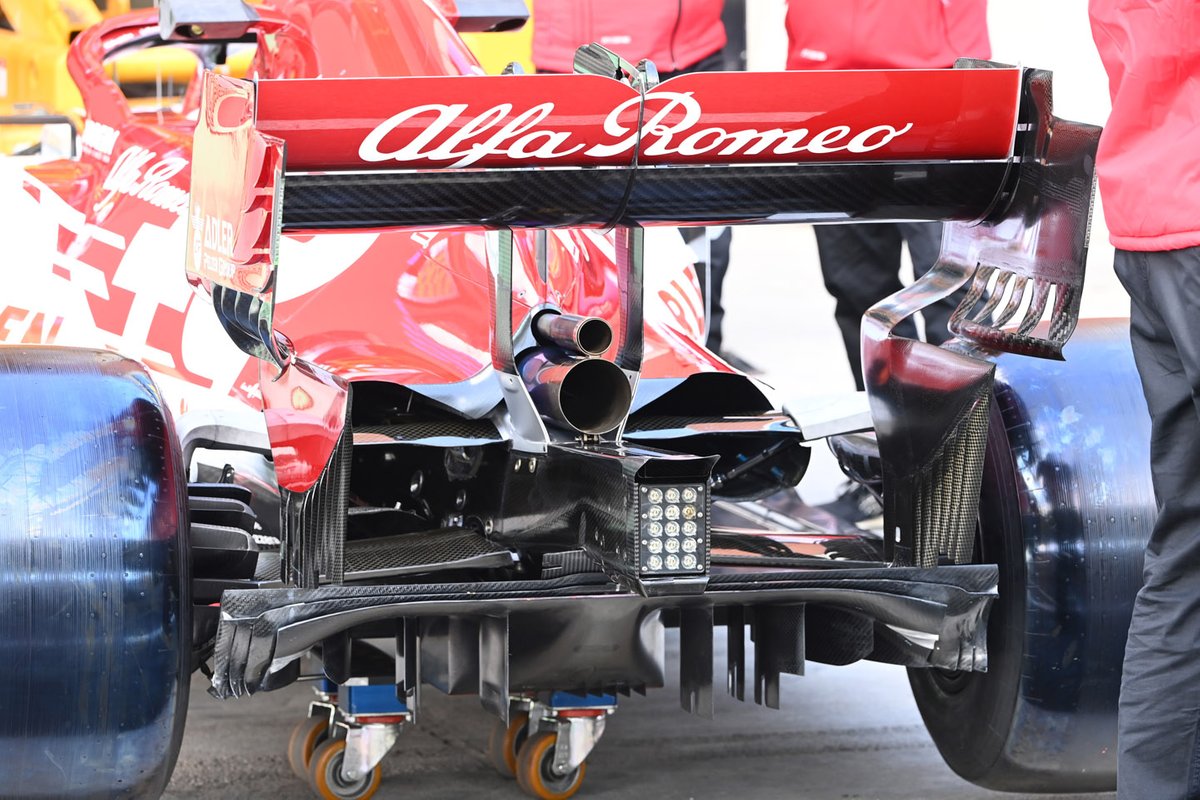 The outlet above the rain light is always a noteworthy feature to bear in mind, as is the duckbill flap above it. Meanwhile, the Gurney-like flap beneath the crash structure also has an interesting horizontal slot in it too that only goes as far as where the perforated Gurney below starts to change shape.
McLaren MCL35 diffuser detail 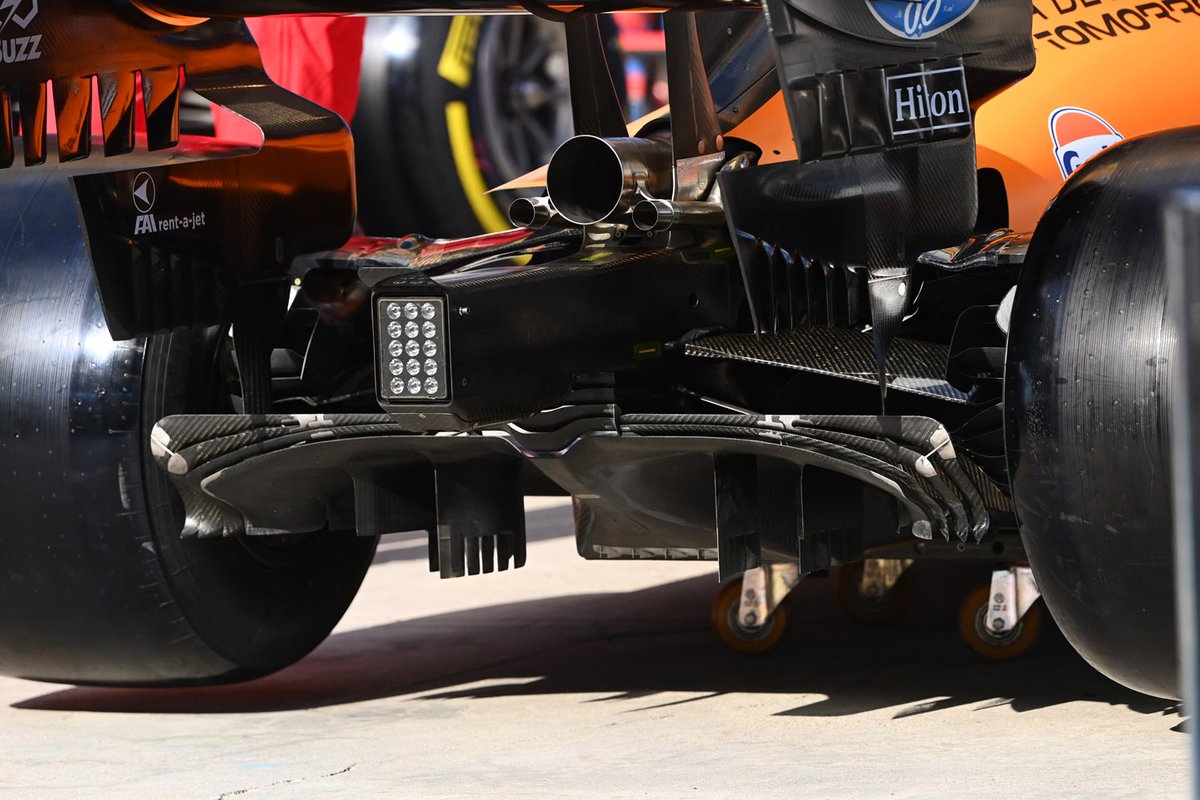 McLaren’s diffuser is still pretty different to everyone else's in the central portion, with the ramp section tapering in more tightly than all the other teams.
Red Bull Racing RB16 rear brake detail 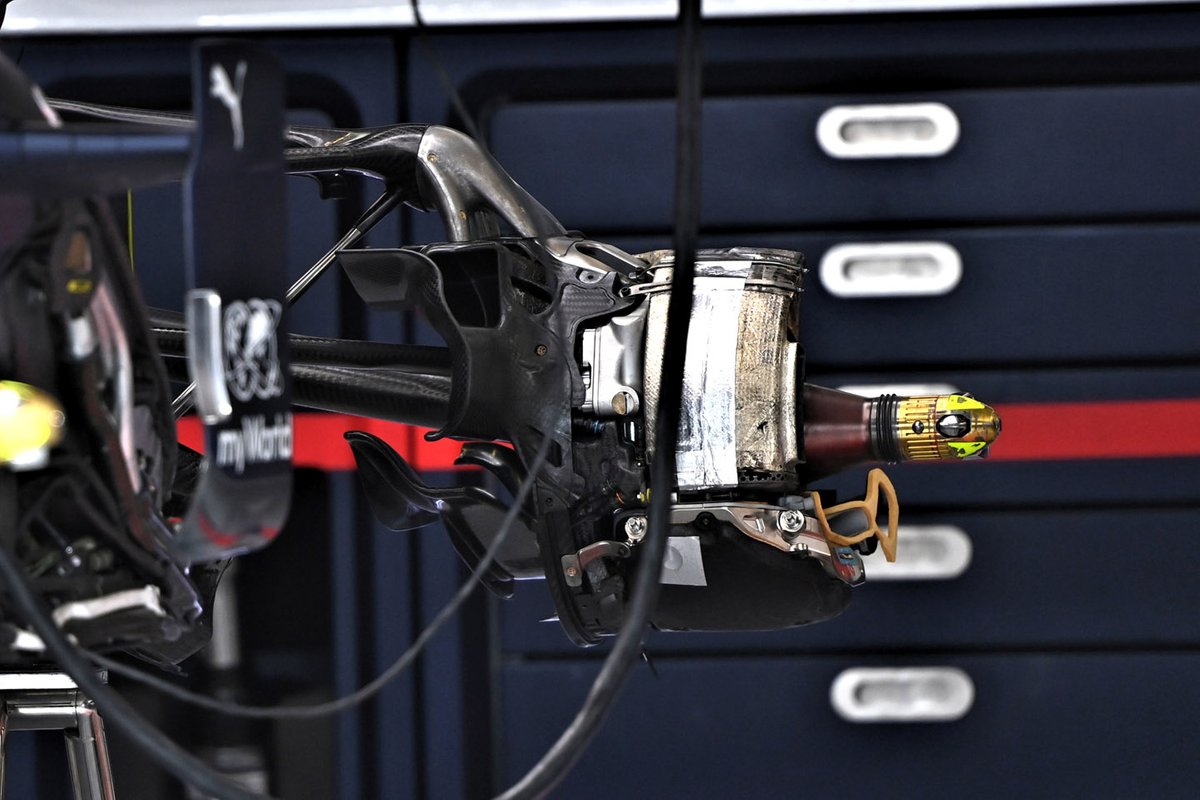 Red Bull’s rear suspension and brake assembly, which as you’ll note has the inlet in the upright section that was introduced a few races ago.
Racing Point RP20 detail 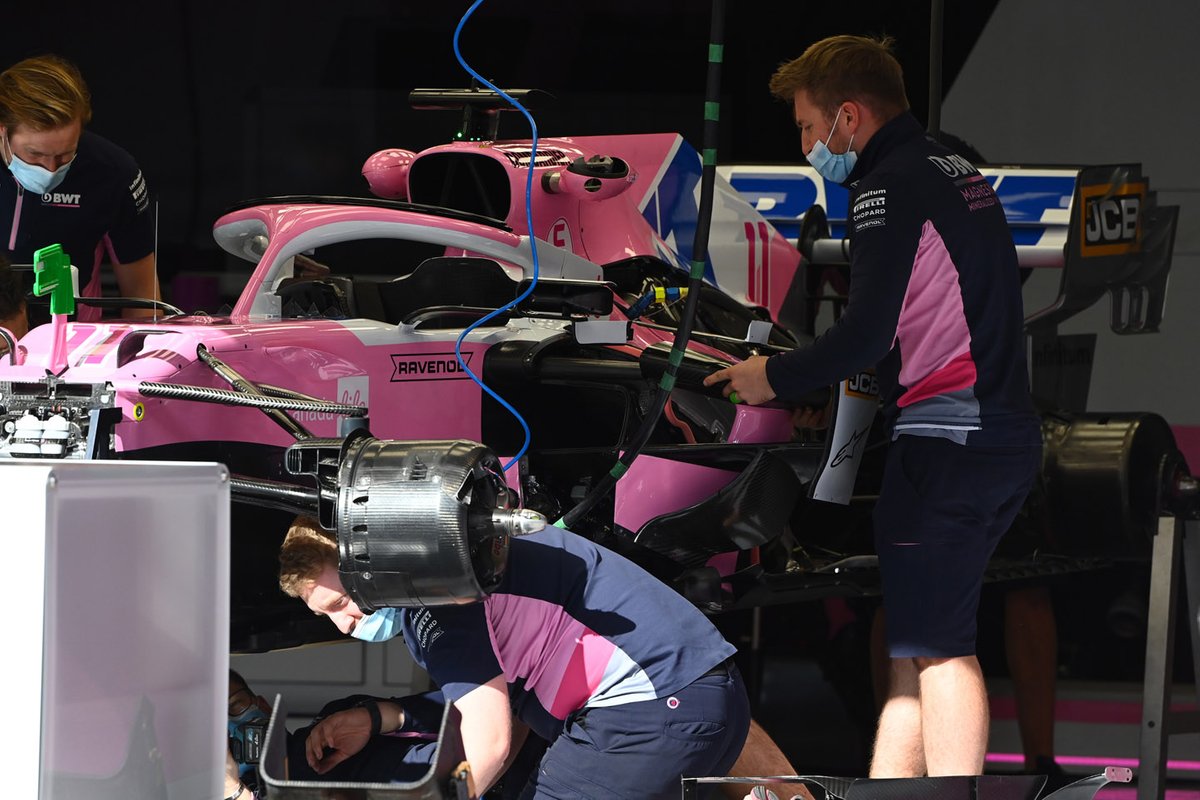 An interesting shot here, as it shows how the sidepod bodywork fits over the side impact spar. Racing Point is now the only team on the grid to have its spar in the higher position.
Williams FW43 front brake detail 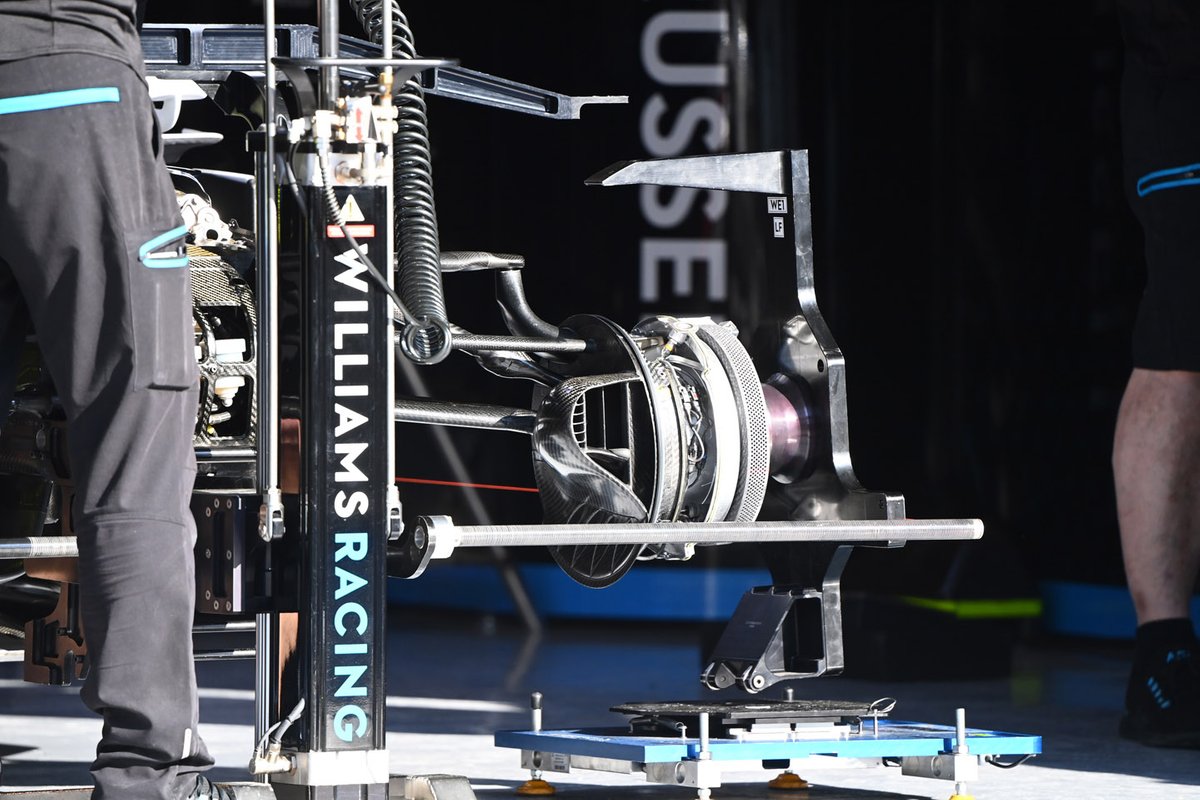 The front brake duct on the Williams FW43 - note how the lower section of the brake fence is indented to allow for the fins.
Williams FW43 rear brake detail 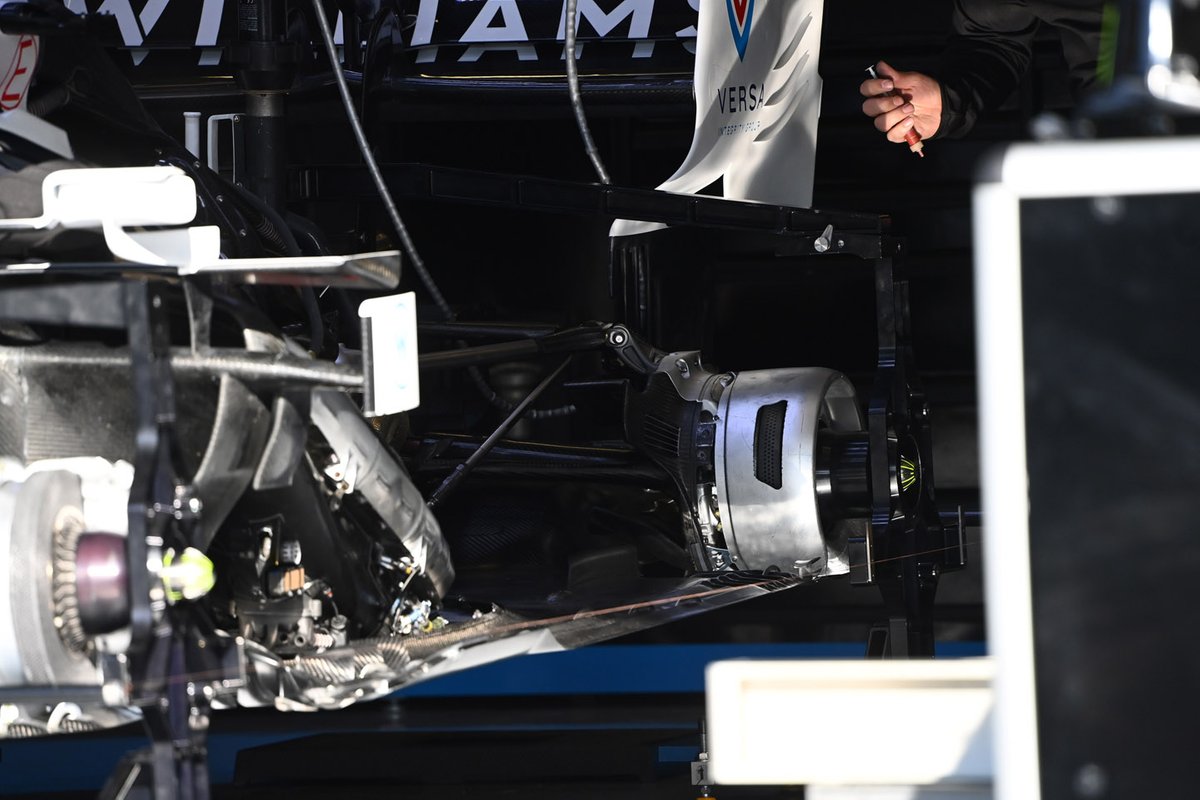 At the rear of the Williams FW43 we can see the inlet that the team has carved into the brake fence in order that airflow is captured in the air gap between it and the tyre.
Racing Point RP20 sidepods detail 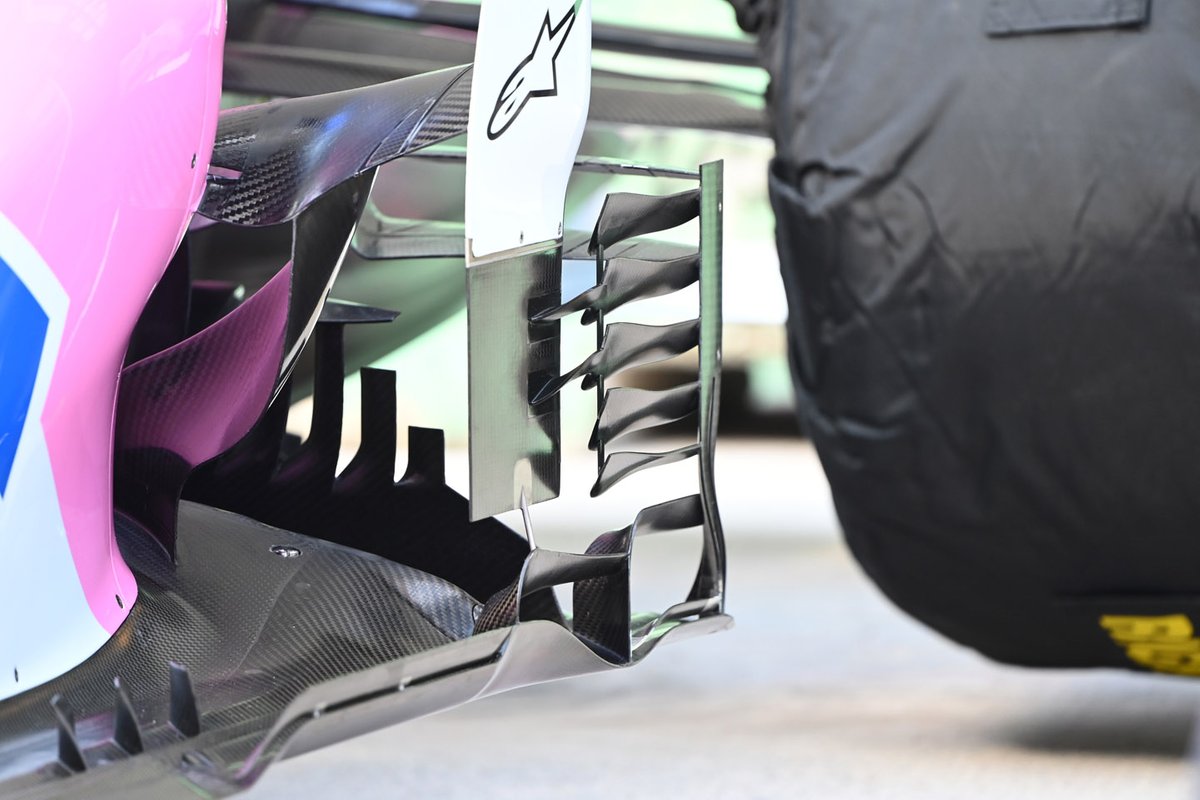 A close up of Racing Point’s deflector panel – the Venetian-blind section has a very specific shape in order to alter the direction of the airflow as it travels by.
Racing Point RP20 floor detail 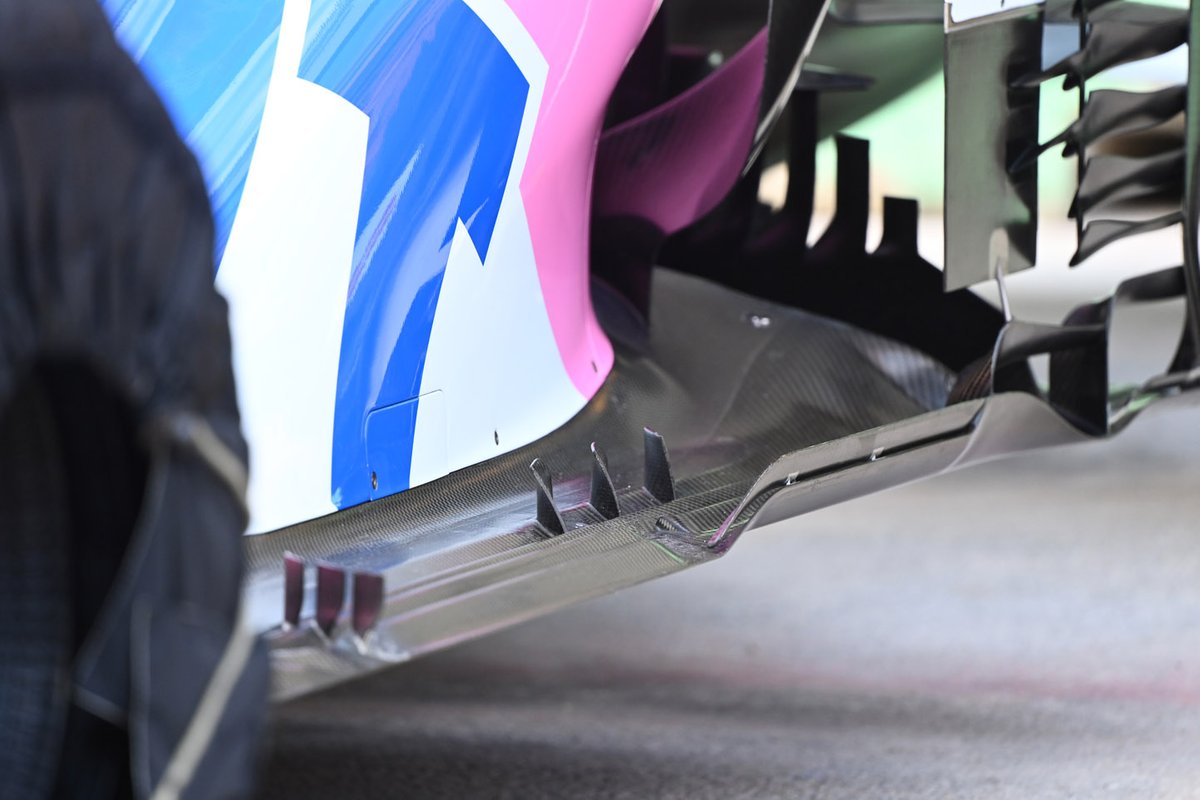 Here are the three fins mounted in the centre of the RP20’s floor and empower the slots that they reside upon.

Brazilian GP set to remain at Interlagos until 2025

Leclerc: Ferrari's struggles have made me a better driver