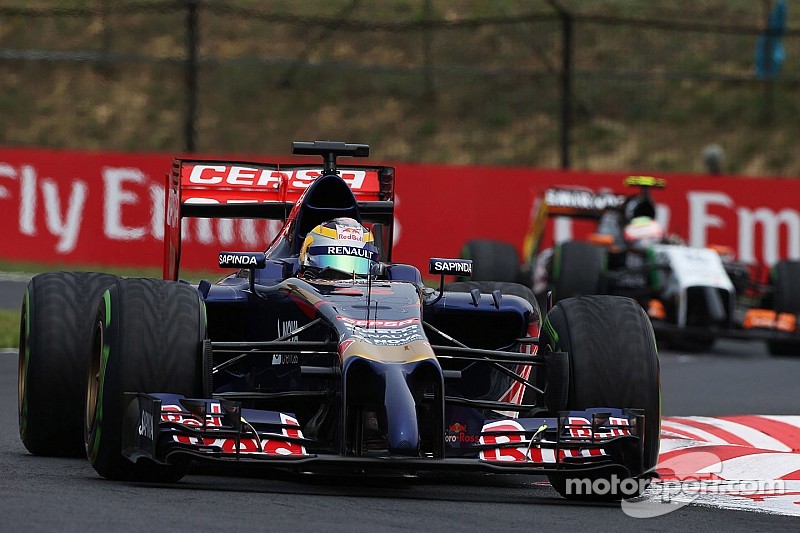 Jean-Eric Vergne: "I'm really positive for the second part of the season."

Jean-Eric Vergne (Position: 9th): “I'm very pleased with the weekend, I think it was a good one. As for the race, the team did a fantastic job to call me in straight after the safety car and everything worked well. The race was really nice and I had a lot of fun being in second position for some time. I knew that I didn't have the pace to keep up with the others around me until the end of the race but it was a great moment. Obviously I would have liked to finish in a better position to get more points but we still have to improve the performance level of the car. I'm confident that step by step this will come soon, so I'm really positive for the second part of the season."

Daniil Kvyat (Position: 14th): “This was a very tough race. I’m not sure what happened at the start, it has never happened to me before. The engine just stalled and so I was forced to start from the pit lane. The first half of the race was not too bad, I tried to catch up but overtaking was difficult and I had a hard time looking after the tyres, especially being stuck behind the other cars. It’s a shame we couldn’t finish the first half of the season on a high note, but I’m sure we can turn things around and come back stronger at the next race.”

Franz Tost (Team Principal): “We showed a very good performance in the Qualifying, starting the race with Jev from eighth and Daniil from tenth position. Jev showed a fantastic race under wet conditions, but also in the drying off circumstances, when he was second behind Alonso showing Rosberg, Vettel and Hamilton the back of the car. It was clear that under a full dry track we can’t keep this position. At the end we scored points again which is quite positive. Daniil’s engine stalled at the start. We have never faced this before. We will investigate the reason for this to prevent it in the future. Taking into consideration that Daniil had to start from the pit lane he showed a good race. Thanks to the team which did a good job during the entire weekend, and congratulations to Red Bull and Daniel Ricciardo for the fantastic victory.”

Ricardo Penteado (Renault Sport F1 track support leader): “Both cars crossed the line with all the Power Unit parameters on the green side and energy management was good, considering the evolving conditions. JEV showed incredible form on the changing track and in fact deserved to score more points. Daniil’s race was unfortunately compromised at the start when the engine stalled – we are still investigating why this occurred. Congratulations to our sister team Red Bull and to Daniel on a great victory today.”

"I was very, very shocked that the team would ask me to do that" - Lewis Hamilton