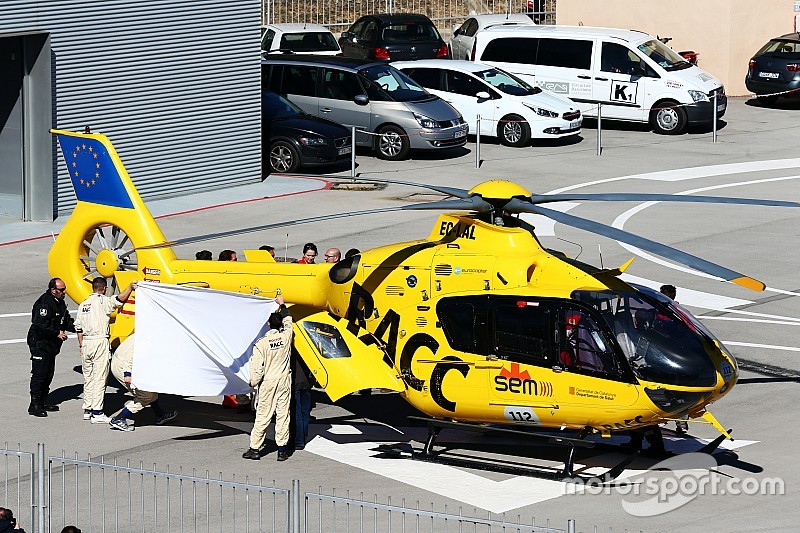 It was the day Formula 1's conspiracy theorists hit the jackpot: Fernando Alonso crashes his McLaren against the inside concrete wall at Turn 3 of Barcelona's Circuit de Catalunya in pre-season testing. He doesn't get out of the car.

An ambulance is summoned, he is extracted from the car by marshals and medics, transported to the circuit's medical centre and then airlifted to hospital, where he would remain in Intensive Care for a couple of nights.

The team declines to comment without hard facts, a spokesperson stating only: "He is fine, that's all I can say."

This creates a news vacuum that is filled with wild speculation: he was electrocuted by the ERS; he blacked out following some kind of epileptic-like seizure; toxic battery fumes overpowered him; he was over-sedated by the medics and now believed he was 10-years old; aliens were somehow involved…

Motorsport.com's Franco Nugnes takes photos at the crash scene that show some odd tyre marks that are clearly inconsistent with a 'normal' spin. A fan video is posted of the end portion of the crash, where the car appears to coast to a halt as it bounces against the wall.

Gone with the wind

McLaren then makes a statement: "Our findings indicate that the accident was caused by the unpredictably gusty winds at that part of the circuit at that time… We can categorically state that there is no evidence that indicates that Fernando's car suffered mechanical failure of any kind."

With no word from the hospitalised Alonso himself, reports – including an account from a photographer who claimed Alonso's head was "bent to the side" before he went off – served only to muddy the water.
The FIA even becomes involved, insisting that is kept informed of the findings of the crash so the F1 "community can learn from it".

Due to the lack of facts, the story ran and ran for over a month.

So what really happened?

The recuperating Alonso missed the first race in Melbourne, replaced by Kevin Magnussen. So the first time we actually hear from him is the pre-Malaysia press conference…

"Everything was more or less a normal concussion," he revealed. "I went to hospital in good conditions.
"There was a time I don't remember in hospital, from 2 o'clock to 6 – something like that – as I was sedated to travel in the helicopter, then everything was normal.

"I didn't wake up in '95, speaking Italian, or anything like that. I remember the accident and I remember everything the following day."

As the conspiracy theorists sighed, the best was yet to come as he totally discounted the team's "gust of wind" theory and totally blamed a mechanical issue for causing the crash.

"It was clear there was a problem in the car, but it was not found in the data," he said. "There is not a clear answer. Definitely we had a steering problem in Turn 3, and it lock to the right.

"I downshifted from fifth to third. Unfortunately, in the data we still miss some parts. The data is not there, not at the top.

"Whatever part was the problem, perhaps we'll never find out."

Vergne respects being turned down by Haas F1