One of the most popular drivers in Formula One had another interesting year, finding his way into the headlines more than once this season.

It all started off with a win in Australia for Kimi Raikkonen. The flying Finn drove his Lotus from the seventh starting position. The win tied him with countryman Mika Hakkinen.

The next major news that Raikkonen made was his rumored talks with Ferrari, the team he departed from in 2009, being replaced by Fernando Alonso despite having a contract that ran through that season.

While most silly season rumors remain just that, rumors, many never thought the 2007 Formula One Champion would go back to the team.

Then, on September 11 the Iceman broke silence, announcing that he had signed a two-year deal with the Prancing Horse. 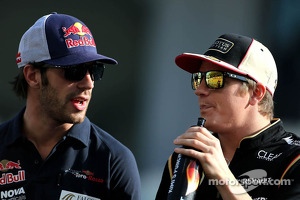 But his time in the headlines wasn’t over. Instead of simply taking the new contract and waiting out the year, Raikkonen released that some of his reasonings for leaving the team was due to monetary difficulties with the team.

Reports soon started leaking that he had not been paid by Lotus for any of his services that season. The team came back with the fact that its ailing budgets were hoping to be offset by a deal with Quantum Motorsports, ensuring the driver stuck around for the remainder of the season.

Despite the optimism within the team, Raikkonen booked a surgery required for his back and would miss the final two grand prix of the season.

“The reason why I left the team is really on the money side. The team said they haven't got my salary. It's an unfortunate thing," Raikkonen said.

"I like to race. That's the only reason why I'm here, it doesn't matter which team it is."

Red Bull Racing: How to make an F1 car - video