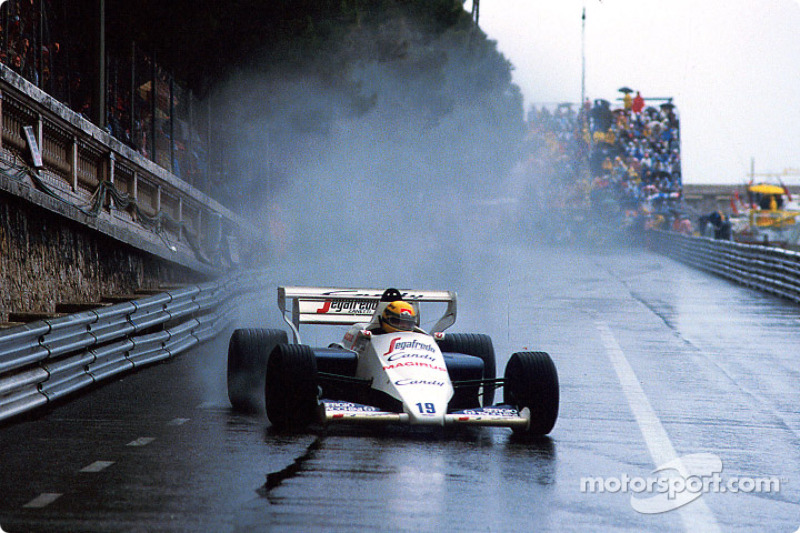 Ayrton Senna did a lot of remarkable things in his legendary Formula One career, but none could match what Motorsport.com chose as his No. 1 performance.

Ayrton Senna is arguably the greatest Formula One driver that ever lived. On this weekend, 20 years ago, we lost this icon to a tragic crash on May 1st, 1994, in Imola. Motorsport.com compiles what we believe are Ayrton Senna's seven best drives ... and there were a lot of moments to choose from.

10. Pushing harder when most would give up

In the crash that left Martin Donnelly seriously injured, Ayrton Senna was seen watching the crash in horror from pit road. Immediately after the accident, Senna went back out on track and went even faster. He already had the pole in hand, but he wanted to make a statement. He wanted to get back in the car, not let the incident rattle him, and that's exactly what he did.

Maybe it's not his greatest moment, but it is certainly memorable. After the events of this race in 1989, Senna was not about to bow in the face of political games once again. He was on pole, yet given the dirty side of the track. He went into the first corner and never lifted. He and rival Alain Prost crashed, handing Senna the World Championship ... and his revenge.

8. A farewell gift to McLaren

In his final race with the team he won all his titles with, Senna provided a goodbye gift to his friends at McLaren. He won the race and defeated the Williams, which were far superior at the time. It would be his final podium before his tragic death at Imola in 1994.

Ayrton Senna put on a clinic en route to his first F1 win in the 1985 Portuguese Grand Prix. In just his second race with Lotus, he lapped the entire field with the exception of Michele Alboreto, who was a distant 63 seconds back.

In just his fifth career start, Ayrton Senna made his presence known in treacherous conditions during the Monaco GP. In the inferior Toleman, he drove up through the field and was catching race leader Alain Prost at an extraordinary pace. Just as he was getting within reach for a possible overtake though, the race was red flagged and ended by the stewards.

5. A start to remember

The Williams drivers had superior cars to the McLaren guys in 1993, but as the old adage goes, rain is the great equalizer. Senna had an amazing start, slicing and and dicing his way through his adversaries and into the lead. He went on to win the race, lapping everyone but Damon Hill.

Ayrton Senna stalled on the start of the 1988 Japanese Grand Prix, dropping to 14th. With his first World Championship on the line, he started cutting his way back through the pack at an exceptional pace. Prost was no match for the hard-charging Senna who easily overtook him on his way to his first driver's title. It took Ayrton just 27 laps get to the top spot.

3. A drive tainted by what happened after the checkered flag flew

In the 1989 Japanese Grand Prix, Ayrton Senna was searching for his second consecutive title but needed to beat Alain Prost and win the race. If Senna did not finish, Prost would all-but secure the World Championship. The two teammates dueled for many laps before Senna made his move, but the two crashed. Prost was out, but Senna refused to give up. With a broken wing, he nursed the car back to the pits. He then drove like a man possessed, winning the race after passing Alessandro Nannini late in the going. Senna was later stripped of the win do a nasty little thing called politics.

Of all the races Senna won, his home Grand Prix always seemed to allude him. In 1991, he would finally have his chance but the win did not come easy. It started to pour at the end of the race and Ayrton only had sixth gear to work with. He somehow held on and finally became a winner of the Brazilian GP. After the race, he suffered back and neck spasms and needed assistance from the safety crews.

1. Man becoming one with machine

In what is widely believed to be the most incredible lap in Formula One history, Ayrton Senna stopped driving his McLaren. He became his McLaren. He stopped thinking. He drove the car based only on instinct and obliterated the competition in qualifying. He was half a second quicker, then a full second, then 1.5 seconds. He later stated that he never reached that level of focus and intensity ever again. The chilling video...

Safety in Formula One and NASCAR - There's always room for improvement

Lotus worth watching in Barcelona