The upgrades that Haas hopes can turn its season 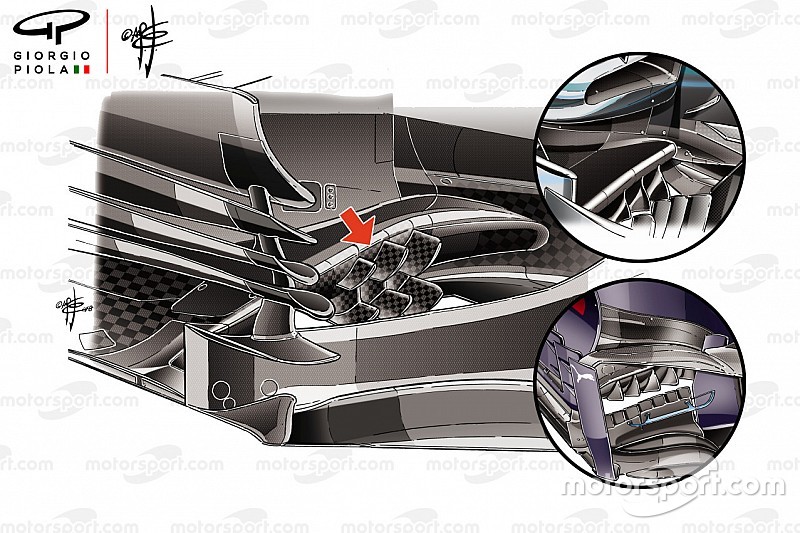 A combination of mistakes and misfortune have served to blight Haas’ Formula 1 season, and left it unable to deliver the kind of points that the pace of its car would suggest were possible.

But while a change of circumstance would certainly be welcome to lift it from seventh in the constructors’ championship, the team knows full well that it must not sit back and stop worrying about improving its chassis.

That is why in Canada it introduced the second phase of a hefty update that it believes can form the basis of an uplift in results.

The update is not only about directly improving aerodynamic performance, but also in ensuring that parts can make it through a race weekend unscathed - as the team has had its share of troubles with parts coming loose.

The team was actually forced to sacrifice performance in Monaco, as the FIA requested it remove some elements from its bargeboards, given that the parts had failed whilst on track in previous races. No risks were wanted in case bodywork flew off around the tight streets of Monte Carlo. 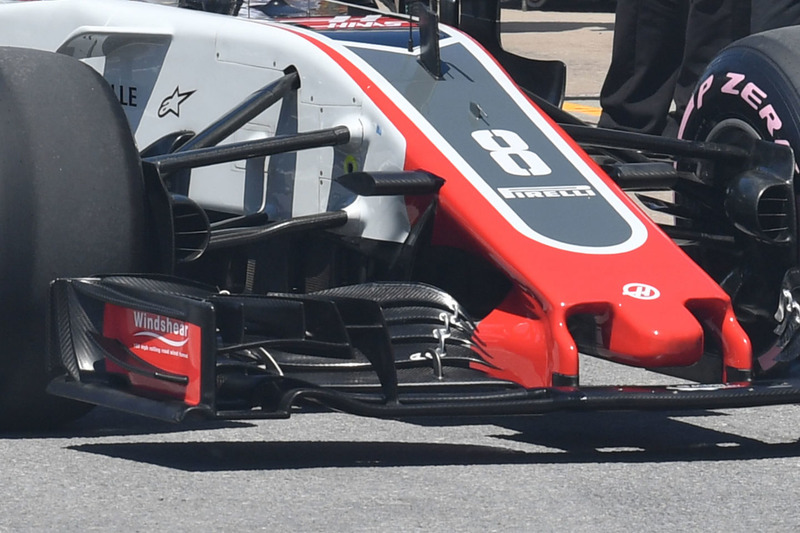 As a precursor to the large scale Canada update, the team introduced a new front wing and halo fairing in Monaco, having tested both at the test after the Spanish GP.

Only Grosjean fielded the wing in Monaco but the new part made its way on to Magnussen's car in Canada too.

The front wing's triangular end plate topper has been displaced in the update, altering how the airflow moves around the surfaces.

The mainplane and subsequent flaps arcs have also been amended, as the aerodynamicists do their best to adapt to the revised tyre behaviour for 2018, mitigating the turbulence created and improving performance downstream.

The flap frequency was also amended, with four upper flaps now occupying the same space that three could previously be found in.

The camera pods on the side of the nose are now mounted on extensions too, moving them away from its surface to allow the airflow to move more freely. 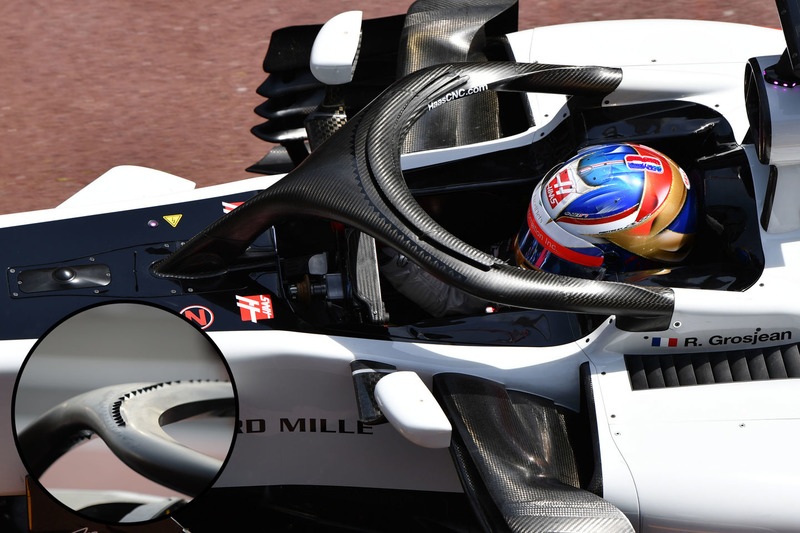 The halo fairing used by Haas in the opening five events featured a row of vortex generators atop it (inset), as the designers looked to improve flow around the structure.

For Monaco the team had a new solution, utilizing a stack of winglets much like we've seen elsewhere up and down the grid.

You'll note that a serrated strip also lays ahead of the winglet stack, as the designers try to buffer the turbulence created on the structure's leading edge. 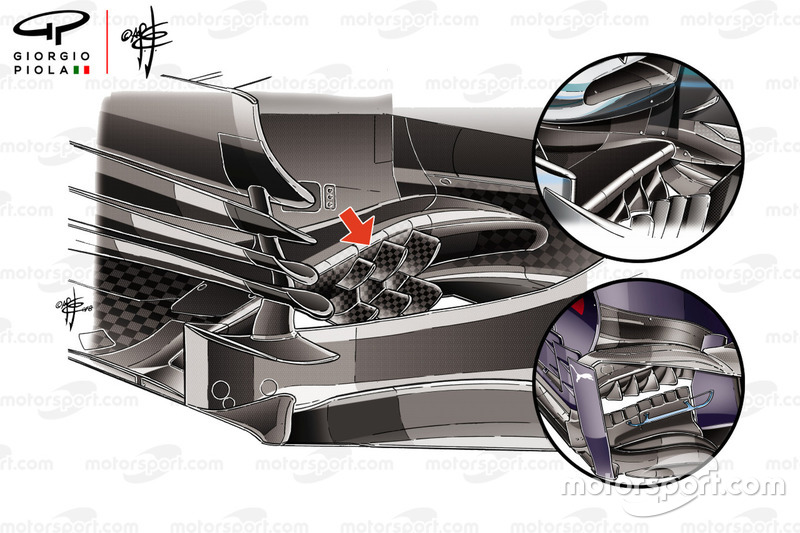 It's the car's midriff where most of the development action has taken place for Canada, as more furniture appears on the bargeboards in order to position the airflow more accurately.

On top of the serrated footplates, a series of vertical vanes of various sizes and shapes can be found (white arrow). These will work in harmony with one another, depending on the car's yaw angle, in order to improve flow around that region.

The leading element of the main bargeboard now arches over to meet the chassis (red arrow), creating a barrier for any airflow that may upwash too aggressively ahead of it.

The sidepod deflectors have been adjusted too, as the uppermost element has been merged with the slat that runs over and in front of the sidepod's leading edge (blue arrow).

This slat has also been pulled further forward, not only to engage the airflow sooner but also offering a means to disguise the strakes added to the leading edge of the floor.

By virtue of the slats' now more forward position, it's opened up the opportunity to mount the mirror stalk from it too, with a highly swept stalk being employed (black arrow). 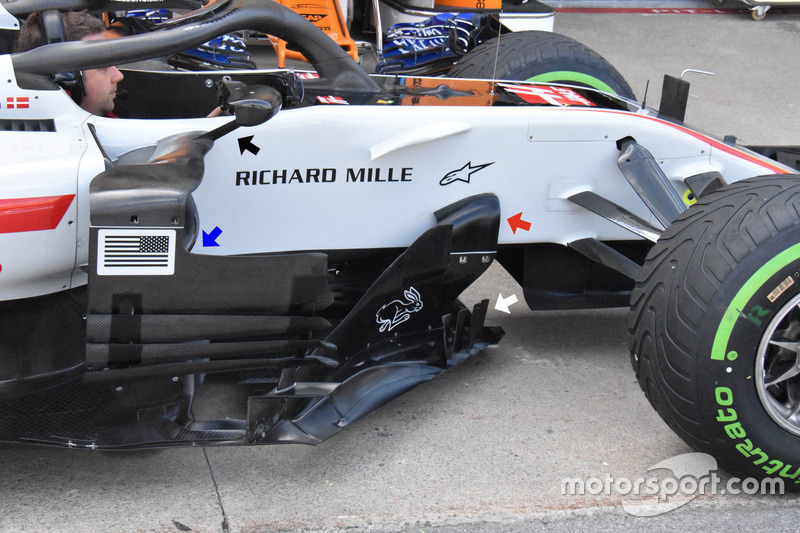 An idea first introduced by Mercedes and subsequently adopted by a large portion of the field is these strakes on the leading edge of the floor.

The regulations introduced in 2017 opened up the possibility of upturning the floor in this region, improving flow to the rear of the car.

However, the turbulence created by the tyre ahead had proved problematic and so teams have taken to using these strakes to clean up the flow and, with it, the potential of the diffuser.

The strakes used by Haas differ from the ones used by the majority of the grid as they're stacked on top of one another, rather than reaching right down to their termination point.

In comparison, Mercedes continue to use three strakes (upper right inset), as do many of the other teams that have subsequently copied the solution.

Meanwhile, Red Bull pushed the concept further in Spain when it introduced a floor that features six of these strakes to align the airflow (lower right inset). 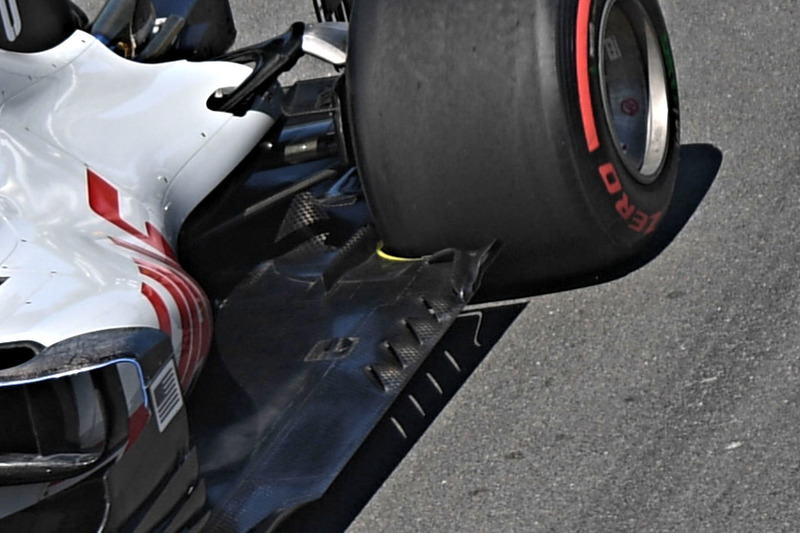 The area ahead of the rear tyre has also seen attention from the designers, as whilst the most rearward L-shaped enclosed hole and its accompanying floor flap appear relatively unchanged, the three fully enclosed holes ahead have been cast aside in favour of four shorter ones.

Why Alonso must race in IndyCar in 2019