Formula 1's newest outfit might not actually compete on track, but Paul Stoddart - the man behind it - has pulled out all the stops to ensure it feels like an authentic part of the paddock.

The push by Formula 1’s new owners Liberty Media to do more for fans came alive at the Spanish Grand Prix as a bigger entertainment programme, enhanced activities and a festival atmosphere helped produce a carnival-style event for those at the race.

But there was change afoot in the F1 paddock too. For as well as an open bar, a bigger buzz and that special F1-branded robot, a new unofficial 11th F1 team appeared at the far end of the pitlane.

In fact, were it not for the fact that its cars featured two seats, you could have been forgiven for thinking that this was actually a new entrant that had turned up – because the garage was fully specced up and it even had its own motorhome ready.

Instead, this two-seater set-up was one of the cornerstones of F1’s new efforts to bring the sport closer to the fans – with media, celebrities and even a few competition winners being lucky enough to try out the experience of a high-speed lap of the track.

In charge of F1's two-seater project is former Minardi F1 boss Paul Stoddart, who has kept running his cars ever since he sold to Red Bull in 2005.

But rather than the whole effort just being about a crazy 90 seconds on track, the new project is about recreating a full team experience – so there is a working garage, where guests can really get to understand better what F1 life is like.

"It's all about F1 experiences and it's all about bringing Formula 1 up close and personal to the people," Stoddart told Motorsport.com. "Let them see it, feel it, smell it. And for the really lucky ones, they even get to ride in it.

"But even the ones that don't ride, the excitement in that garage now, you see the smiles on people's faces.

"And even if they've not actually gone into the car, just being around the cars, being so close to a Formula 1 car, there are so many people around the world that just have dreamed about something like this and they don't ever get the chance. So what this is all about, is actually opening up Formula 1 a little bit. But not too much!" 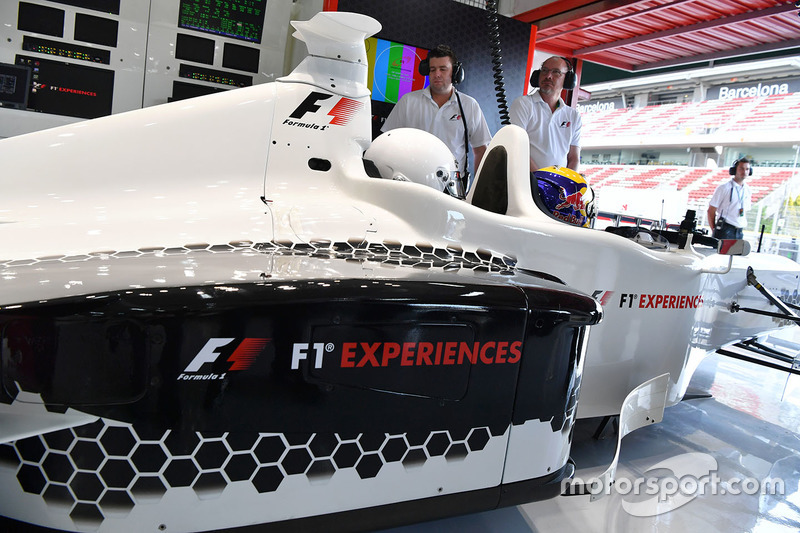 While Stoddart has his own two-seater cars, which have famously run at the Australian GP every year, other equipment needed to be sourced.

One of the ways that Stoddart was able to recreate the authentic F1 garage feel was through buying up many of the assets that the defunct Manor team had – so at least some of the spirit of the old outfit can continue.

"This is very much the Manor equipment from last year, so it belongs in this paddock," he said. "We've been running the cars for years, so there's nothing new in that.

"But what's new is having the advantage to actually show the product and show the experience and share the experience with people that would never ever, ever have had the chance to do something like this.

"A little down the road [later this year], not at this one because it was all done in pretty quick time, but we will be doing pitstop challenges. And you've seen out there the pitstop gantry. It's all a hundred percent today.

"It's not last year's or from 10 years ago. It's today's, so everything in that garage is ready and able and capable.

"We will have guests sitting and watching the race inside the garage. These are experiences that in previous times money couldn't buy. So we just bring it to the people." 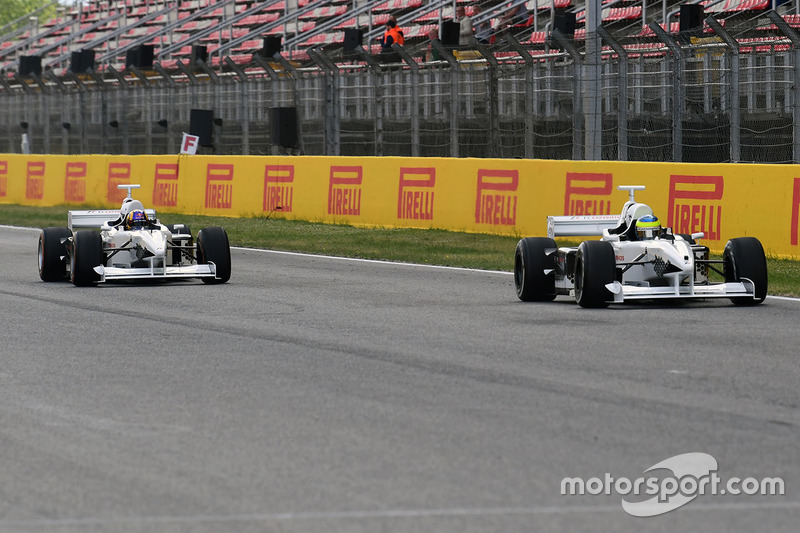 The idea of coming up with F1's 11th team was discussed briefly at Stoddart's home Australian GP, but a plan to put it into action only accelerated after the wet Friday in China – when limited track action because the medical helicopter couldn't fly left the sport facing fresh criticism.

"Originally when we discussed with Liberty in Australia about doing this, we were going to start in Austin," he said. "So we had many, many months to get prepared, because Austin being [in October] there was no pressure. There was no pressure at all.

"The cars could have come back from Australia, we would have months to prepare them and turn them around and do everything."

Stoddart had originally planned for the cars to return to the UK via sea freight, which would have meant them only getting back this week. But ahead of a meeting he had planned with Liberty in April, a sixth sense told him to switch to air freight

"I felt I needed to do this because otherwise I'm having a meeting and if they say 'We want to be in Barcelona', I can't do it. Physically, the cars would have been on the water. And so we changed it.

"That was on the Friday, we had the meeting on the Saturday, and they said: 'No, no Barcelona, we are not ready for it yet'.

"But then after the Chinese Grand Prix, when they had the problems on the Friday with not being able to run, I got a call to say: 'Can you be in Barcelona?' And I'm thinking: "That's three-and-a-half weeks before the trucks have to leave!'

"But I said: 'Yep, we'll do it.' And it's one of those moments you say 'yes' to something and then you think: 'Wow, are we really going to be able to do this?'" 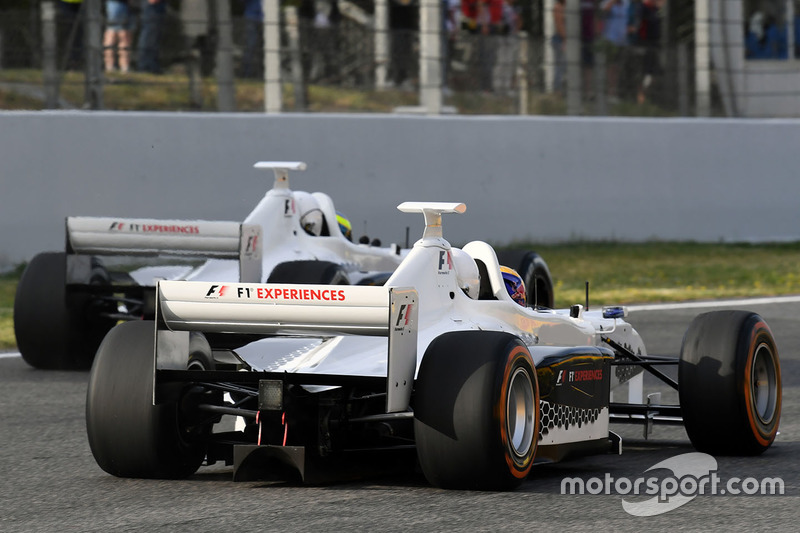 Stoddart had limited time to get things in order – but, having been an entrepreneur all his life, he pulled out all the stops to get things sorted.

He arranged with the auction company selling Manor's assets to get permission for early purchase of items he wanted – which happened over the Easter weekend.

Plans to sort out team clothing nearly came unstuck when the order got mixed up. A last-minute change of company, and the dispatching of trousers and polo shirts on a delayed plane, meant crew were trying on their uniform in the back of the paddock.

There was motorhome drama too: "We had a real expensive lesson here on the Thursday, when this motorhome went up. We just trusted the circuit power and when we got a rain storm on Thursday afternoon we got shorted out.

"Luckily we brought an electrician. We brought a lot more people then we normally have, because we wanted to cover every eventuality.

"And luckily I had two electricians and an assistant that were on our staff and they ended up having to do their real job, which is to rewire this motorhome and run off the generator and not off the circuit power to protect against things like that. So it's just been a little learning curve."

But Stoddart's favourite story involves paint – and how the cars and motorhome have been given a coat of something normally reserved for the poshest of private jets.

"Because they were in orange and blue, from last year, we had to paint them in record time," he said. "We have a big aircraft painting facility, and I actually pushed a plane, a Boeing 737 that was due to be painted, pushed it out, brought all this stuff in.

"The paint was there for the aircraft, which is like way more expensive stuff then you would ever put on a motorhome. These things got a Boeing BBJ [Boeing Business Jet] paint job."

"It wasn't just the two motorhomes - there's a support truck and everything else, and all the garage panelling was blue and orange. So we had to change all that.

"We had to hire back people that were doing other jobs, get people to work weekends and night times. And kind of long story short, all the painting which was critical, was done literally in, four days on the motorhome, six days to finish the whole lot. 24 hours a day. They brought in extra people and shifted at two shifts at 12. And it was all done." 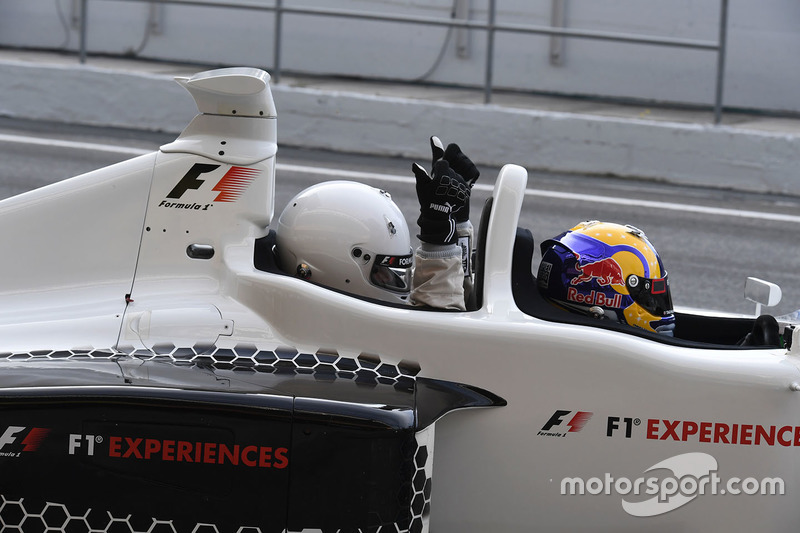 For Stoddart, the days of running an actual team may be long gone, but he seems happy enough being back in the paddock at the races where the experience will run this year – Austin will most likely be next - and putting a smile on people's faces.

"I take away great pride and I feel really privileged to be able to actually allow people to share the experience," he said. "I've done it for 20 years.

"And the best buzz I get is looking at the smiles on people's faces. Or if we put someone's little kid in the seat and let them play with the steering wheel. You just look at the parents and it's like they know that this is going to be that kid's photo for years to come, the day that he got in a Formula 1 car!