Mercedes and Red Bull went in to the Formula 1 season finale in Abu Dhabi well aware that their battle could be decided on straightline speed.

For if one of them could get a top speed edge over the other, then that could prove decisive in holding the advantage over the course of the grand prix itself.

It was no surprise, therefore, that Mercedes stuck at the Yas Marina circuit with the low-downforce rear wing arrangement that it had put to good use in Saudi Arabia.

The wing, which was also used in Azerbaijan, features a top flap comprising a larger V-shaped cutout in the central section of the wing.

Plus there are small cutouts at each end to help with drag reduction, when compared with the low-downforce specification used at Silverstone and Spa.

The wing is also supported by just a single central pillar, rather than the twin arrangement used on its higher-downforce configurations (inset).

This might seem like a small detail but, with less load on the wing, it doesn't need the stability that the twin pillar arrangement might otherwise offer.

This also enables the team to enjoy the aerodynamic benefit that the single pillar should provide in respect of flow on the underside of the mainplane. 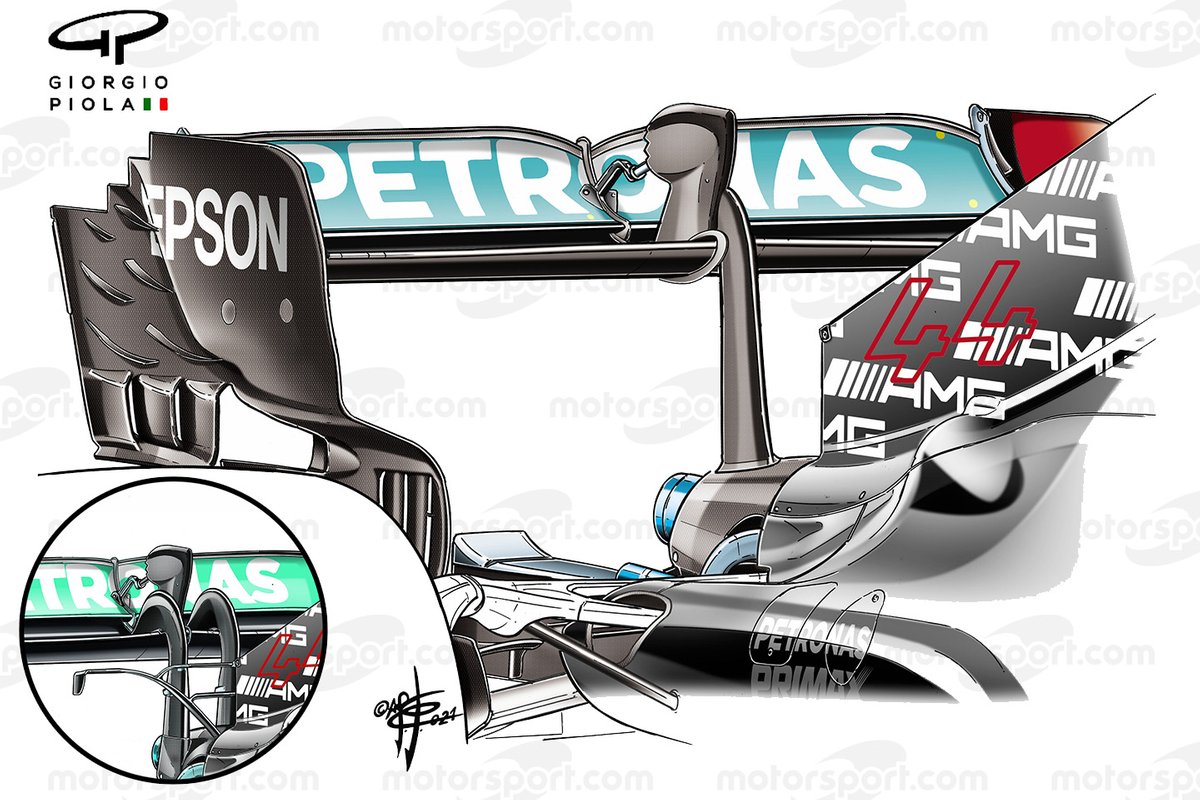 The DRS actuator pod is also combined with the pillar in this configuration, rather than standing on its own, with the overall wing arrangement expected to have a different effect when DRS is open than it would in higher-downforce trim.

It's also worth noting that the team does not run a T-wing in its low-downforce configuration either. 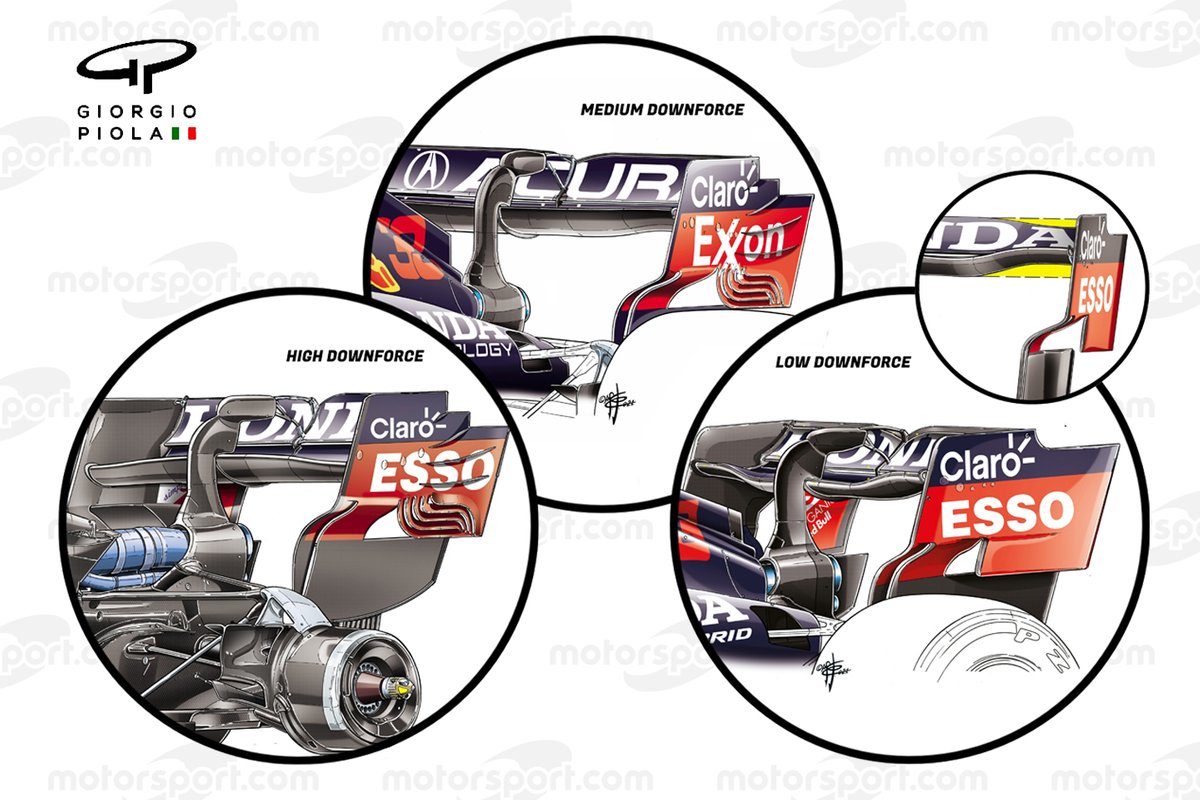 Red Bull appeared to be a little less sure about its direction during its preparation for the weekend, as it once again evaluated whether to run its medium or low-downforce configuration at the rear of the car.

Both drivers used the medium-downforce wing during FP1, a session that is perhaps the most unrepresentative of the weekend, given its timing.

This approach also garners confidence, with the driver able to lean on the car a little more than had they started on the lower-downforce option.

For FP2, the team switched tact and mounted the lower-downforce rear wing on Sergio Perez's RB16B, whilst Verstappen continued to assess and collect data on the medium-downforce wing.

These roles were reversed as the team went into FP3 but, as the action got underway for qualifying and the race, both drivers had made the switch to the low downforce rear wing.

Both medium and low-downforce rear wings utilise the spoon shaped mainplane design, albeit with the low-downforce having a more abrupt transition and shorter chord in the outboard section.

Meanwhile, the two designs have very different endplate designs in order that they have an impact on the tip vortices created by the wing for the level of downforce and drag being generated.

This results in the medium-downforce wing using the same aerodynamic nuances, such as the louvred section, the upwash strikes and the serrated corner cutout as the high-downforce option, whereas the low-downforce version is a much more plain design.

Red Bull's choice to move to the low downforce wing was in response to the apparent straight line speed advantage held by Mercedes during the free practice sessions.

The change would obviously come with the benefit of being able to hold its own over the course of a qualifying lap, but came with the risk of increasing tyre degradation during the race as the tyre would be more prone to overheating.

As the two title protagonists battled at the front, Ferrari looked to use the last race of the season as not only a way to secure third place in the constructors' championship but also as a way of helping with the development and understanding of its 2022 car. 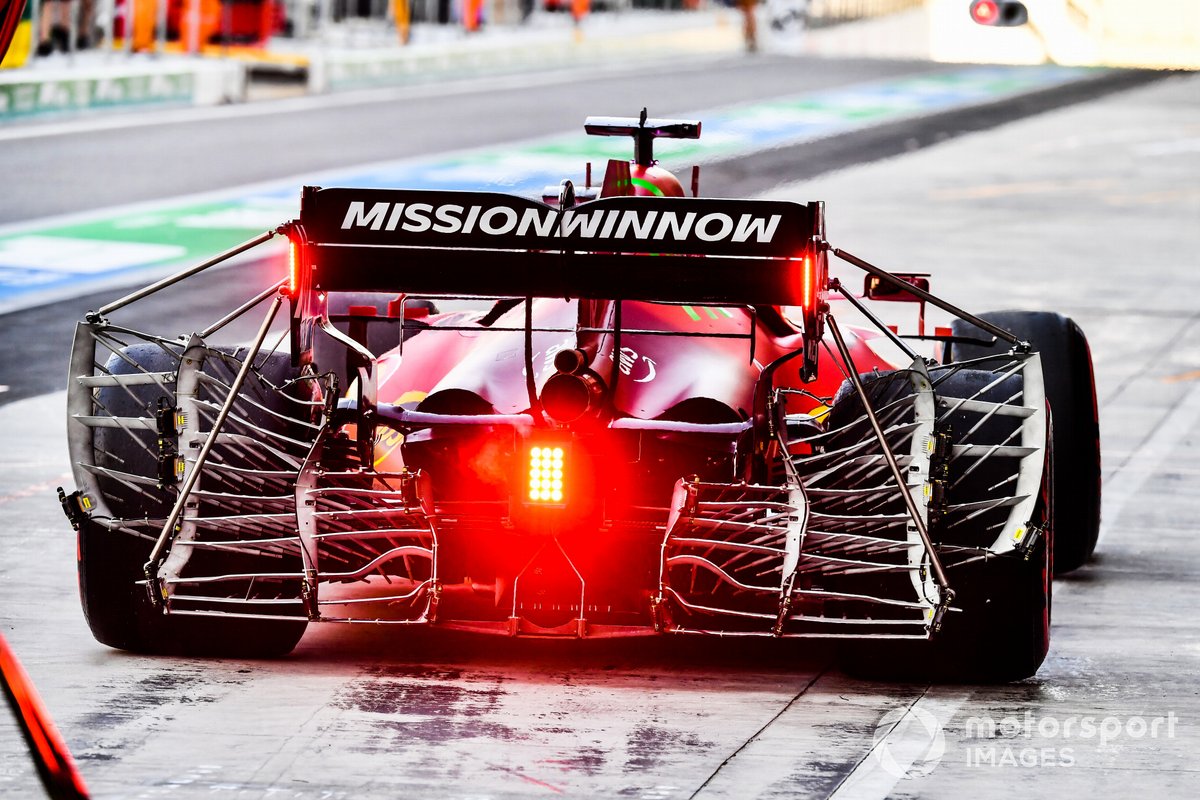 Sensors mounted on the car of Charles Leclerc, Ferrari SF21

The team mounted its large kiel probe rake on the rear of Charles Leclerc's SF21 during the early stages of FP1, in order to collect data on the airflow's behaviour at the rear of the car on the outgoing Pirelli tyres mounted on its 13" rims.

This data will help provide a benchmark for them as it tests with its mule car during the post season test to get a better understanding of the 18" rims and tyre that will be used next season and beyond.