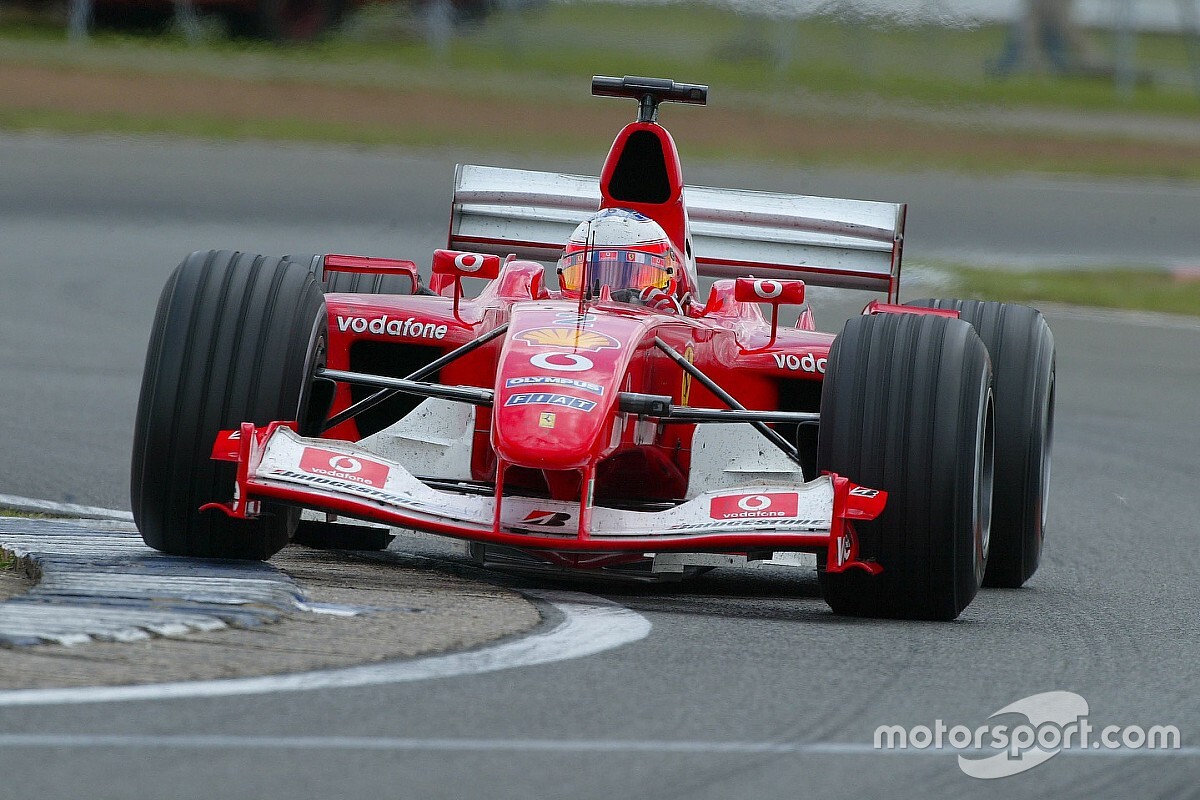 Highly regarded in his early Formula 1 career, Rubens Barrichello spent much of the "Schumacher era" as the clear number-two driver at Ferrari. But in 2003's British Grand Prix - which Formula 1 is streaming today - the Brazilian driver was imperious

Rubens Barrichello may have spent much of his Ferrari career in the shadow of team-mate Michael Schumacher, but he occasionally got to enjoy a day in the sun.

Barrichello scored nine grand prix victories during his time with Ferrari. His charge from 18th on the grid to his first win at Hockenheim in 2000 naturally stands out, but his personal favourite came at Silverstone in 2003.

That year's British Grand Prix is rarely remembered for Barrichello's starring role or fight through the field to victory. But it was arguably the race in which he was at the peak of his powers during his time with Ferrari, turning the tables on Schumacher - even if just for a day.

The 2003 season had been a difficult one for Ferrari, notably dominated by the tyre war with Michelin. Ferrari's supplier, Bridgestone, no longer enjoyed the kind of performance advantage it did through 2001 and 2002. It gave Williams and McLaren the chance to take the fight to Ferrari for both championships and put a stop to Schumacher's domination.

The Bridgestone tyres had struggled in the early part of the European summer, flaring concerns for Ferrari heading to Silverstone. It made tyre choice selections to both Schumacher and Barrichello ahead of the race weekend, but Barrichello opted to go his own way. The team was surprised he had ignored their advice, adamant he would struggle to compete with the frontrunners.

But Barrichello quickly proved his decision was the correct one. After going in a different direction with his car set-up following a mistake in Friday's practice running, Barrichello hooked up a stellar lap in qualifying to score pole position ahead of Renault's Jarno Trulli. Schumacher was over six-tenths of a second off his team-mate, way down in fifth.

Barrichello's hopes of victory took an early hit at the start. He would later complain that Trulli had not kept close enough on the formation lap, causing a long wait for the race start that meant his tyre temperatures plummeted. Barrichello lost the lead immediately, and was also passed by Kimi Raikkonen - Schumacher's main title rival - at Copse. 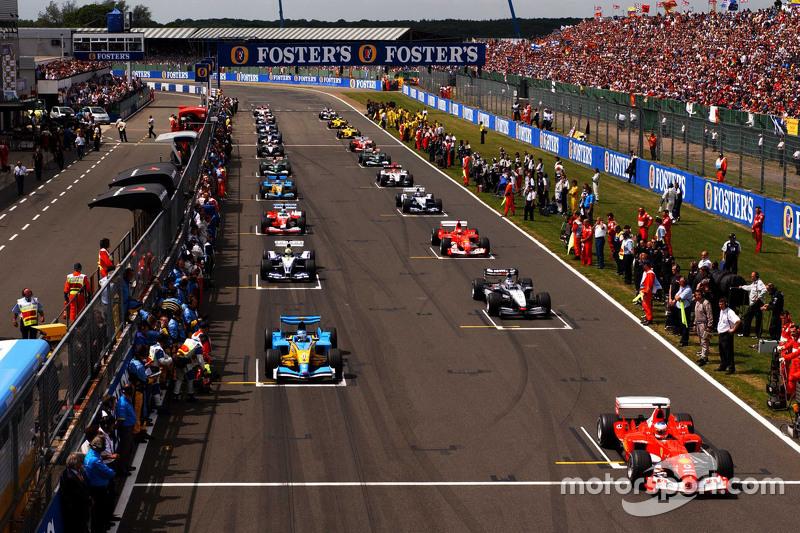 The starting grid: drivers get ready for the pace lap

Barrichello was initially dropped into the clutches of Ralf Schumacher, but soon pulled clear of the Williams to put pressure back on Raikkonen and race leader Trulli. A safety car called for debris after David Coulthard's headrest padding came loose neutralised the race, giving Barrichello a second shot at catching the leaders.

The Ferrari driver wasted little time in making the most of the restart, closing up on Raikkonen before pulling a sublime move around the outside of the McLaren at Abbey four laps later.

And then came the real drama of that year's British Grand Prix. As the cars sped down the Hangar Straight on lap 11, they were met by a track invader, Roman Catholic priest Neil Horan.

Donning an orange kilt and holding signs stating "read the Bible" and "the Bible is always right", Horan ran across the track and forced a number of cars to swerve. He moved back to the grass verge before being tackled and dragged away by a marshal, and later received a two-month jail sentence for the incident.

The safety car was called a second time as a result of Horan's antics, sparking the first round of pitstops. Trulli was able to retain his net lead over Raikkonen, but Barrichello dropped back after taking on more fuel. Both Toyotas opted to stay out after pitting under the first safety car, placing Cristiano da Matta and Olivier Panis first and second. Trulli and Raikkonen sat fourth and fifth for the restart, while Barrichello had work to do from eighth. 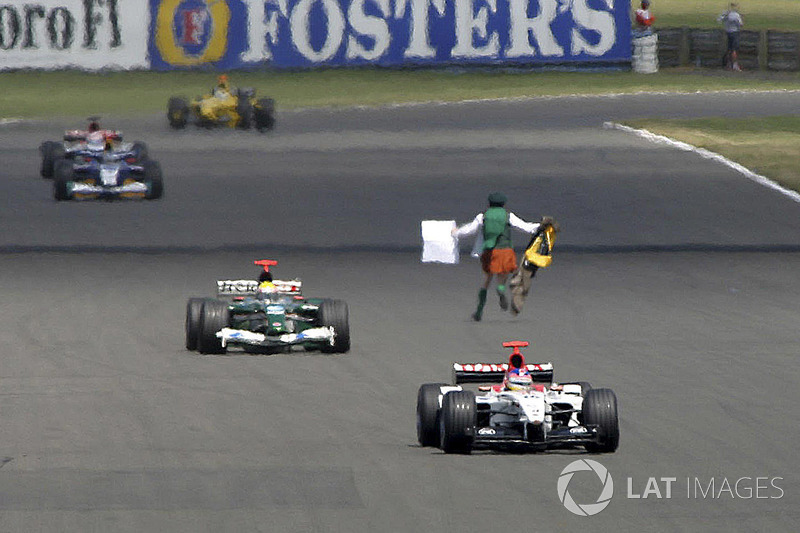 A man runs in front of the cars on track

Raikkonen and Barrichello managed to get a move on once the race resumed. Raikkonen picked off Trulli and McLaren team-mate Coulthard on the restart, and took second off Panis one lap later. Barrichello was able to get ahead of Ralf Schumacher and Ralph Firman, but was then left toiling behind Trulli once again. Luckily for him, Raikkonen had not been able to pull a long way clear as he was stuck behind da Matta, only eventually getting free when the Toyota pulled into the pits. He had a 10-second gap to Barrichello, but the Ferrari was on a charge.

Raikkonen pitted four laps earlier than Barrichello, during which time the Brazilian was able to produce some blisteringly quick lap times on low fuel. While it wasn't enough to emerge from the pits leading, he had cut the gap to just a couple of seconds, and was soon crawling all over the rear of the McLaren ahead.

Barrichello lined up a move around the outside at Abbey again, only for Raikkonen to close him off. A better exit from the corner allowed Barrichello to get alongside the McLaren as they swept through the fast right-hand Bridge corner. Raikkonen ran wide onto the grass, allowing Barrichello into the lead that he quickly built on.

"My passing move on Kimi was very close and I almost lost my nose," Barrichello said after the race. "It was an aggressive but fair fight."

Barrichello saw out the closing 18 laps with ease, crossing the line with a five-second advantage over Juan Pablo Montoya, who had fought up to second, while Raikkonen was a further five seconds behind in third place.

It was a gutsy win Barrichello had to fight for, and one that went a long way to hit back at criticism he had faced after just one podium finish in the previous four races. 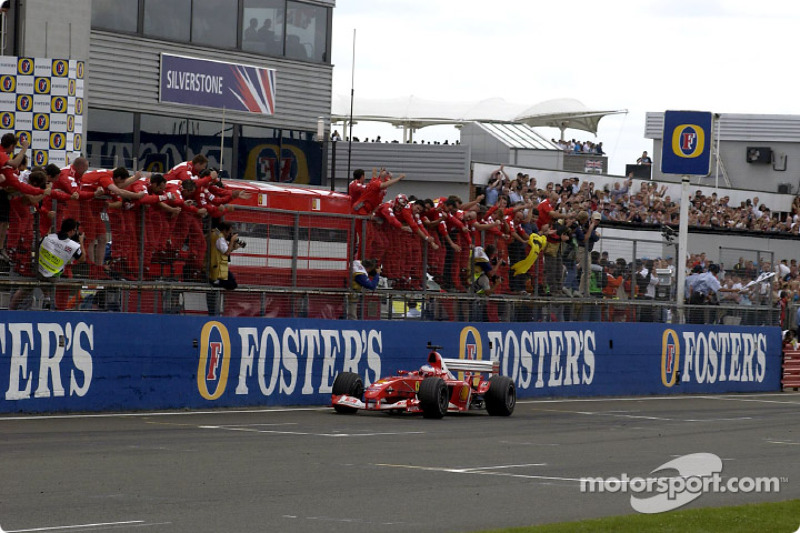 "It is fantastic feeling. I came in for a lot of criticism after Canada and France and I feel this performance answers my critics," Barrichello said.

"The race was hard work but entertaining. I had a great car today, the result of all the work we have done and the Bridgestones were phenomenal. My engineers did a great job to give me such a good car so that I could attack and overtake. Your last win is always your best, and this one certainly ranks highly."

Not only did it hit back at his critics, but it also proved that Barrichello could lead Ferrari when Schumacher struggled. The then-five-time world champion fought back to fourth, but was a distant 25 seconds behind his teammate.

Speaking last year on F1's Beyond the Grid podcast, Barrichello picked this race as his favourite victory - but not chiefly because of his overtakes, but for his strength in going his own way with his tyre choice.

"I think it was my tyre choice in 2003 when I won Silverstone," Barrichello said.

"They said: 'You're crazy, you're never going to make it work'. I said: 'Ooh, I like that tyre', and Michael never went to that tyre. I was superior, so much superior, when I put it on pole.

"I took a tyre choice because that great feeling of driving that car in Silverstone, I was euphoric driving that car. I was so much superior than any other on that track that day. I think it's the high point." 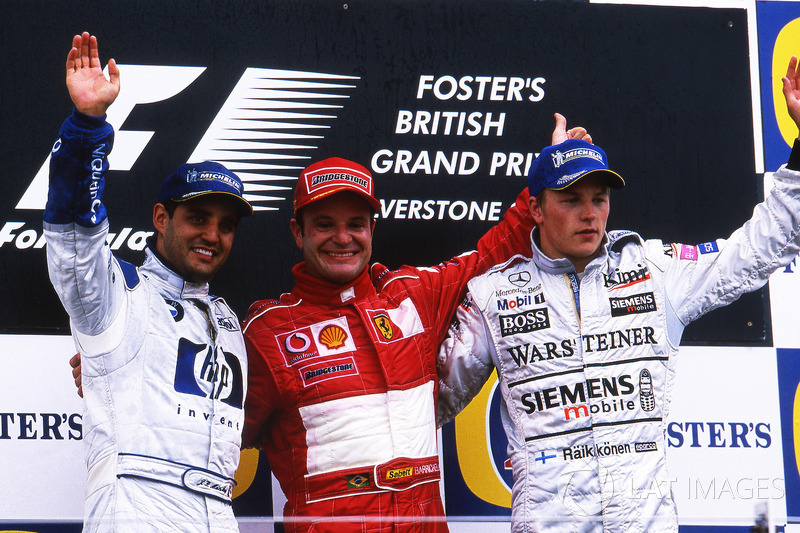